Weather radar has come a long way, showing much more today than the stormy conditions ahead. Windshear and turbulence detection is being integrated into on-board radar systems, as are terrain and traffic warning systems. Pilots now can be presented different warnings of the three major hazards–traffic, weather and terrain–and even have indicated the hazard that needs priority attention.

Not surprisingly, the leader in weather radar is subject to debate. "I think we’re ahead as far as revenue and number of customers because of our extensive retrofit business," says Gordon Carter, director-radar products business development for Honeywell. "We also have a slight lead in the air transport new aircraft business."

"We’re even with our competitor," asserts Rick Flesner, Rockwell Collins marketing manager for surveillance and safety systems. "The data shows exactly a 50-50 split."

Airborne weather radar goes back more than 25 years, with large high-powered magnetron systems. But the modern era began in 1976, when Rockwell Collins introduced the first solid-state weather radar design. Subsequent improvements include reduced ground clutter, and beginning in 1986, research into forward-looking windshear radar. An accident at the Dallas/Fort Worth Airport spurred regulatory action, mandating either the earlier reactive version or the later predictive-type wind-shear detection for air transport aircraft.

Windshear detection, introduced in 1994, has become a staple on most air transport, regional and business aircraft. But while modern solid-state weather radars can detect considerable turbulence in or around storms, detecting clear air turbulence (CAT) associated with dryer air remains in the test stage.

The latest air transport product from today’s Honeywell is the RDR-4B, which incorporates a windshear enhancement to the earlier RDR-4A radar. For business jets and regional airliners, Honeywell offers the former AlliedSignal RDR-2000 and -2100 systems, as well as its Primus 440, 660 and its latest 880 weather radar system, which has turbulence detection.

Since the windshear hazard is greatest on approach or takeoff, Honeywell’s weather radar’s windshear mode automatically activates when the aircraft is below 2,300 feet. The radar adjusts all parameters required for windshear detection and alerts the pilot through an icon displayed on his weather radar screen and through an aural warning. Weather radar system components include an antenna, a transmitter/receiver, and a digital signal processor. Information is displayed either on a stand-alone weather radar indicator or on a flight instrument–usually the navigation display.

Honeywell says it will soon offer its newest feature in the RD-4B system–automatic tilt control–integrated with the former AlliedSignal enhanced ground proximity warning system (EGPWS). The auto tilt will use the terrain altitude information from the EGPWS to determine the radar antenna’s optimum tilt angle. Honeywell designed it to reduce ground clutter on the display and eliminate instances in which pilots missed a weather indication by failing to set the tilt.

"Current, or previous automatic tilt features [not tied to EGPWS] were useful to the pilot," says Carter. "But now with the ability to introduce terrain-based GPWS technology into the auto-tilt solution, it will reduce the pilot workload and improve situational awareness."

Pending FAA certification, the auto-tilt feature will be available first in retrofits and then on new Boeing and Airbus aircraft, Carter adds. It also will be made available with a smaller 24-inch (61-cm) antenna, designed for smaller jetliners.

Rockwell Collins, which provides a 28-inch (71-cm) air transport antenna, says that its WXR-700X forward-looking windshear weather radar records windshear components "telling us exactly what the conditions were when the pilot received the windshear alert. This helps us change the algorithms in our radar and eliminate erroneous warnings, that can be set off by traffic on a bridge, for example," Flesner explains.

Rockwell Collins introduced its wind-shear weather radar in 1995 and enhanced it in 1998 with a terrain avoidance and warning system (TAWS) interface using a 429 databus. The company added a traffic alert collision avoidance system (TCAS) to the mix to provide, like the Honeywell system, an integrated prioritized warning system. A major TCAS supplier, Rockwell Collins had its new generation TTR-921 certified last year. Honeywell expected to unveil a new TCAS product this summer.

Rockwell Collins’ other weather radar products for commercial use include the TWR 840 and 850 systems for corporate and regional aircraft, the latter model containing windshear detection. To further enhance its weather radar products. The company plans to offer automatic tilt control/ground clutter suppression, but unlike Honeywell’s system, the Collins radar will not use EGPWS terrain information for that purpose. However, the company would not identify the technology chosen.

Rockwell Collins radar has included turbulence detection for almost 20 years. It currently is developing an enhanced version, working with the National Aeronautics and Space Administration (NASA) and the National Center for Atmospheric Research (NCAR), according to Carol Nickels, weather radar program manager. The company provided the enhanced radar along with a modified antenna for flight tests on NASA’s Boeing 757. Tests are scheduled to begin this month.

Collins’ developmental work also includes technologies to detect clear air turbulence. These would give a 20- to 40-nm warning, five minutes or more in advance, to "provide the airlines with some real benefit in turbulence warning," Nickels says.

In still another new development, Collins is considering a vertical depiction on the weather radar display. "You can ‘cursor’ to the storm cell, push a button, and get a vertical slice of the storm–giving its height and range," Nickels explains. "It’s effective up to 40 nm."

Both Rockwell Collins and Honeywell are developing ways to uplink text and graphical weather information via VHF or satellite and integrate it with information from the on-board radar. Collins plans to uplink Nexrad data (like that shown on the TV weather channel) in the NASA B757 tests this month. Honeywell intends to offer the same features in its GNS-XL’s enhanced flight management system (FMS) via its airborne flight information service (AFIS) data link. The GNS-XL is aimed primarily at the bizjet market.

"With current systems, attempts to show turbulence on the screen is not very effective and interpretation is left to the pilot," says Michael Grove, Honeywell’s director of radar products. "The enhanced processing will expose what is dangerous vs. what is not dangerous and actually provide alerts to the flight crew, both aural and visual."

The enhancement does not claim CAT detection capability, "but studies show that 60% to 70% of turbulence events out there now can actually be detected with X-band radar, and a majority of these problems can be solved with these [advanced signal processing] changes. We plan to introduce this enhanced capability for the RDR-4B system in the early 2001," Carter reports.

Since clear air turbulence generally is associated with drier conditions, it remains at the low end of the reflectivity scale and thus is harder to detect than weather-based turbulence. In 30% of the cases, X-band weather radar cannot detect it, particularly at higher flight levels. Honeywell, therefore, is turning to infrared (IR) laser radar, or to light detection and ranging (LIDAR). The company has teamed with Coherent Technologies Inc. (CTI) of Boulder, Colo., which developed a system to detect turbulence in very dry conditions. The two companies plan to integrate the product with Honeywell’s weather radar system. The development effort is expected to last two years, with product introduction in 2003. Flight trials were scheduled to begin this summer. The military uses LIDAR for various applications, but this will be its first application for turbulence detection.

"Working with Honeywell, we will be converting this product into an avionics system," says Paul Reveley, CTI’s vice president of business development. CTI and Honeywell, in turn, have a teaming arrangement with United Airlines, which, according to Reveley, provides "insights into airline requirements."

The CTI infrared system will use the signal-processing in Honeywell’s weather radar system. "There will be a fusion of the data between the two sensors [IR and X-band radar] that detect the turbulence, and aural or visual cues will be based on the combined sensors’ ability to detect turbulence in all weather conditions."

As a secondary function, Reveley says, the pilot could direct the CTI-Honeywell system to look above and below the flight path, to find a flight level that produces a smoother ride and, at the same time, boost fuel economy. The IR system’s turbulence detection range is expected to provide a one-minute warning at normal flight speed. The laser uses an "eyesafe" 2-micron beam that transmits and is received through a 4- to 5-inch (10.1- to 12.7-cm) transparent window in the aircraft’s radome. The IR beam is 328 feet (100 meters) long and produces pulses 200 to 500 times per second. It will reflect off particles as small as one micron in size, Reveley claims. And the light that comes back is Doppler shifted according to the speed and direction of those particles entrained in the wind field. All information is processed and displayed in real time.

The New Kids on the Block

The newcomer in the weather radar field is Telephonics Corp., a Long Island-based division of Griffon Corp. It specializes in communications and command systems, including airborne surveillance radar. Best known in the military sector, Telephonics now is moving into the commercial arena, having acquired two weather radar products in February from Honeywell after its merger with AlliedSignal.

The RDR-1400C weather and search-and-rescue radar was designed for helicopters and has maritime surveillance and ground mapping modes. The RDR-1500 has 360ï¿½ scanning, with more range than the -1400C. It also has a beacon mode for picking up signals from emergency transponders. The acquisition helped round out Telephonics’ product line.

"Most of my division is radar, including that used on the AWACS [Airborne Warning and Control System] aircraft," says Larry Rytter, president of Telephonics Command Systems Division. "We’ve learned a lot in the military and paramilitary markets and would like to apply some of that technology in the civil market."

Telephonics’ two new products are aimed at the general aviation and helicopter markets, but Rytter sees moving them up into turboprops and business jets. He admits he is not ready to compete in the air transport market. "We would need a different product, with turbulence detection. But we would like to get into [the air transport market]," says Rytter. "We’re the new guy on the block."

He feels the company could offer windshear detection. "We know how to do turbulence detection," Rytter says. But he is unsure about CAT. "We’re not an IR house," he says. 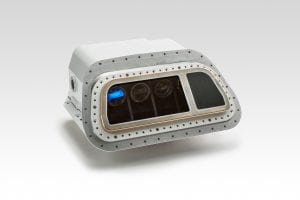 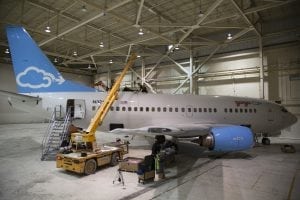