The Federal Aviation Administration (FAA) commissioned a precision runway monitoring (PRM) installation at Minneapolis last year. It allows terminal controllers to operate simultaneous, independent instrument landing system (ILS) approaches to the runway complex at Minneapolis/St. Paul Airport (MSP) during instrument meteorological conditions (IMC). This means air traffic controllers can squeeze additional capacity out of the existing runways even when the weather is bad and pilots can not see each other.

Luckily, We Have TCAS

The multibillion dollar traffic alert and collision avoidance system that the U.S. Congress mandated in the 1980s is installed in all passenger jets with more than 30 seats that operate within the United States.

The TCAS II systems fielded on current jets includes logic version 6.04a enhanced. The system uses a one-second update of the aircraft track files that it monitors. It works in a coordinated fashion with other TCAS II units to derive the simplest, most elegant vertical trajectory for escape possible using resolution advisories (RA) to both aircraft that may be on a collision course. If necessary, TCAS II logic will coordinate a multi-aircraft escape resolution.

The PRM problem with TCAS II is that the air traffic controller is kept out of the loop in terms of TCAS posted resolution advisories. The capability does exist to downlink a TCAS posted RA to the controller; however, the Air Traffic branch of the FAA has chosen not to use that capability.

In a normal blunder scenario, FAA authorized studies indicate that the air traffic controller will note the blunder initiation approximately eight seconds prior to the aircraft targets merging on his/her display. At the same time, the pilots of the converging aircraft will receive a TCAS II alert: "Traffic, Traffic."

If the blunder continues, the controller has a maximum of approximately four seconds to utter and transmit his escape maneuver directions. The pilots then have a further four seconds to maneuver the aircraft before TCAS II issues its resolution advisory. However, the RA can be the opposite of the controller’s instruction because of the coordinated nature of TCAS.

The key to this logjam of logic is that the controller issued instruction always starts with a turn. (The turn is the most effective escape strategy associated with PRM approaches.) If the flight crew is trained to immediately perform the turn, TCAS will not interfere by issuing the RA unless the collision geometry is so compelling that it provides the only way out. In such a case, the technology has done its job.

But here’s the problem: The FAA air traffic control (ATC) group wants to run TCAS in "TA [traffic advisory] only" for PRM approaches. The FAA controllers feel that the potential conflict between a controller’s escape instruction and a TCAS resolution advisory could result in pilot confusion, and ultimately, disaster.

The Air Line Pilots Association (ALPA) disagrees with that assessment. ALPA states that for PRM approaches to be flown at any candidate airport other than Minneapolis/St. Paul (New York’s John F. Kennedy International, Lambert-St. Louis International, Philadelphia International and San Francisco International), TCAS must be operated in the TA/RA mode throughout the approach procedure. Furthermore, the MSP exemption to running TCAS in TA only expires as of the commissioning of any new PRM system.

The next most probable PRM site will be Philadelphia International Airport. It will be commissioned sometime in 2000.

First, however, much has to be settled between the FAA’s air traffic group and the pilots who will operate in the precision runway monitoring environment.

The Federal Aviation Administration’s (FAA) position regarding the precision runway monitoring and traffic alert and collision avoidance system is that air traffic control will retain positive control in the final approach phase of flight when the PRM is in use. That means pilots are required to turn off the RA feature of TCAS and use only the TA function.

The reason for this position is that FAA does not want pilots responding on their own to a TCAS resolution advisory in the close confines of the final approach. The same restriction on use of the RA function applies with simultaneous offset independent approaches (SOIA), which will use the PRM, as well.

A blunder is when an aircraft on an approach to a parallel runway intrudes into the no-transgression zone (NTZ), the 2,000 feet of space between the two parallel runways. Flight by one aircraft into the NTZ will often cause the controller to send the aircraft approaching the other parallel runway around. In other words, the blunder by the first aircraft caused the second one, through no fault of its own, to go around.

However, during the post flight briefing, one FAA test pilot noted something that he said could be "potentially confusing." It seems that a blunder had caused his traffic alert and avoidance system (TCAS) to emit both a traffic alert (TA) and resolution advisory (RA), and the RA did not provide the exact same instruction to divert as the controller.

The solution immediately suggested was to turn off the TCAS' RA mode, which would, therefore, preclude the system's aural commands to either "climb," "descend" or "increase descent." According to Steve Lenertz, technical representative for the National Air Traffic Controllers Association (NATCA), the FAA test pilot's suggestion essentially established the FAA policy to kill the RA mode during a PRM approach.

At the time, says Lenertz, no one seemed to find much fault with the procedure. "But that soon changed. As Air Line Pilots Association (ALPA) representative Terry Hanson points out in the accompanying comments, the pilots vehemently oppose any TCAS degradation at any time. According to Lenertz, the controllers are in agreement.

The NATCA official claims that, initially, the policy regarding TCAS modes "didn't matter" to controllers and adds that TCAS’ impact has "never been tested." Lenertz says he has been "inclined to agree with the pilots and leave TCAS alone because, number one, it's a good piece of equipment...TCAS logic now is very accurate." But another instance convinced Lenertz that the FAA policy of turning the RA mode off during PRM approaches is flawed.

"We had a situation in which the pilot of an aircraft went to turn the RA mode off and inadvertently turned the transponder off," he recalls, noting the PRM tracks the transponder. "We lost [contact of] the airplane on final, and we had to break out the other aircraft.

"If there are conflicting instructions

[between the TCAS and controller], then we'll cross that bridge when we come to it," Lenertz adds. "I think it will be a remote situation, so we [air traffic controllers] think it is best to keep it [the TCAS] in TA/RA."

The heart of the precision runway monitoring (PRM) system, made by Raytheon Systems Co., is its non-rotating, electronically scanned (E-SCAN) radar antenna, run on a one-second-update rate. It is almost five times faster than a standard terminal approach radar's 4.8-second update. Also, because of the nature of the "steerable" scan, the PRM is much more accurate along the final approach and departure axis.

"We can detect targets 60 feet apart at up to 32 miles," says Steve Lenertz, of the National Air Traffic Controllers Association (NATCA). "It's more accurate than ILS [instrument landing system].

"It can frustrate pilots," he adds, "because we give them corrections when they think they are 'on the money.' "

The PRM system comes with large, 20-inch (51-cm), high performance, color displays, and an automated caution and warning system that alerts the controllers whenever a pilot deviates enough to "blunder" into the no transgression zone (NTZ) that lies between parallel runways while simultaneous operations take place.

The first PRM was commissioned at Minneapolis/St. Paul International Airport in October 1997. Other systems have been, or are to be, installed around the world. 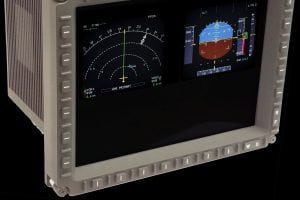