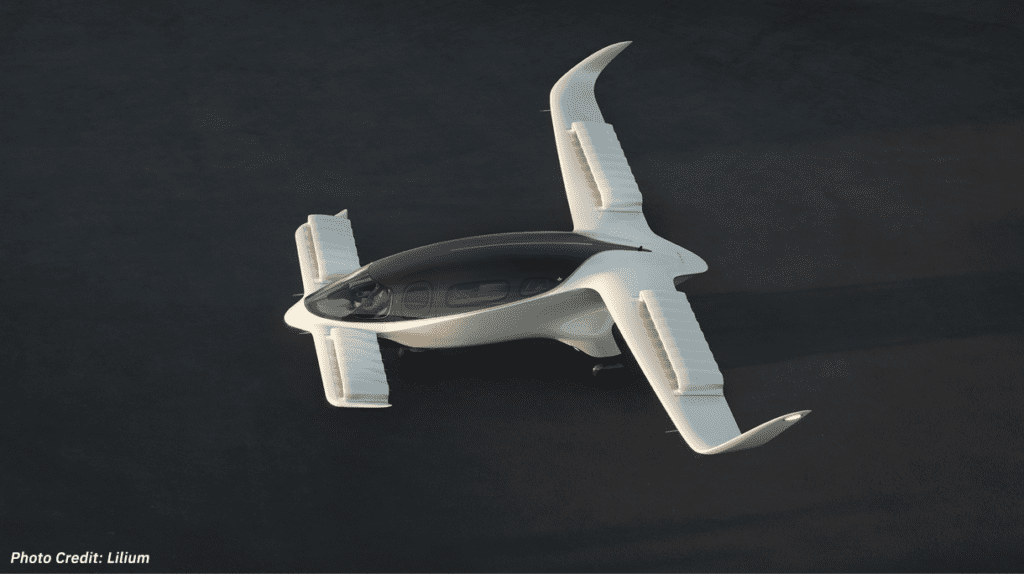 L3Harris' new extra light data recorder was selected by Lilium to use in its eVTOL aircraft. (Photo: Lilium)

According to L3Harris, their extra light data recorder weighs 2.43 pounds, and it has a large storage capacity for audio and flight data within a crash-protected memory module. “Our xLDR leverages our field-proven platform to reduce weight and provide other enhancements specific to the eVTOL market and small aircraft specifications,” noted Alan Crawford, President of L3Harris Commercial Aviation.

Flight data recorders (FDR) perform the same general functions for a range of aircraft, but there are a couple of differences between an FDR designed for the commercial and business aviation markets versus smaller aircraft, like eVTOLs. Darshan Gandhi, Business Development Manager at L3Harris, explained that larger aircraft will typically use two flight recorders, one for voice and one for flight data. “They are spatially separated to provide redundancy,” he told Avionics. In comparison, an eVTOL aircraft would only need one FDR because it is a much smaller vehicle. 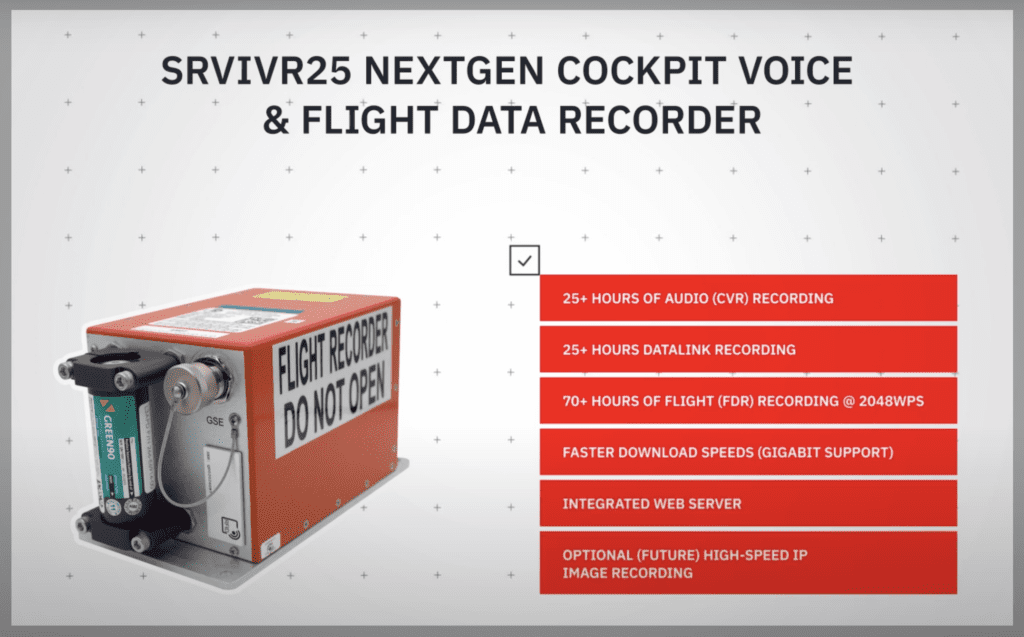 The L3Harris SRVIVR25 series of 25-hour cockpit voice and data recorders received TSO certification from the FAA in May 2020. (Photo: L3Harris)

Another difference is how crash-resistant the recorder needs to be. L3Harris’ recorders for commercial and business aviation, for example, can support pressure depths up to 6,000 meters, according to Gandhi. He adds, “You don’t have the same level of stringent requirements with eVTOL aircraft. The standards are a bit vague.”

In developing a smaller aircraft like an eVTOL, every component and additional unit of weight needs to be considered. The xLDR has to be designed in as small of a package as possible while still maintaining requirements for survivability in the case of an accident. “That is the balancing act we’ve taken with our recorders, and particularly with the one we’re doing with Lilium,” Gandhi noted.

One of the reasons Lilium selected L3Harris to provide the xLDR is the well-known reputation that the company has for its flight data recorder hardware. ”It’s our division’s bread and butter,” he said. He also remarked that they have worked to reduce the weight of the system even further for the Lilium Jet, while still maintaining compliance and ensuring safety.

The high-level function of a flight data recorder does not change much when designed for aircraft that use electric power. However, because of the higher level of electrification, there will be more sensors, which results in more data and real-time monitoring. Higher quantities of data produced by eVTOL aircraft will be used to monitor things like system performance and battery degradation on an ongoing basis. It will also be useful to analyze any trends in the data that indicate needed improvements for flight operations. 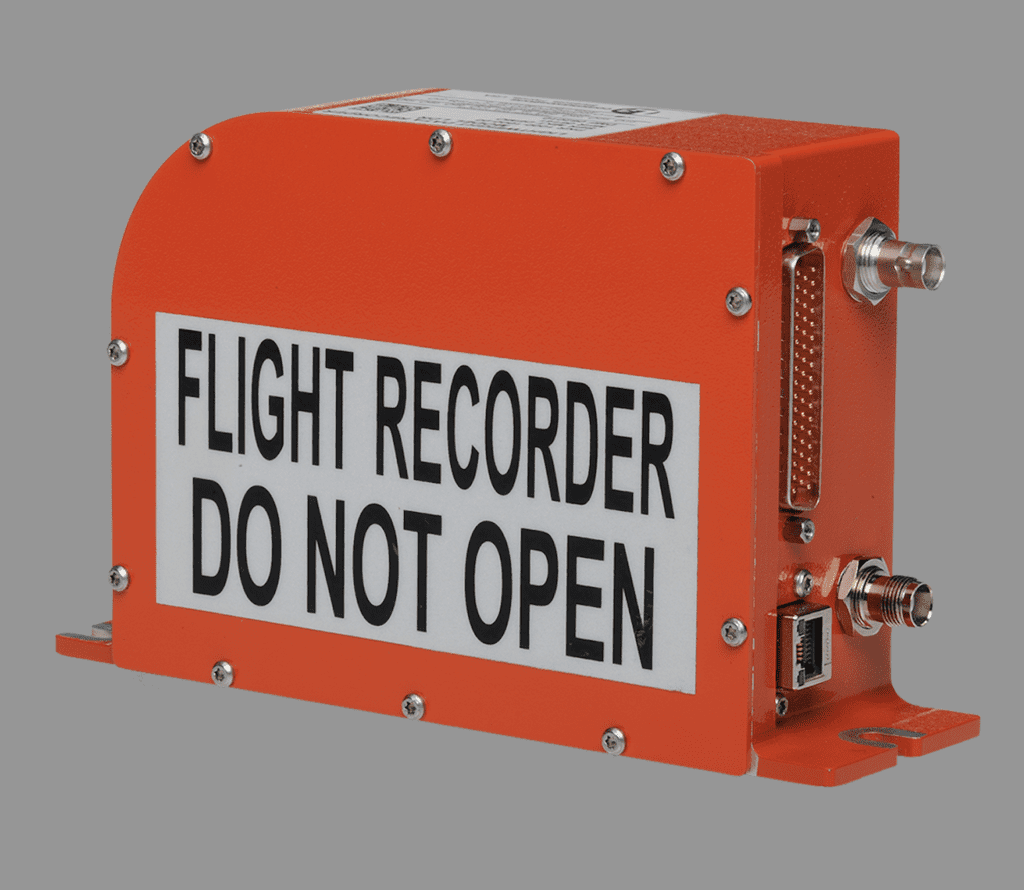 Christopher Jesse, Chief Technical Officer for L3Harris Flight Data Services, explains that the team collects data from numerous sources like flight simulators and weather data, but flight data recorders provide the richest source of data. Their systems receive data from thousands of aircraft, and Jesse expects that their database will record information from 6 million flights in 2022 alone.

The information collected by the data science team at L3Harris is used for multiple purposes. The first one Jesse mentioned is compliance—making sure the flight data recorders are working effectively. “If you have an incident, you want to rely upon that data in the recorder to find the cause of that accident,” he explained.

Secondly, by analyzing large amounts of data, it is possible to predict component failures and perform preventive maintenance. This will be particularly important for eVTOL aircraft, since it is an entirely new type of aircraft with new equipment and hardware, Jesse remarked. “How those are all linked together and work effectively will be very interesting to see,” he said. “It’s a similar framework, processing, and analytics, but the results and insights will be different.”

L3Harris also enables efficiency improvements by collecting and analyzing data. Efficiency usually means finding the best route for fuel conservation. The team looks at weather forecasts, temperatures along the planned route, and any shortcuts that might be cost-effective. For eVTOL aircraft, the focus will be on battery usage and maintaining the efficiency of batteries.

“On the data analytics side, it’s very important to us to make sure that the safety of operation is paramount,” Jesse stated. “A lot of that is monitoring adherence to SOPs.” They look for any anomalies indicating deviations from the standard operating procedures. Even though eVTOL aircraft will use a significant amount of automation to determine optimal flight paths, the data analysts can evaluate how well a pilot adheres to the recommended route. And a lot of issues detected by flight data recorders or flight simulators can be addressed with improvements to pilot training, Jesse commented.