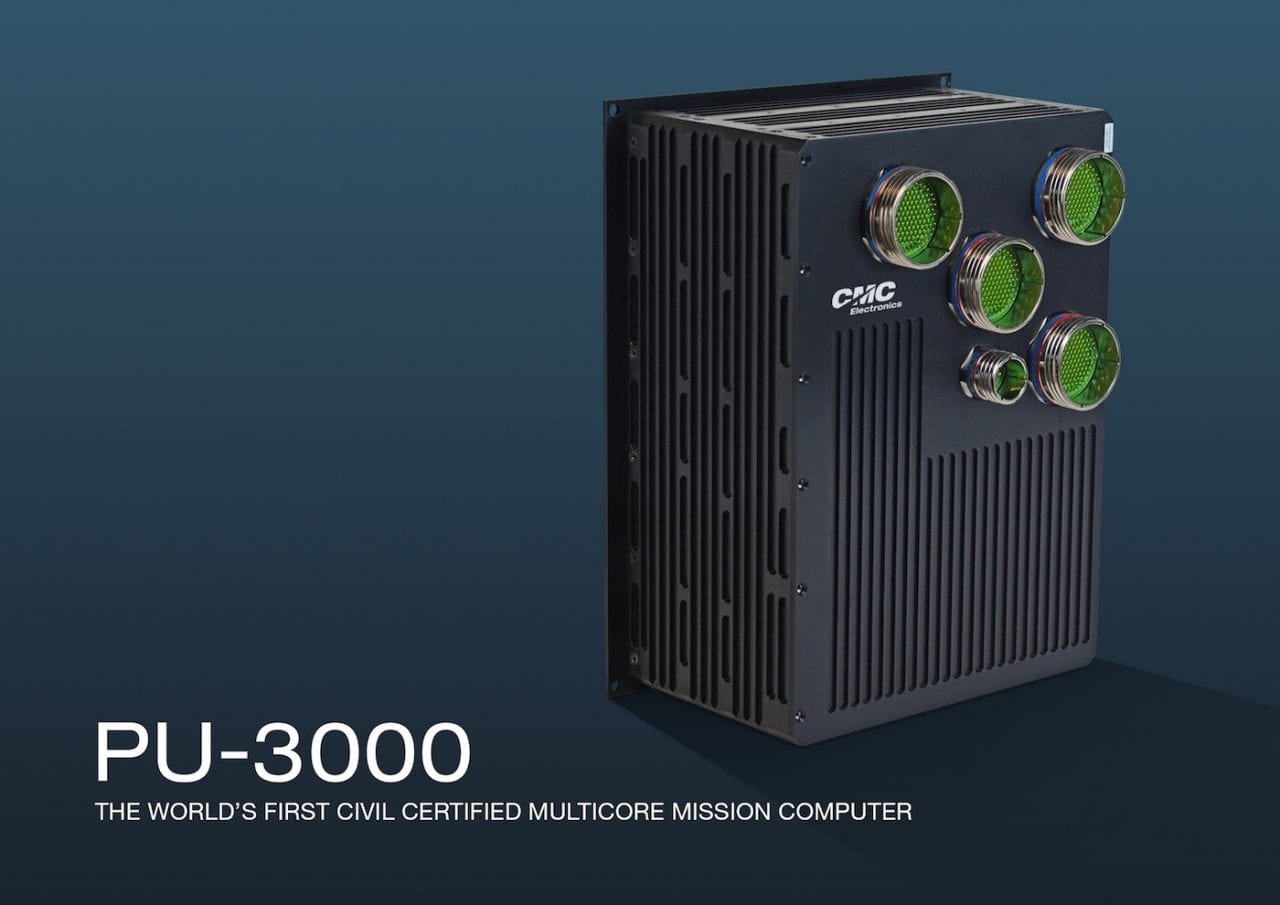 Transport Canada issued a Technical Standard Order (TSO) authorization for the PU-3000 in March, making it the first avionics computer to use multicore processors certified to design assurance level (DAL) A, the highest level of assurance requirements imposed by civil aviation authorities for hardware and software on computers that perform life-saving communications, navigation, and surveillance functionality on an aircraft.

Embedded systems suppliers and avionics manufacturers have been working toward achieving such a safety-critical milestone for many years, as the majority of in-service avionics systems rely on single-core processors. While it can be used to host a range of applications from primary flight displays to flight management systems in one box, the TSO-approved PU-3000 as a flight director under TSO-C198 “Automatic Flight Guidance and Control System (AFGCS) Equipment," according to a March 17 press release.

Kerry Doherty, Director of Strategic Technology, CMC Electronics told Aviation Today through emailed statements that the Montreal-based manufacturer first started exploring the development of new avionics computers based on a multicore system on chips (SOCs) as far back as 2012. He also explained how PU-3000 could eventually be used to enable artificial intelligence and machine learning applications for avionics.

"CMC considers this first multicore TSO as a means to gain experience in dealing with interference concerns and to expose the technology used to the certification authorities," Doherty said.

Computing performance expansion enabled by multicore processors is the result of linking multiple central processing unit (CPU) cores that share the tasks necessary to run an application into a single unit. This allows for the sharing of tasks and resources such as cache memory that would usually be separated out among multiple computers, to be run using the multiple cores of the singular processing unit.

Interference challenges arise when multiple processing cores are used to develop a computer system because it changes the way the system shares resources such as memory or code on an on-demand basis. Running multiple avionics applications on a multicore processor simultaneously can generate interference channels between the applications as they run independently.

Doherty said CMC overcame the interference challenges by using a layered services-oriented design for PU-3000. Providing compliance evidence to the CAST-32A guidance required a detailed interference analysis of all the interference channels present in the system, according to a description of the certification process provided by Doherty.

The 2016 CAST-32A position paper remains the internationally accepted certification criteria for integrating multicore processors into avionics systems and served an integral role in the PU-3000's TSO. The system is designed using several layered services, starting with the Board Support Package, the INTEGRITY-178 tuMP RTOS, Green Hills Layered Products (including the PJFS-178 DAL A File System and ARINC 615A Data Loader), and CMC developed IAP-7000 Platform Services and Drivers.

"When it comes to example applications like a primary flight display or navigation display when analyzing a system to deploy on a multicore platform, we must consider the resource needs and resource sharing that will take place in the final integration.  A number of applications may be at different DO-178C DAL levels. For example, the PFD is DAL A, while FDS and RMS are DAL B.  These applications also rely on a number of common services to perform their tasks, such as Graphics Rendering Services, which would cause significant interference due to this shared resource,” Doherty said. 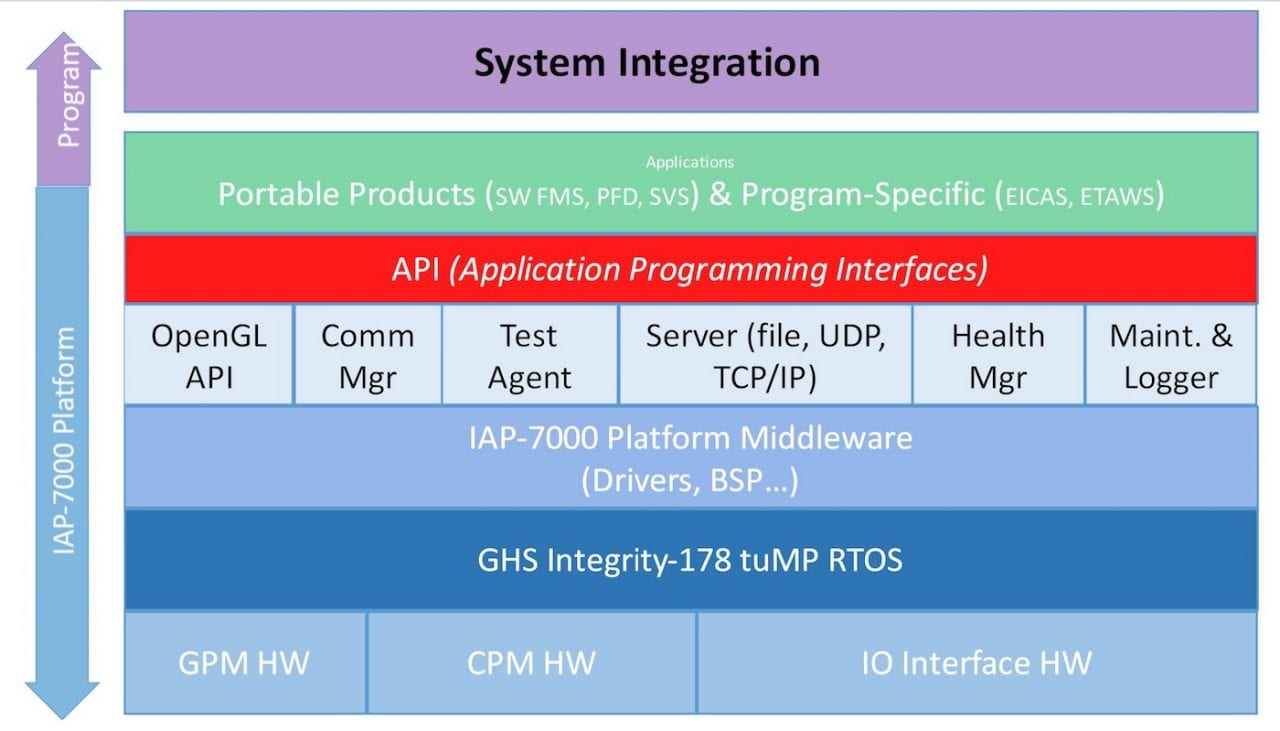 CMC provided this diagram outlining how its new PU-3000's embedded architecture enables the use of multicore processing for avionics systems and applications. (CMC Electronics)

Software applications are integrated into PU-3000 within application partitions and the bandwidth allocation and monitoring (BAM) functionality in INTEGRITY-178 tuMP ensures that each one gets allocated access to shared resources in order to meet their required deadlines, according to Doherty. Under this configuration, time-partitioned applications on one core can run concurrently with applications on other cores.

“A primary flight display task can be viewed as a combination of two steps display state computation and display rendering.  With the software application split into multiple tasks, it could then be deployed over multiple address spaces with less contention for shared resources when deployed on multiple cores.  The GHS Integrity-178 tuMP RTOS allows the integrator to deploy application tasks to multiple cores using the Affinity Group capability and Task-to-Core Affinity mapping,” Doherty said.

Clearing the TSO authorization only marks the beginning of PU-3000's future expansion and the more advanced aircraft software applications it could support in the future, such as artificial intelligence and machine learning. L3Harris has already deployed its first PU-3000 into an in-service fleet, providing CMC with the type of flight hours that will give them confidence in the future to manage higher utilization of the cores for more process-intensive applications.

"With full deployment, significant additional computational bandwidth can be made available for new applications or increasing safety with more redundancy. Once the development and certification process for AI use in Avionics has been established and suitable applications are developed, the PU-3000 could certainly host an AI Application that uses an inference engine," Doherty said.

No civil aviation authority has established standardized airworthiness criteria and engineering evidence for certifying the use of artificial intelligence for safety-critical avionics applications yet. EASA however started participating in government-industry forums on the topic of establishing exactly the type of regulatory path that would allow for AI to exist inside of a primary or navigation flight display.

The agency expects to issue its first certification of a safety-critical avionics application featuring artificial intelligence by 2025.

Among the use cases supported by the PU-3000 include operation as a symbol generator for electronic flight instrument systems, and the ability to generate a variety of display formats including primary and navigation. The common processor module (CPM) at the center of all of this is the Freescale QorIQ P3041.

CMC has also coupled the CPM with an optional graphic processor module.

“We designed INTEGRITY-178 tuMP as a multicore RTOS from the beginning, and our 80 staff-year investment in multicore robust partitioning has paid off for our customers and their customers," O'Dowd said in a statement. "While other companies have talked about getting a multicore certification for almost three years, CMC has actually achieved it using INTEGRITY-178 tuMP.”

Editorial Note: This article is from our upcoming April/May digital edition of Avionics International, which has a central theme of AI adoption in aviation, to be distributed to subscribers later this week. 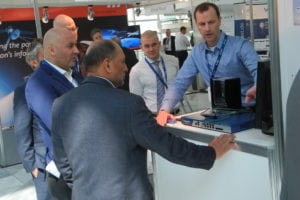