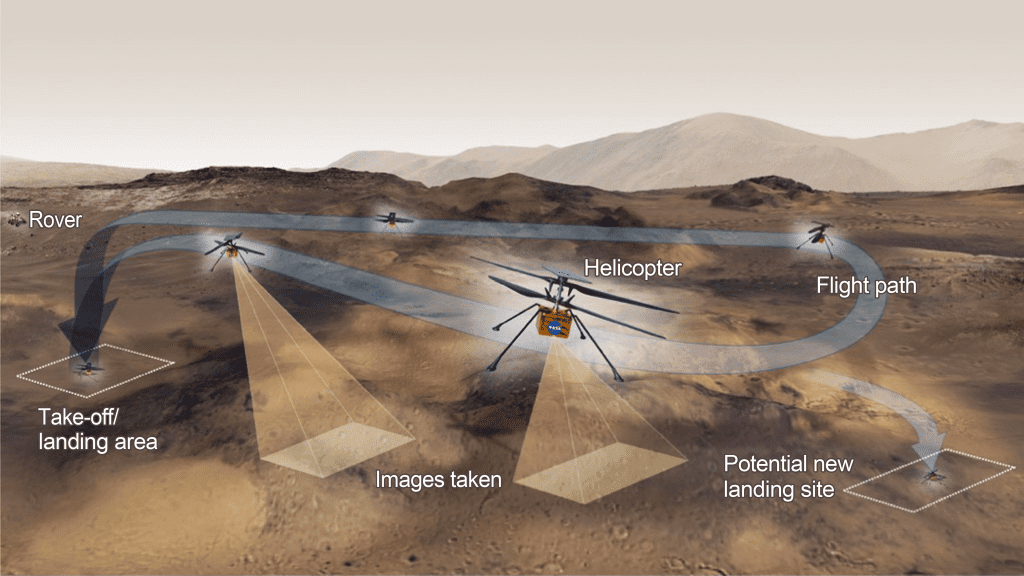 This graphic shows the general activities the team behind NASA’s Ingenuity Mars Helicopter hopes to accomplish on a given test flight on the Red Planet. The helicopter will have 31 Earth days (30 sols, or Martian days) for its test flight program. (NASA)

NASA’s Ingenuity Mars helicopter has survived as a spacecraft and now its team at the Jet Propulsion Laboratory (JPL) is working on its transition into its aircraft duties that could lead it to accomplish the first flight on Mars.

Ingenuity is a small 4-pound helicopter with 4-foot long carbon fiber blades powered by six lithium-ion batteries. It is currently still attached to the belly of the Perseverance Rover that landed in Jezero Crater on Feb. 18.

“This is, in effect, an aircraft that also happens to be a spacecraft,” J. Bob Balaram, Ingenuity chief engineer at JPL, said during a press conference remotely hosted by NASA on March 23. “It has survived launch. It has survived the journey through space with vacuum and radiation. It has survived the entry and descent and landing on the surface on the bottom of the Perseverance rover and it has survived all of the challenges and design issues that are necessary for a spacecraft. But most of all I think of Ingenuity also as an experimental aircraft.”

On Sunday NASA released a photo taken by Perseverance's robotic arm showing the debris shield that once covered Ingenuity on the ground. 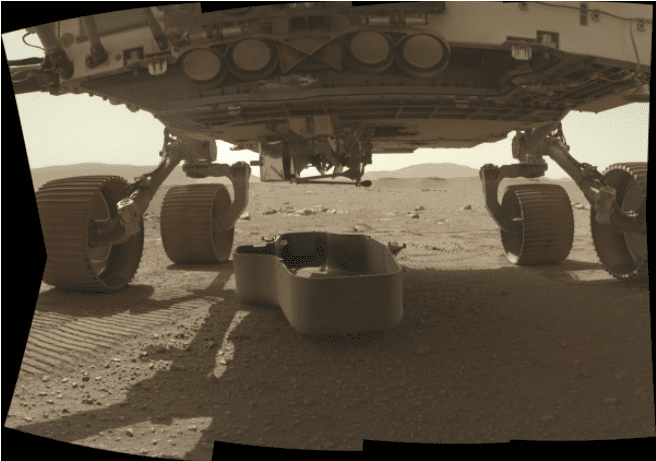 The debris shield, a protective covering on the bottom of NASA’s Perseverance rover, was released on March 21, 2021, the 30th Martian day, or sol, of the mission. (NASA)

“The coolest thing is you can see Ingenuity there all tucked in below the rover doing okay, everything is all in place, and she's ready to get to the surface of Mars,” Farah Alibay, Perseverance integration lead for Ingenuity at JPL, said.

Now, Perseverance is in the process of driving Ingenuity to its airfield. Ingenuity’s team at JPL began scouting an airfield within several hours of Perseverance's landing, Håvard Grip, Ingenuity chief pilot at JPL, said. They needed an area that was flat with few obstacles to make it safe for take-off and landing. They also needed an area within the larger flight zone that was flat but also had texture for the helicopter’s cameras and sensors to navigate with. 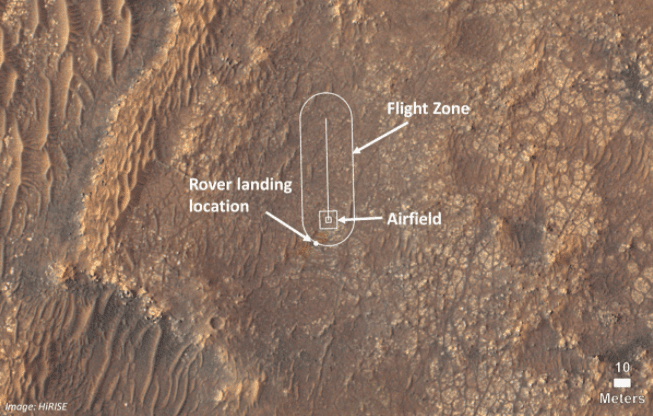 This image shows where NASA’s Ingenuity Mars Helicopter team will attempt its test flights. Helicopter engineers added the locations for the rover landing site, the airfield (the area where the helicopter will take off and return), and the flight zone (the area within which it will fly) on an image taken by the High Resolution Imaging Experiment (HiRISE) camera aboard NASA’s Mars Reconnaissance Orbiter. (NASA)

“We began to look for an airfield and the surrounding flight zone first using satellite imagery and then, as it became available, images taken by the rover itself after it landed, and we began to realize that we might just have a really great airfield, right in front of our noses,” Grip said. “We've really scoured this area we looked at every little rock and pebble within that airfield and measured it, before we finally were comfortable saying, Yes, this is, this is going to be our home base for the helicopter.”

Once Perseverance reaches the airfield there will be a 10-day sequence of critical deployments ending with Ingenuity being placed on the surface and Perseverance driving away.

The location where NASA’s Mars 2020 Perseverance rover will observe the Ingenuity Mars Helicopter’s attempt at powered controlled flight at Mars is called “Van Zyl Overlook,” after Jakob van Zyl. Van Zyl was the team’s longtime colleague, mentor, and leader at NASA’s Jet Propulsion Laboratory in Southern California. He passed away unexpectedly in August 2020, about a month after the launch of Perseverance. (NASA)

“We are at a milestone right now where we are on the surface,” Balaram. “We have successfully exposed ourselves with the atmosphere to the atmosphere of Mars. We are right now in the process of having the rover driver us to our location, which will be our airfield. There will be a long 10-day sequence of careful critical deployments, and then there will be the deposition of the helicopter on the surface.”

These critical deployments involve turning the aircraft from its current horizontal position to a vertical position before it is placed on the ground, Alibay said.

“That's a very prescribed and meticulous process where we separate,” Alibay said. “There's a number of launch slots and attachments that we separate one by one. We're going to be imaging each time making sure that the helicopter is in the expected position before dropping it on the ground.”

With Ingenuity on the ground, Perseverance will drive away, however, this must happen within 25 hours so that sunlight can reach Ingenuity’s solar panels to charge its batteries.

“What's most stressful, is that once the helicopter is separated, we actually have to drive away from it within 25 hours,” Alibay said. “...the helicopter needs photons. It needs sun on its solar panels to charge its batteries, and it can only survive one Martian night without that. So that's gonna be a very stressful period but what I look forward to the most is after we do that drive we're going to get that first shot of Ingenuity, on the surface of Mars on her own there and I just cannot wait to get that first picture I think it's going to be a really great moment for the entire team.”

Ingenuity will then be fully autonomous and wait for JPL to send it commands, Balaram said. It will take a week for the team to test out sensors, server mechanisms, and motors.

“We will go through a number of days of commissioning, approximately a week, where we test out sensors, we test out server mechanisms, we test the motors to make sure they spin right, and we'll be very methodical and even driven as this engineering experiment unfolds,” Balaram said. “Then we will be at a point where we will undertake our first flight.”

Grip said the first flight will include a takeoff, climb to an altitude of three meters, a 30-second hover, a turn while hovering, and then landing the aircraft.

“First of all, the first flight is special,” Grip said. “It's by far the most important flight that we plan to do, it'll be the first powered flight by an aircraft another planet, and we've, in fact met most of our goals for this project, just by getting to the point where we are right now, and will declare complete mission success.”

Ingenuity will have received its flight plan hours before the flight from JPL. To follow this plan the aircraft will use images taken during the flight to navigate.

“It has to work very hard during the flight itself in order to make that happen,” Grip said. “In particular, it takes images of the ground below it at a rate of 30 images per second, and analyzes those in order to track the features on the ground, to see how it is moving across the ground. And it combines that with other sensor measurements in order to make tiny adjustments to the controls 500 times per second, to stay exactly on the trajectory that we prescribed for it, and to fight off disturbances that tries to take it away from that trajectory like winds and gusts.”

“We are very proud to honor that experimental aircraft from long ago by carrying a small piece of fabric on Ingenuity,” Balaram said. “...This fabric is from the original aircraft that flew at Kitty Hawk.” 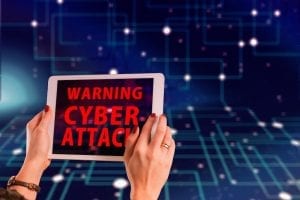 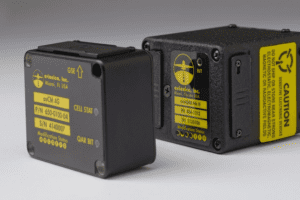