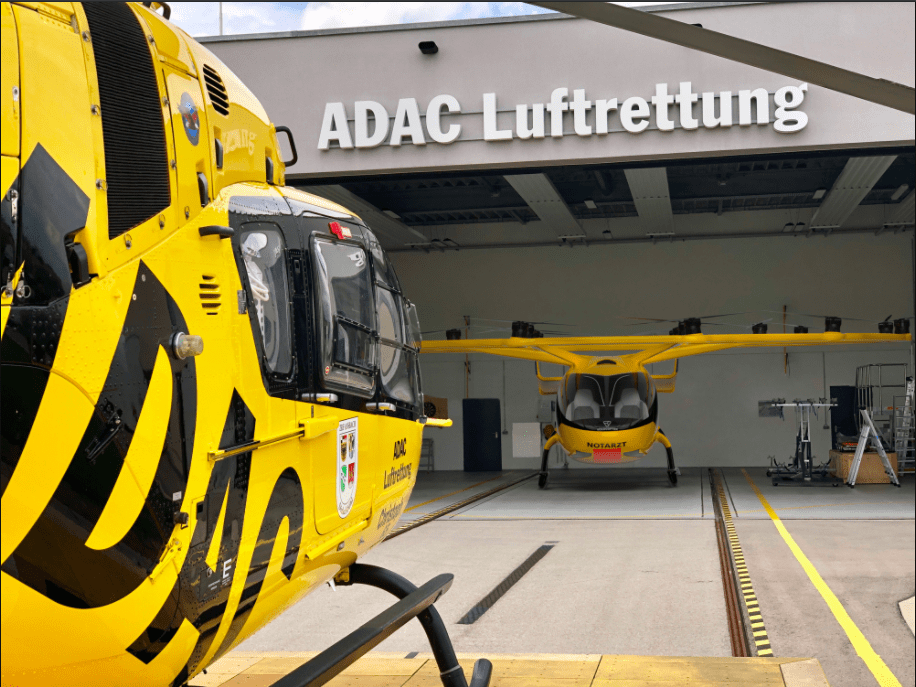 "Multicopter in the Rescue Service," a study produced by German air medical operator ADAC Luftrettung, says the use of multicopters for emergency medical solutions is feasible. (Volocopter)

A new study found that using piloted multicopters in air rescue operations is feasible and could improve emergency medical services, especially in hard to reach places. The study, Multicopter in the Rescue Service, said a rollout could be technologically feasible by 2025, but the use of multicopters would not replace traditional helicopter use–instead be used in addition.

ADAC Luftrettung, a German air rescue service, conducted the study with the sponsorship by the non-profit ADAC Foundation, which promotes research and education to prevent accidents. The study looked at operational and regulatory requirements, political and social challenges, and the economic impact of using multicopters in emergency care.

Patient outcomes in emergency medical solutions are often dependent on how quickly a medical professional can reach them. According to the study, data found by the Federal Republic of Germany from 1994 to 2017 shows emergency doctor arrival time has increased by 40 percent in the last 20 years. The study proposes the use of multicopters to fill this gap because of their tactical advantages when navigating dense urban environments.

“The increasing shortage of emergency doctors is a major challenge for the emergency medical care of the population - especially in rural areas,” Dr. Andrea David, Chairman of the ADAC Foundation, said in a  statement. “For this reason, the ADAC Foundation has supported this innovative research project conceptually and financially from the very beginning. Now, we are looking forward with excitement to the field test as the results of the scientific study make it clear that piloted multicopters can act as fast emergency medical transporters and help solve this serious problem in the near future.”

The study contrasted the transfer time from the landing site to the emergency patient for a driving a doctor to the patient compared to the time required for the transport of an emergency doctor by a multicopter.

“Overall, it can be postulated that the time saved by the airborne transport of the emergency doctor outweighs the slightly longer transfer time at the deployment site,” according to the study.

A chart from the study compares traditional helicopter use to mulitcopters. (Multicopter in the Rescue Service)

The study looked at existing and expected technical developments in multicopters, which would mean that that study does not consider patient transport because multicopters with higher payloads are not projected to be available in a two to four-year deadline. Instead, the focus is on transporting emergency doctors and supplies. Autonomous multicopters were also not considered for this study.

Bavaria and Rhineland-Palatinate were used in the study’s analysis to determine requirements. The ideal deployment radius of the multicopter in this stimulation was found to be 25 to 30 km at a speed of 150 to 180 km/h with a range of 150 km, however, the study states that the even at 80 km/h and a range of 50 km they were able to see significant improvements.

"Rhineland-Palatinate is a rural state with low mountain ranges and valleys,” the Interior Minister of Rhineland-Palatinate, Roger Lewentz, said in a statement. “This terrain brings challenges for emergency doctors and rescue services, who must be with the patient within a short time. On average, the ambulances in Rhineland-Palatinate are already at the scene of the emergency well below the legal deadline. However, we are also pleased that the statistical data available throughout the state of Rhineland-Palatinate allows a closer look at new innovative ideas. At present, piloted multicopters in the rescue service sound all still up in the air, and yet, it would be negligent not to pursue such ideas, like those of the ADAC Luftrettung, in the interests of patients.” 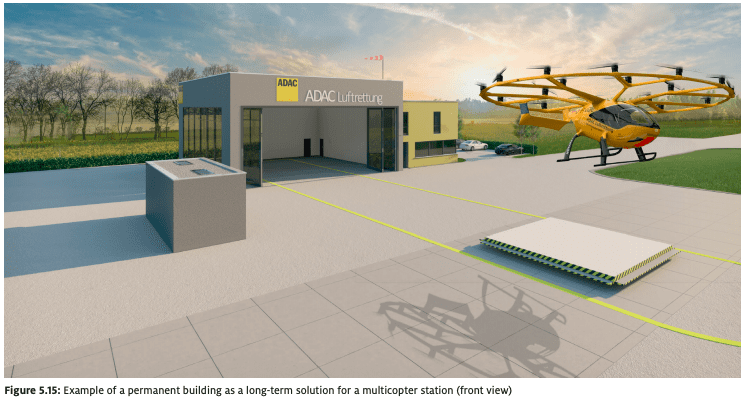 The use of multicopters will require new infrastructure. This is an example of what that could look like from the study. (Multicopter in the Rescue Service)

The study used Volocopter’s VoloCity in its analysis of technical requirements because of its proximity to market readiness. Volocopter is also a partner of the study.

"The VoloCity is the first multicopter worldwide that is already in the process of commercial certification, and together with ADAC Luftrettung, it could already save lives today,” Florian Reuter, CEO of Volocopter, said in a statement.

Multicopters used in emergency care will have to have corresponding systems, like near-vertical incidence skywave (NVIS) and equipment that would automate or assist the pilot while flying in low visibility, according to the study. The payload of multicopters also needs to exceed 200 kg to account for personnel and equipment weight.

The low payload will limit the crew size of emergency multicopters to two crew members. The study presents an operational requirement for the medical profession on the multicopter to have pilot training and the pilot to have medical training because of the limited crew size.

There are regulatory considerations that need to be made before the use of multicopters in these situations would be possible. The study sites the need to clarify the basic classification of multicopters in the air classification, establish safe and legal bases for landing, and improve the scope of authorization of special helicopters. There will also need to be requirements for crew certification.

“According to the rescue service legislation of the Länder (Federal German states), the qualification requirements for the crew in particular need to be examined, as pilots are usually not able to provide additional, comprehensive training as emergency paramedics, but may not even need it if accompanied by a comprehensively trained emergency doctor,” the study states.

The study's researchers found that the public support for use of multicopters for emergency care was considered to be high. This use case would have a direct positive impact on the population compared to the acceptance of air taxi solutions which are still considered controversial. Multicopters would also decrease noise emissions and introduce environmentally friendly propulsion technology that would be an improvement from traditional helicopters.

The Ansbach Rescue Service Area was used to evaluate the economic cost of using multicopters in emergency care.

“Using the Ansbach region as an example, it could be shown that the use of multicopters can reduce the costs of the overall rescue service system, consisting of NEF, multicopters and RTH, by minimizing the number of locations required while ensuring that emergency medical care is provided in line with requirements and throughout the entire area,” the study says. 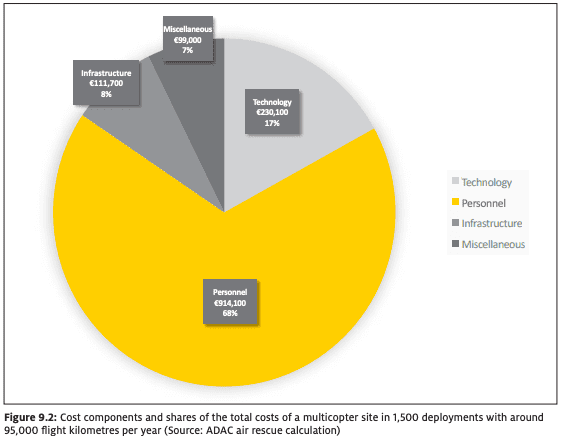 A graph from the study shows the cost breakdown of using multicopters. (Multicopter in the Rescue Service)

ADAC Luftrettung's study also details how energy management, maintenance, infrastructure, staffing, and operating costs factor into the economic impact of multicopters in these use cases. The total projected cost for a multicopter station operating 24 hours/day comes out to €1.35 million (about $1.5 million) per year.

Operational testing is set to begin in 2023 and will take place in the Ansbach rescue service area, the ADAC air rescue station in Dinkelsbühl, Bavaria, and at a multicopter-only base in the Idar-Oberstein region of Rhineland-Palatinate, according to the study.

“The work of the project participants is very impressive,” Frédéric Bruder, Managing Director of the non-profit ADAC Luftrettung, said in a press statement. “Today we are convinced that multicopters can help shape and improve future rescue services. The results are so promising that we will pursue operational testing of the project.” 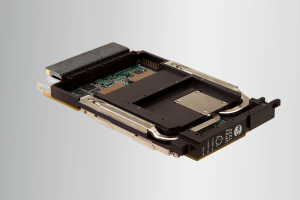