An aggressive timeline has emerged for progress on lower-emission commercial jets, with European governments and Airbus pushing to field a hydrogen-powered commercial product by 2035. Photo: Airbus

An aggressive timeline has emerged for progress on lower-emission commercial jets, with European governments and Airbus pushing to field a hydrogen-powered commercial product by 2035.

And COVID-19, which has decimated the aerospace industry, may in time prove an accelerant to sustainable aviation, with governments attaching significant green strings to bailout packages.

France’s $17 billion bailout includes near-term requirements for its national airline — cutting CO2 emissions associated with domestic flights in half by 2024 — as well as an acceleration of existing plans to transition to sustainable fuel, with $1.7 billion in funding attached for development of a carbon-neutral airplane.

“Between 2033 and 2035, we expect to design a carbon-neutral plane, ten years earlier than planned,” Elisabeth Borne, French minister for ecological and inclusive transition said as the bailout package was announced. "This will enable us to set new global standards for low-carbon aircraft.”

After Airbus and Rolls-Royce cancelled flight tests of their joint E-Fan X hybrid demonstrator program in April, a blog post by Airbus chief technology officer Grazia Vittadini hinted at a shift in company focus toward hydrogen for future sustainable efforts.

That interpretation was all but confirmed last week by Glenn Llewellyn, Airbus vice president for zero emissions technology, who joined a presentation hosted by hydrogen aviation startup ZeroAvia to give some context to the aerospace giant’s shift away from hybrid-electric and toward hydrogen.

“What we saw [in the E-Fan X project] is that, yes, some of the individual technologies are really interesting, but as a combination in a serial hybrid-electric configuration, it was not giving us the disruptive levels of reduction that we need to make over the next years for aviation,” Lllewellyn said.

This conclusion has heightened Airbus’ interest in hydrogen, according to Llewellyn, who described four ways to use hydrogen in aviation:

Across these uses, hydrogen could provide “up to 50 percent of the CO2 reduction that we need,” Llewellyn said, and looks to be highly scalable. 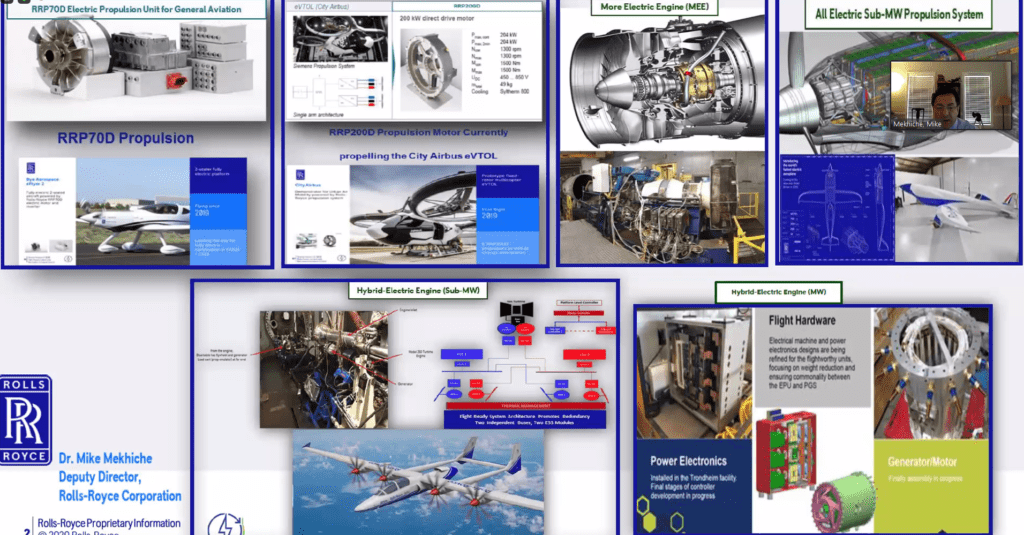 A report released last month by the European Clean Sky Joint Undertaking, prepared by McKinsey, concluded that fuel cell propulsion could reduce the climate impact of aviation by 75 to 90 percent while increasing operational costs by “as little as US $5-10 per passenger.”

For long-range aircraft, unsurprisingly, the report found hydrogen solutions to be “at least 20 years away from entry into service,” in part because larger hydrogen tanks would necessitate new aircraft designs, such as a blended-wing body.

“An inspiring midterm target could be the introduction of a [hydrogen-powered] short-range aircraft before 2035,” the report concludes, defining “short-range” as 81-165 passenger aircraft.

McKinsey’s authors expect a hydrogen fuel cell commuter aircraft to enter service within the next ten years, carrying 19 passengers up to 300 miles — precisely the mission ZeroAvia is working towards in the UK.

Last week at Cranfield Airport, ZeroAvia carried out its first successful test flight of a hydrogen-powered commercial airplane, a modified six-seat Piper Matrix. Funded in part through an Innovate UK government grant, the project intends to culminate in a 250-300 nm flight. ZeroAvia intends to certify a 10-20 seat aircraft with 500 miles of range by 2023 — an ambitious timeline for an entirely new fuel and set of propulsion technologies, though founder and CEO Val Miftakhov believes the overall architecture of a hydrogen powertrain is “more familiar to regulators” than battery solutions.

“We think hydrogen is going to be the future of clean aviation,” Miftakhov said. “Other approaches are either less scalable or deliver just incremental improvements to large segments of aviation. And it can take multiple forms, but … we believe hydrogen-electric is going to become a larger portion of those solution as, from a fundamental perspective, the electrified powertrains have better economics on the maintenance side, and you can have better fuel efficiency [through fuel cells] compared to gas turbines." 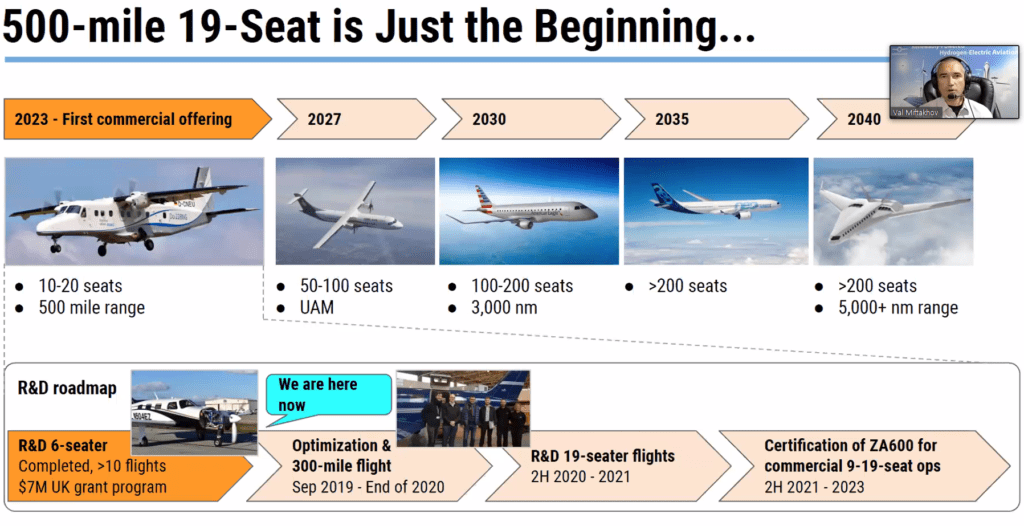 Currently, the only disadvantage of fuel cells to other uses of hydrogen lies in power density, Miftakhov concedes — though that problem doesn’t require any fundamental technology breakthroughs and will see rapid improvements in the coming years.

“We see the path to 1.5 or 2 kilowatt-per-kilogram [kW/kg] power density propulsive systems within the next five years,” Miftakhov said. “To compare, the small turbines that go into the 20-seat aircraft that we’re initially targeting are around 3 kW/kG, and the larger turbines on 50-80-seat aircraft are around 5 kW/kG. We’re not quite there, but we’re starting to close the gap. And as the gap closes, hydrogen-electric becomes a larger portion of the overall market.

Airbus, for its timeline, intends to make technology choices concerning hydrogen around 2024/25, using sub-scale demonstrators between now and the mid-point of the decade with full aircraft prototypes in the late 2020s — all working towards commercial entry into service between 2030-35 for an aircraft with over 100 seats, according to Llewellyn.

Concurrent with developing the technology, Airbus has signed memorandums of understanding with airlines, including easyJet and Scandinavian Airlines, to explore what the introduction of hydrogen aircraft into the ecosystem will look like, including the changes to operational realities, the compromises airlines are willing to make and potentially different business models.

“One of the really important factors in the transition to a new energy type like hydrogen is — how do we initiate it?” Llewellyn said, naming infrastructure as one of the most constraining factors. “How could we imagine the insertion and growth of hydrogen aviation across Europe without every airport being equipped with hydrogen?”

Models developed by Airbus show that a “surprisingly large” amount of European flights could be covered through a hub-and-spoke network, with hydrogen infrastructure only provided at hub airports.

“That drives a requirement for the aircraft to be able to cover the out and return trip in terms of fuel capacity,” Llewellyn said.

Aviation is also unlikely to be the only industry looking to build out hydrogen infrastructure in the next twenty years. McKinsey’s report for the EU Clean Sky Joint Undertaking estimated aviation will account for just 5 percent of total global hydrogen demand, enabling the industry to draw on supply chains that serve other industries as well.

“In summary, hydrogen propulsion has significant, so far underestimated potential to reduce the climate impact of aviation and contribute to decarbonization objectives,” McKinsey’s authors wrote. “To reap this potential, we must develop and deploy new technologies across the board. R&I must be immediately accelerated before we can transition the aviation sector and the industry into a more efficient and decarbonized future.”

To that end, numerous European governments are leading the way, perhaps poised to benefit with a larger share of the hydrogen aviation supply chain. 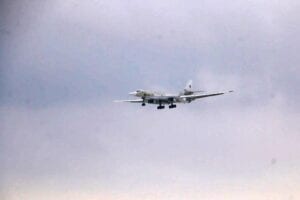 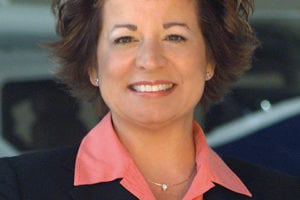