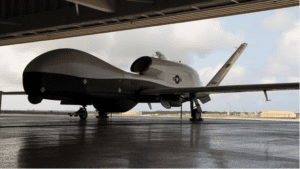 An MQ-4C is shown after its arrival in Guam (U.S. Navy Photo)

The budget request defers planned procurement of two of the high-altitude, long-endurance (HALE) drones for two years until fiscal 2023 to allow for the maturation of IFC-4.

Navy Capt. Dan Mackin, the program manager for MQ-4C, wrote in a May 1 email to Avionics International that the service's budget request includes nearly $178.8 for Triton modernization, including "continued development and integration of the multi-intelligence configuration" represented by IFC-4.

"What we see in the budget request is the pause in production with the intent of putting resources toward R&D on [a] new sensor," Northrop Grumman CEO Kathy Warden said in response to an analyst's question during an Apr. 29 call on the company's first quarter earnings.

"And we had anticipated that so it will be somewhat of an offset to the production pause," she said, adding that "we continue to work with Congress as they deliberate on the budget to determine if we can get those two aircraft added back."

"We do see that it is not just a production pause," Warden said. "This is the continued commitment to the program and investment in additional sensors to make the program and the platform more robust."

In an email response to questions from Avionics International, Northrop Grumman wrote that IFC-4 "will provide Triton with a robust signals intelligence capability."

"The baseline aircraft payload plus the new modifications allow for Triton to operate as a multi-intelligence platform, and enables the retirement of the aging [Lockheed Martin] EP-3E fleet," according to Northrop Grumman.

In late January, two MQ-4C Tritons, representing an early operational capability for the UAV, arrived in Guam to conduct intelligence, surveillance and reconnaissance missions to complement the Boeing P-8A Poseidon.

Northrop Grumman said that it has been trying to reduce costs on the Triton program. A Government Accountability Office (GAO) report last May found that projected Triton development costs had increased 61 percent from $3.5 billion in 2009 to nearly $5.7 billion in October, 2018.

"The original requirements for the MQ-4C Triton did not include the multi-intelligence capability, which was added as a requirement in 2016 to enable the retirement of the EP-3E," Northrop Grumman wrote in its email to Avionics when asked about the development cost increases. "Our partnership with the Navy has been critical in defining requirements throughout the evolution of the Triton program, and Northrop Grumman has taken a number of steps to drive down program costs.  This includes a building a new high-altitude, long-endurance (HALE) production site at our Palmdale [Calif.] facility, where we have implemented lean manufacturing processes to create efficiencies."

In June last year, Iran shot down an older model Navy RQ-4 Global Hawk Broad Area Maritime Surveillance-Demonstrator (BAMS-D), a prototype for the MQ-4C. The Navy bought five BAMS-Ds from the U.S. Air Force as a demonstrator platform before moving to the Triton. 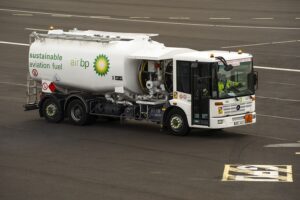