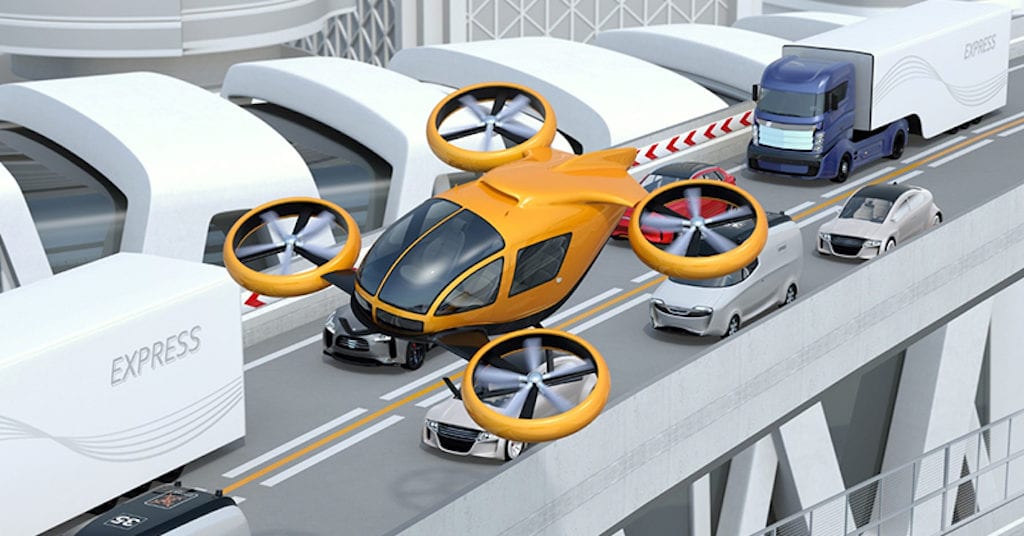 A discussion with Paolo Colombo, global director of aerospace and defense at ANSYS, provides insight on how the company is helping with future development of air taxi and aircraft systems.

As companies are in the process of developing flight control software for next generation air transport aircraft, fighter jets, supersonic airplanes and electric air taxis, Avionics International discussed how certification can be achieved for new applications that have never been seen before in the aviation industry with Paolo Colombo, director of aerospace and defense at ANSYS.

Avionics: When you consider the types of next generation aircraft concepts that are currently being developed ranging from supersonic air transport planes, sixth generation fighter jets and electric propulsion air taxis, what type of complexity challenges do these concepts present for the type of coding necessary to enable their functionality?

Colombo: The first complexity is the exponentially growing single lines of code (SLOC), which is greatly increasing the costs of software development. As an example, if we compare the B-757 released in 1982 with the B-777 released 10 years later, the B-777 has 21X more on-board SLOC, involving approximately 29X times the development effort. We can see very similar trends for military aircraft. Estimated software development costs increased by 300X in three decades. Ensuring that the code is performing as expected, that it is properly debugged and certified, is becoming a huge challenge.

A second level of complexity is the frequency of updates. In the military sector, for instance, you cannot afford to lose your technological superiority relative to other countries, but you also cannot afford to design a new aircraft every few years. You need to invest in a sustainable solution to keep the aircrafts’ capabilities updated. Take the B52 as an example. It will fly for 100 years, but it will undergo a number of upgrades in that time. For every hardware upgrade you will have 10 electronics upgrades and 100 software upgrades. So you need to work on the existing code, change it to work with the new hardware and electronics and have confidence that everything is still working. That is not an easy task. This is why a model-based automatic coding approach like the one we provide with ANSYS SCADE is able to save so much time while increasing the safety of the final product. 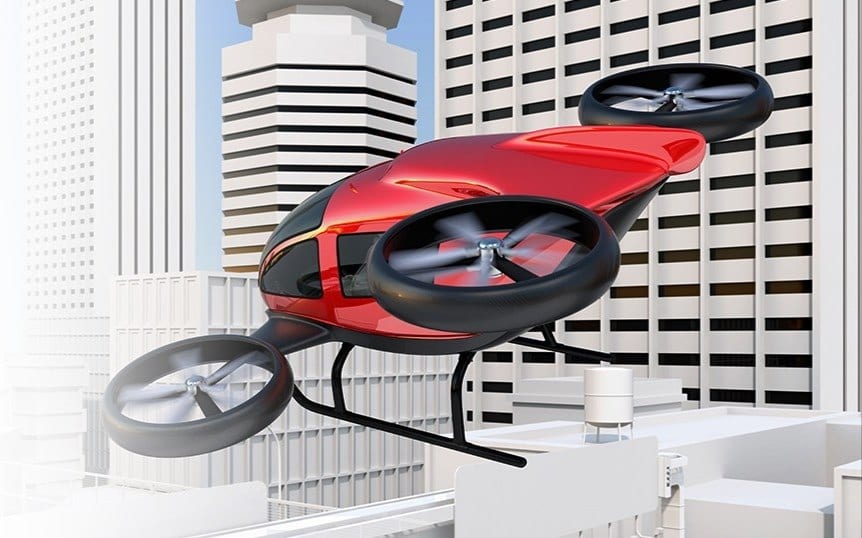 A computer-generated simulation model of what a future electric air taxi airframe concept could look like. Photo: ANSYS

Colombo: Simulation is the only way that aerospace engineers can learn fast enough to overcome new challenges like the electrification of aircraft, where nobody has in-flight experience. And this is true for the design of a single component (a battery, an inverter or a motor) or a complete propulsion system. But you need a real multi-physics, multi-domain approach to explore all the phenomena needed to optimize your system. Take an electric motor, for instance. You have electromagnetic phenomena to consider, which depend on the material you use. The flowing electrical current will have a thermal effect which generates deformations leading to vibrations and noise.

So you need to cool the motor down properly. This is a complex problem involving a number of physics — electromagnetic, mechanical, thermal and fluid dynamics. Furthermore, the performance of your motor will be driven by the control electronics and software. And your motor is just part of a larger system with a battery, an inverter, cables, etc. — all enclosed in the narrow space of a fuselage or a nacelle. Keeping a motor cool in these conditions is a very complex multi-physics problem. You need to optimize each component and each system (including software), and then analyze the complete motor system from a functional safety point of view. ANSYS simulations provide this multi-physics solution to the market.

There are certain safety critical applications being developed specifically for electric air taxis that the aerospace industry has actually never seen before. Does ANSYS have technology capable of supporting this type of development where there is no real previous or existing aircraft type or model to follow?

Colombo: We support certification in many ways, and our customers are using simulation data to integrate the documentation and test results they provide to regulatory entities. We are doing that for icing, composites, EMI and electronic life prediction, among others. Today, because nobody has real experience in some applications, like air taxis, the regulatory bodies are requiring a very deep functional safety analysis. The safety analysis of aerospace systems is carried out in parallel with system development. Analysis methods utilized include functional hazard assessment (FHA), failure condition classification, failure modes and effects analysis (FMEA), failure modes and effects summary (FMES), fault tree analysis (FTA) and common cause analysis (CCA).

These methods need to be carried out at various levels, ranging from aircraft-level through systems to the detailed-item level. A few years ago we acquired and integrated medini analyze, which integrates all these methodologies and performs them at each level. This process eliminates duplication of data while performing the analyses and ensures consistency with the actual engineering models and among analytical methods. Our customers typically see up to a 55% decrease in efforts for functional safety analysis and a similar decrease in time-to-market. On top of that, automatic coding with ANSYS SCADE means that the software generated is certified according to the DO 178-C standard, saving around 50% of the time and cost of the entire development-to-certification cycle.

Avionics: Are civil aviation authorities ready to start embracing the concept of certification by analysis to help accelerate the development of next generation aircraft such as electric air taxis and supersonic jets?

Colombo: They are moving in that direction and ANSYS is working with some of them to do so. There is a strong push by companies, whose development and testing costs are skyrocketing. But this was not always the case. In the past, companies were both promoters and detractors of certification through simulation. They recognized its clear benefits in terms of time and costs, but worried that the creation of a standard, common approach would mean sharing their processes with other companies to conform, risking the loss of competitive advantages they built over the years. I think that the rising complexity of aeronautical systems is helping to overcome this hurdle and facilitate collaboration.

Avionics: Approximately 73% of product development costs are spent by aerospace and defense manufacturers on the test-fail-fix-repeat cycle. How can this challenge be addressed?

Colombo: The consensus is that digital transformation is critical to cope with the increased speed of innovation and the need for more and more testing, in an industry that is traditionally very cautious because of the high safety standards it must keep. Ninety-seven percent of aerospace and defense executives say they are willing to digitally reinvent their business and industry. And the stakes are high. According to McKinsey, “digital technologies can boost A&D companies’ revenue by 5 to 15% and lower their costs by 5 to 10%.”

In A&D, this can make the difference between winning and losing. ANSYS’ experience is that simulation can help companies in their digital revolution. A multi-physics, multi-domain, integrated and open simulation environment like the one we have been offering for 20 years now can increase engineering efficiency and speed up key initiatives, such as fuel efficiency, electrification, additive manufacturing, predictive maintenance and autonomous systems.

Avionics: Next generation cockpits will require, in some cases, a completely new human-machine user interface. By unleashing the full potential of simulation, how can the development times for these new interfaces be drastically reduced?

First of all, with model-based automatic coding software you can design, prototype and create the code and the documentation to certify it in, on average, half the time of classic coding methods. But we can do much more to increase usability, readability, ergonomics and safety of the cockpit of the future. As an example, the recent acquisition of a company called Optis added rigorous optical physics-based simulation to our capabilities, so ANSYS can now simulate human vision in an immersive virtual reality environment. This is of paramount importance as our customers can now prototype their HMI displays and have test pilots try them in a simulated flight in every possible light and weather condition. It is possible to verify the HMI’s functionality, ergonomics and readability without even building a prototype. You can test it in all conditions like fog, snow, a night with a full moon over the water, or whatever you want — without leaving the office. It’s a huge leap forward. Simulation enables you to go through hundreds of cockpit HMI configurations quickly and inexpensively, versus the few configurations you were able to explore using the old test-fail-fix-repeat method.

Of course. Cooling ever-smaller electronic systems subject to higher voltages is one of the main problems we are asked to solve. But the real point is how to design a safe, reliable avionics system. You need to take a holistic view. In addition to pure HMI development, ANSYS’ multiphysics solutions can investigate power integrity, signal integrity, mechanical reliability and thermal problems. Using reliability physics analysis (RPA), the useful lifetime of an aircraft system based on temperature, stress and strain can be predicted. ANSYS has just acquired a company called DfR to add RPA to a workflow which is already able to support electronic design, testing and validation from chip to PCB to case.

Colombo: Moore’s law has changed over time. At the beginning, we were doubling the number of transistors per chip every year, then every two years. Now we are closer to three years. The rate of doubling is slowing down, but the real point is that we are still witnessing an exponential rate of innovation. Every time we think we have reached the limit, engineers and scientists come out with new ideas to take us to the next level. And the next level today means doubling an already huge calculation capacity. Just think about that: Twenty years ago, the US government installed a supercomputer called ASCI RED at Sandia National Labs, the first computer able to process at the teraflop level.

This computer was used to maintain the US nuclear arsenal. Ten years after, you could process 1.8 teraflops from your home, as the Sony PlayStation 3 demonstrated. As computers, electronics and software become more pervasive in our aerospace applications, the speed of innovation will drastically increase, as will the need for new ways to test, certify and use these innovations as soon as they become available. I strongly believe that simulation is the way to do this, and that we are still scratching the surface of simulation’s possibilities. 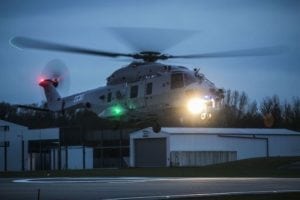