A computer rendering of Overture, the $200 million supersonic airliner that Boom will use 3DExperience to digitally design. Photo: Boom Supersonic

3DExperience is a merging of all of Dassault Systèmes’ computer aided design tools into one platform that will allow Boom to design, simulate and evaluate all of the product life cycle stages of its first supersonic commercial airplane, Overture. Boom has already been using one Dassault Systèmes design tool, SolidWorks, since it first launched the development program for its supersonic airliner in 2014. Now, the Denver, Colorado-based startup is ready to transition its design team to 3DExperience.

Joshua Krall, co-founder and vice president of technology at Boom Supersonic, gave a presentation detailing how his company is using 3DExperience to enable collaboration between their design engineers, program managers and chief test pilot.

“Even in the conceptual design phase, we already have worked with Dassault Systèmes to identify a large number of tools within the 3DExperience platform and more rapidly train the team on Catia modeling. We’ve begun establishing product structure and a requirements database in Inovia and in the coming months we’ll begin using Simulia for structural analysis and systems architecture,” said Krall. “We’re at the start of a decade long initiative to transform the business from a fast moving startup to a mature aircraft OEM.”

Boom is currently manufacturing the XB-1, which will serve as a subscale two-seater demonstrator aircraft designed to allow Boom to perform flight tests at Mach 2.2. The XB-1 demonstrator has a length of 68 feet with a 17-foot wingspan and is powered by three General Electric J85-21, non-afterburning, variable-geometry intake and exhaust engines.

XB-1’s structural and systems designs were completed using SolidWorks, and has allowed Boom to develop calibrated simulation tools to predict whether the design is aerodynamic enough to fly at supersonic speeds, according to Krall. The first demonstration flight of XB-1 is planned for 2020. As the XB-1 marches toward its final manufacturing stages, the design team is shifting its focus toward the development of Overture.

“Unlike most established aerospace companies, we don’t have complex legacy systems and processes in place that prevent us from adopting modern tools today. We have the luxury of being able to jump into the 3DExperience platform from the beginning of our development program,” said Krall.

Boom’s design team will use the “Reinvent the Sky” configuration management engine within 3DExperience to conduct analysis of required system engineering choices and cross reference them with associated trade studies. The technology will also provide Boom with a system digital mock up, and online collaborative modeling applications for mechanical and shape engineering tasks. The team can also use the Reinvent the Sky to create a virtual manufacturing plant and estimate the production costs for materials and engineering tasks once they’re ready to start building the Overture supersonic airliner.

“Smaller innovators need tools for their product development programs that offer them the infrastructure of more established companies yet allow them to stay nimble and incur minimal IT-related expenses. The 3DEXPERIENCE platform delivers this support. Boom Supersonic can create the next generation passenger experience with digital applications that have long been at the core of the industry’s major milestones,” said David Ziegler, Vice President, Aerospace & Defense Industry, Dassault Systèmes.

Boom has already set a $200 million price point for Overture, and estimates market demand to be between 1,000 to 2,000 aircraft for the first generation model. Overture is projected to be capable of traveling from New York to London in about 3 hours and 15 minutes, with round trip flights estimated at $5,000.

Overture could be ready for entry into service by the mid-2020s, although Boom has not set an official projected entry into service date yet. Krall said the aircraft will have a cruising altitude of 60,000 feet and will be capable of serving 500 different routes globally. 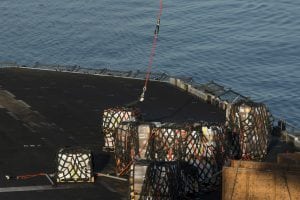