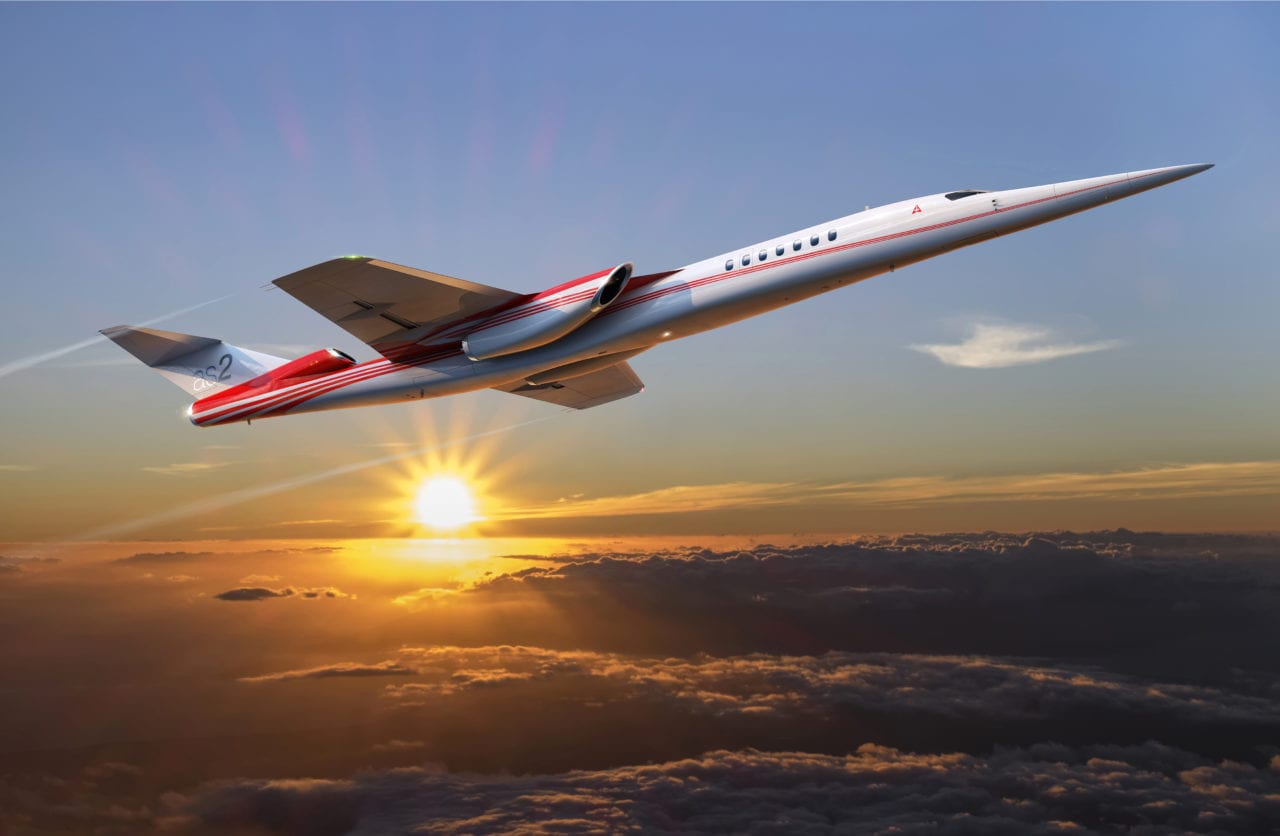 Boeing is investing in and partnering with civil supersonics company Aerion, whose AS2 business jet is expected to be the first to market with a slated 2023 first flight and 2026 service debut. Boeing is replacing Lockheed Martin as a plane-making partner to Aerion in the AS2 venture, though no reason was given for Lockheed's exit.

The companies have not disclosed terms of the deal as of the Tuesday announcement, but Boeing is calling it a "significant investment" in the 15-year-old Nevada company. It appears to have been made by Boeing's central business rather than its HorizonX subsidiary, which the planemaker set up to identify and invest in smaller companies.

The Seattle giant used HorizonX to invest in UK-based Reaction Engines, which is developing hypersonic propulsion, last year. It has also revealed its own hypersonic concept vehicle. Both of those are looking to the more distant future, however.

By partnering with Aerion, which was started by Texas billionaire Robert Bass, Boeing is showing that it wants to be on the cusp of the new supersonic wave — fitting since the company tried to do the same with a supersonic prototype that received U.S. government funding in the 1960s.

"Boeing is leading a mobility transformation that will safely and efficiently connect the world faster than ever before," said Boeing's Steve Nordlund in a statement. "This is a strategic and disciplined leading-edge investment in further maturing supersonic technology. Through this partnership that combines Aerion's supersonic expertise with Boeing's global industrial scale and commercial aviation experience, we have the right team to build the future of sustainable supersonic flight."

Nordlund is the vice president and general manager of Boeing NeXt, a new division of the company focused on "the introduction of a new mobility ecosystem," including urban air mobility and super- and hypersonic flight. He was also the head of HorizonX when it made its investment in Reaction Engines.

Supersonic flight has been functionally outlawed in the U.S. due to noise and emissions restrictions since the European Concorde's final flight in 2003. Developing engine technology and an improved understanding of aerodynamics has reopened that conversation, making it possible that supersonic jets could cut flight times without creating unacceptable noise levels. At Congress' behest, the FAA is looking into regulation changes that would allow supersonic flight in the near future. Aerion promises a savings of one hour on flights from New York to Mexico City or Los Angeles and two hours to London, Tokyo or Shanghai, where more time spent over water would allow for more supersonic flight.

"Aerion is the industry leader mapping out a successful, sustainable return to supersonic flight," said Aerion Chairman, President and CEO Tom Vice. "The AS2 is the launch point for the future of regulatory-compliant and efficient supersonic flight." 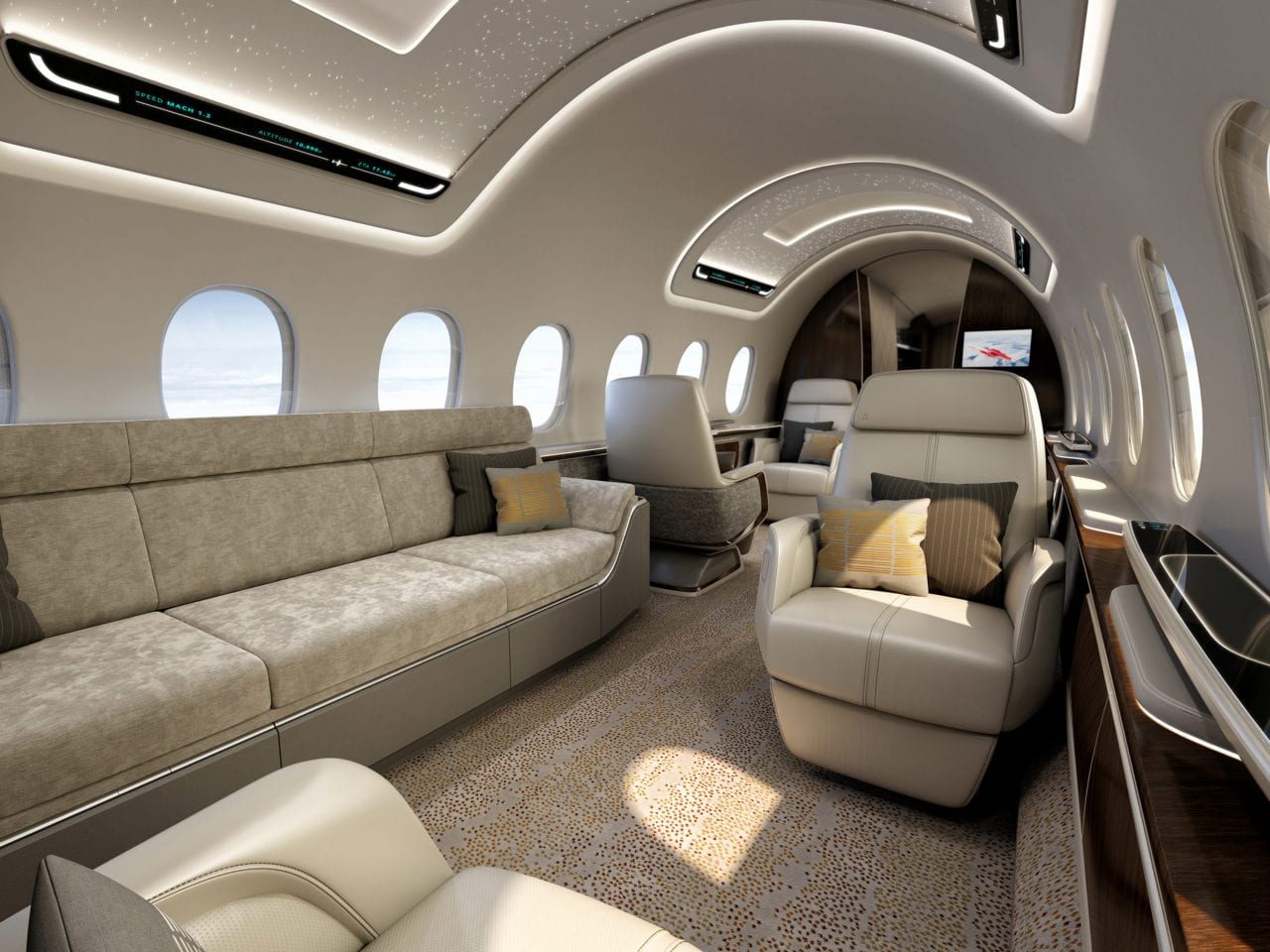 An image of the Aerion AS2's cabin. (Aerion)

General Electric is developing the engine for the AS2, which is called the Affinity and is capable of a 60,000-foot altitude ceiling. The AS2 will be able to hit Mach 1.4, according to Aerion, with an over-land cruise speed of Mach 0.95 without a sonic boom. The company also advertises boomless flight "at speeds approaching Mach 1.2," provided temperature and wind conditions comply and the capability gets approved.

Honeywell is designing the AS2's flight deck. Boeing, under the new agreement, is expected to provide manufacturing help with the planes. Before Boeing, Airbus had signed on to help build the plane in 2014. It was replaced with Lockheed Martin in 2017, but Lockheed is now being replaced by Boeing after about a year. Notably, neither Airbus nor Lockheed invested in Aerion as part of their plans to help.

The first two of the new breed of civil supersonic jets are expected to be Aerion and Boom, both of which are targeting the mid-2020s. While Boom is trying to build an airliner, Aerion is tackling a business jet, which Vice President of Marketing and Communications Jeff Miller has said they think will be simpler than trying to predict airline economics.

Aerion has said that it expects a product design review in 2020, first flight in 2023, type certification in 2025 and entry into service in 2026. The AS2 has a $120 million price tag with an Aerion-estimated market of 500 to 600 units over two decades, according to Miller. With the company expecting to spend around $4 billion in development on the AS2, having Boeing's deep pockets and manufacturing experience on board could be a boon to the supersonics startup.

The Evolution of Civil Aviation Displays