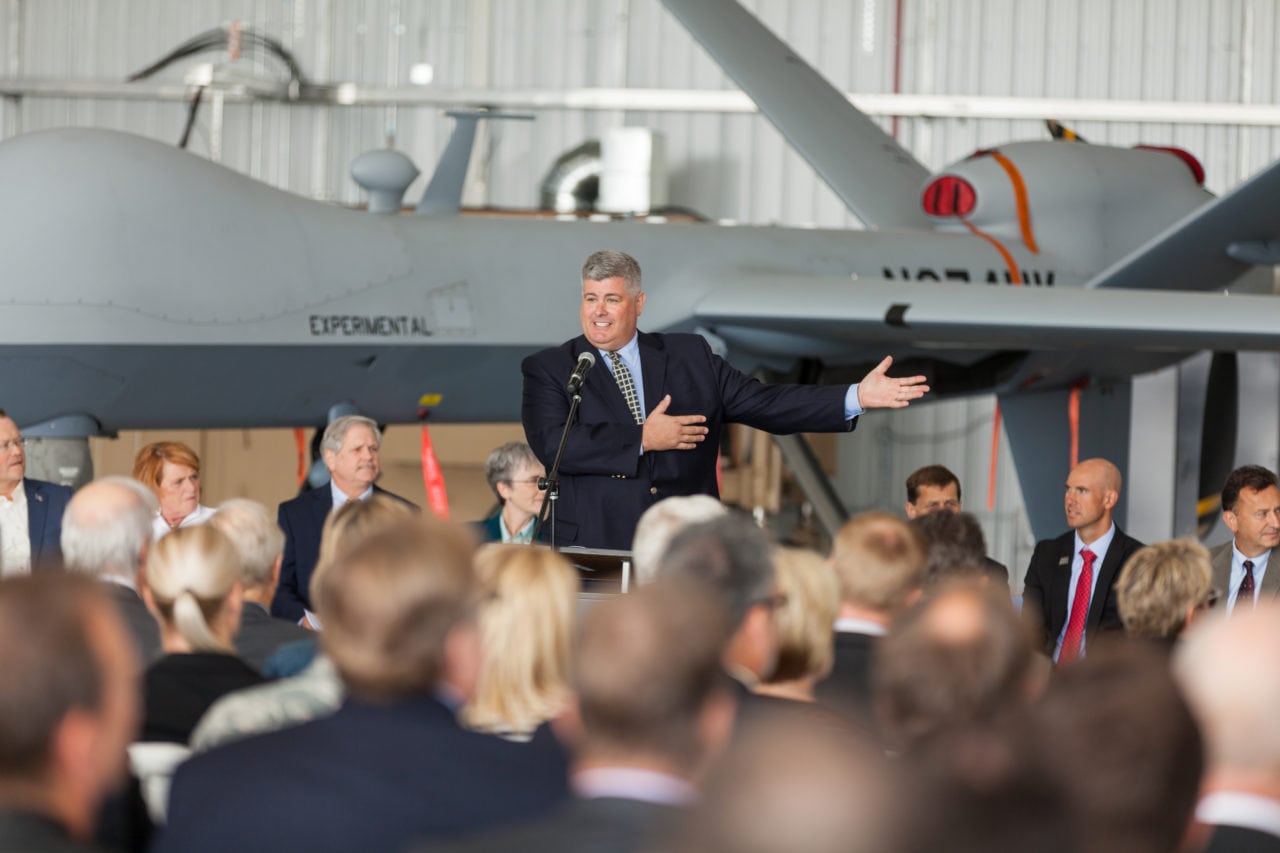 "Companies that want to come and test and develop aircraft or systems or sensors or anything like that, it gives them an ability to operate in a much less expensive environment," said Grand Sky President Tom Swoyer.

Grand Sky is the U.S.'s first commercial UAS-focused R&D park and has a unique agreement with the Air Force base to rent out space within its perimeter and use its runway, which Swoyer said is valuable for attracting defense companies.

Northern Plains holds the certificate of waiver or authorization (COA) from the FAA to allow the BVLOS flights without a chase plane. The COA is in effect for two years and covers a 30-nm area in Grand Forks, outside of the Air Force base's restricted airspace.

Harris provides its RangeVue radar to enable the testing. Instead of a chase plane or keeping the drones within line of sight, which is unrealistic for large UAS testing, the COA allows the use of what Harris calls an "electronic observer;" basically, monitoring the drone through redundant, ground-based radar solutions.

George Kirov, Harris Electronic Systems' VP of commercial UAS solutions, explained that Harris put in ADS-B sensors to couple with the Air Force's powerful DASR-11 radar, which the military is letting the test site use. The RangeVue system integrates that data and filters it to what is relevant so the drone team can remotely monitor the flight for cooperative and noncooperative aircraft.

Given the location of the test site, Grand Forks Air Force Base's approval to share its radar is crucial. Kirov said that in other locations, where he hopes they can replicate the test site, data from FAA radar could be used, but the FAA's nearest radar in Fargo 80 miles south wouldn't provide enough information at this test site.

The benefit right now is to General Atomics Aeronautical Systems (GA-ASI). GA-ASI put down the majority of the money to get the program off the ground. It also provides the ground team as well as the drone. Currently, the COA approves the use of an MQ-1 Predator drone, though Grand Sky's Swoyer said there are designs to extend that approval to MQ-9 Reapers as well.

GA-ASI can currently use the Grand Sky park to test configurations and train operators for commercial uses within that 30-nm range.

"Ideally, we would be able to do this from all of our flight operations locations soon, as this has the potential to significantly simplify operations, increase safety and reduce cost to our customers," said GA-ASI's SVP of marketing in an emailed statement. That is because of the removal of a chase plane to accompany the drones during tests.

Because UAS operators are on the ground and can be switched out, he said, multiple people can get in training over the course of testing for 10 to 12 consecutive hours. Not having to land, and not having to have an additional team to operate an additional aircraft solely to observe, can save a lot of time and money.

There is benefit to being able to conduct BVLOS testing in Grand Forks, but all of the partners admit that the significance of the milestone is primarily in what it might mean for the future.

"This is a proof, not a vision," Kirov said. "It's a demonstration of how we can integrate large commercial UAV in this country, which means heavy cargo carriers — one day, human transportation, anything that cannot meet compliance today with part 107 (drone regulation for small UAS).

Here you have a vision of how this technology actually can enable these, for lack of a better word, highway corridors so the Air Force can the routinely transport these things around: They fly on their own. Usually, you (have to) disassemble them or close down the airspace."

It will take time to get to that point, though. Swoyer said the most immediate next step, after showing that the current setup works safely, is to apply for an expanded range of 60 nm in Grand Forks. At that point, the group could start working in data from the FAA's radar in Fargo to help fill out the airspace picture, he said.

After expanding the approved operating space and getting Reapers approved, Swoyer said it's mostly about continuing that expansion to other aircraft, more space and potentially other companies. He named the Raytheon Solipsys Zeus radar as another radar system the company had interest in integrating and said that other UAS companies are also interested in BVLOS commercial operations.

"If someone told me two years ago, 'Don't worry about it, you'll be flying beyond line of site in two years,' I'd have said, 'No way.' The FAA doesn't want to do that," Swoyer said. "The Air Force is still working out the procedures for how we're going to do it here. What company is going to come in here and put tens of millions of dollars investment down to make it worth their while to do this? And here we are now celebrating all of that."

"Our end game for us is to be able to create a network that we can tie into. I'm thinking upper-Midwest to start, but nationally is certainly on our — pardon the pun — radar," he said.