CBP is looking for new radar options for the P-3. (Customs and Border Protection)

Customs and Border Protection (CBP) this week issued a request for information to industry for market research on new airborne early warning (AEW) radar for some of its P-3 surveillance aircraft typically flown in counter-drug, counter-terrorism and counter-human smuggling missions.

The Lockheed Martin-built P-3s include the company’s AN/APS-145 AEW radar on some of CBP’s fleet of 14 aircraft. The remaining P-3’s are long-range tracker variants equipped with a short- to medium-range radar to help identify and track targets detected by the P-3 AEW aircraft, and electro-optic and infrared sensors, and a marine search radar.

CBP said that the results of its market research will help it plan for a replacement AEW radar. The current radar provides continuous 360-degree coverage and detects suspect aircraft and surface vessels. 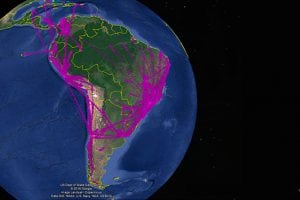