The UK said it has done well with acquisition, but hasn't always been successful keeping sustainment costs efficient. Photo by Jeff Flamer courtesy of Lockheed Martin

The United Kingdom is looking for ways to drive down the cost of operating and sustaining its F-35 Joint Strike Fighter fleet now that the program is transitioning from its initial development phase to significant production quantities, a U.K. defense official said Tuesday.

“We must maintain an absolutely laser-like focus on keeping those costs down,” said Stephen Lovegrove, who, as the permanent secretary of the U.K. defense ministry, is roughly the British counterpart to U.S. Deputy Defense Secretary Pat Shanahan. “Historically … we’ve been okay at buying stuff, but we’ve not been necessarily good at sustaining and operating it as cost-effectively as we possibly can. We need to work very, very, very hard on that, and we are doing so.”

Lovegrove was scheduled to meet later in the day with Shanahan and F-35 program officials to discuss operation and sustainment costs.

Such costs are “slightly unknown territory at the moment” because the Lockheed Martin-built plane is still new and will be flown for decades, Lovegrove told a Defense Writers Group breakfast. Some members of the British parliament have expressed frustration that he cannot yet provide precise cost figures.

According to the U.S. Government Accountability Office, F-35 sustainment for the U.S. Air Force, Marine Corps and Navy is expected to cost $1.12 trillion over 60 years. A Pentagon official indicated in October that the Defense Department was launching a year-long “deep dive” to look for ways to cut the cost of the jet’s production and sustainment.

Despite the U.K.’s cost concerns, Britain is “very pleased” with the aircraft’s development, and the program has stayed “well within budgets” so far, Lovegrove said.

“It’s doing everything that we hoped it would do, and we are pleased to see the cost of acquisition coming down in line with the way that we assumed it would,” he told reporters.

The U.K., the largest foreign buyer of the F-35, plans to procure 138 planes for the Royal Navy and Royal Air Force. The U.K. has placed 48 of those jets under contract and has taken delivery of 15.

Also at the breakfast, Lovegrove said that development of the common missile compartment (CMC) for new U.K. and U.S. ballistic missile submarines is “going very well.” General Dynamics Electric Boat is the prime contractor for the CMC, which will be installed on the U.S. Navy’s Columbia class and the Royal Navy’s Dreadnought class.

Turning to space, Royal Marine Gen. Gordon Messenger, the U.K.’s vice chief of the defense staff, said Britain shares U.S. concerns about growing threats to satellites and is looking for ways to increase the resiliency of its current and future spacecraft.

“That is an area that’s getting more and more focus,” Messenger told the Defense Writers Group. “We’re working closely with U.S. colleagues on that.”

One possible step would be to improve the ability of satellites to defend themselves. Another would be to work with allies to build redundancy into satellite networks to avoid dependency on a single spacecraft. 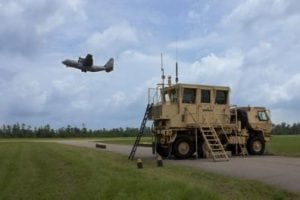