Bombardier expects its CS300 to play an important role in the company's 2018 fortunes. (File photo)

Bombardier has released its fourth quarter and full year 2017 results. The results across 2017 weren’t great in terms of revenue, but the company indicated that it has a lot to be excited about based on the way the year ended and its prospects for 2018.

The Canadian aerospace manufacturer, in what CEO Alain Bellemare called the second year of a five-year turnaround plan, saw full-year revenues decline across the board by 1% year-over-year, but did have a stronger fourth quarter than in 2016.

The company pointed to guidance numbers, which it exceeded across all business segments, and $672 million in earnings before tax and interest, up 57% year-over-year as reasons for optimism.

In the business aircraft segment, Bombardier delivered 140 aircraft and brought in a total revenue of $5 billion, down 14% and 18%, respectively, from 2016. The manufacturer noted that the fourth quarter saw the most orders placed in 2017 and was the strongest fourth quarter in the past three years. It also expressed confidence in the future of the Global 7000.

Bombardier delivered 73 commercial aircraft, 13 fewer than in 2016 and saw a 9% decrease in commercial revenues ($235 million). It said that deliveries were hampered by delays in receipt of the Pratt & Whitney engines that power its C series aircraft.

However, in December it delivered the first two CS300 aircraft to Korean Air and signed an agreement to sell 12 to 24 CS300s to EgyptAir.

In light of those customers, the pending Airbus partnership on the C series and the U.S. International Trade Commission’s ruling against Boeing in its request for tariffs on Bombardier vis-à-vis sales to Delta Air Lines, the company said it expects the aircraft to be a big part of its 2018. 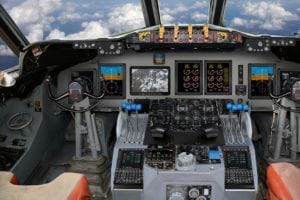