FAA records show that more than 80,000 individual unmanned aircraft systems (UAS) have been registered for commercial and government operations since August 2016. With some companies flying fleets of drones, operations software becomes increasingly beneficial. That’s where Skyward, and its co-president, Jonathan Evans, come into play.

Skyward, acquired by Verizon in February, provides commercial UAS operators with planning, tracking, logging and regulatory compliance tools, among items. That means Evans and his team have to be ahead of the curve on the latest technological and regulatory developments. Evans is sometimes directly involved. He’ll be sharing his insights and answering questions this week at Rotor & Wing International’s Rotorcraft Business and Technology Summit in Fort Worth, Texas. Find out a little bit more about Evans, and what questions he might be able to answer for you.

What is your background?

I started flying in 1997 when I enlisted in the U.S. Army. I got my private pilot’s license, became a warrant officer and was accepted into the Army’s Rotary Wing Flight School. I graduated from flight school when I was 21, and my first assignment was in the 236th Medical Company in Landstuhl, Germany.

After six years in the Army, I flew for Southwest Medevac in New Mexico and Evergreen Helicopters in Alaska, before becoming a Life Flight Network pilot in Eugene, Oregon. It was there that I enrolled in the MBA program at the University of Oregon, under the GI Bill. I became a grad student by day and a Life Flight pilot by night — and along the way, I became interested in what a business could accomplish with a fleet of networked drones.

That’s where Skyward came from — it was completely informed by sitting in the cockpit.

Today, five other professional pilots have joined the Skyward team. We’re proudly shepherding forward the institution of aviation, and we hope to carry forward the tried-and-true gold standards of aviation into a new level of sophistication, capability, efficiency and safety.

What do you think is the biggest hurdle, technologically or otherwise, that is keeping the commercial UAS market from exploding?

Today, I think we’re living in a drone market that looks a lot like that first wave of the internet on 14.4k modems. Amazon and others established early e-commerce shops, and you could see a burgeoning possibility, a very clear potential for the market to follow; but there was a technological threshold that had to be reached — and that was broadband.

That’s about where we are with the airspace. Today we have these really magnificent tools in drones, where you can buy a thousand-dollar aerial robot and fly it up legally to 400 feet over your head. But in most countries in the world right now, drones are limited by regulations that require a pilot to operate just one drone, within visual line of site. It’s a wonderful thing for doing cell-phone-tower inspections and getting that just-in-time news media shot in 4K, but at the same time it’s limiting the possibilities.

The biggest hurdle in the commercial UAS market is that the FAA and other regulators of the world ultimately need to trust a new system of aviation — one that doesn’t rely on operators visually seeing one another. In order to go beyond line of sight, we have to show regulators that the same level of safety is provided for drone operations as in manned aviation — that drones can avoid other aircraft to the same degree that a helicopter pilot can with a Robinson R44.

I’m privileged to lead at the Global UTM Association (GUTMA), which is an international trade organization that is creating technical standards for the drone industry to implement. Our goal is to create a truly equitable airspace, so industry can innovate with drone technology, while maintaining the safety of other aircraft, and people and infrastructure on the ground.That’s what Skyward and others in the industry are working with the FAA and other regulators all over the world to accomplish.

Once regulators are able to establish those standards, then we’ll start managing these robots as networks in the airspace. To return to the internet analogy, that will be our broadband moment.

If you had to pick a couple of specifics, what aspects of the drone world should aviation professionals keep an eye on the most?

If you want to get into the drone world right now, you’ll need to get certified. In the U.S., that means getting a Part 107 remote pilot certificate with a small UAS rating. You can do it over a weekend quite easily through the FAA website, and you’re going to learn important things about what it takes to safely operate a drone under Part 107 of the FAA regulations. Plus, getting another rating on your ticket is just fun!

Getting certified makes available to you these early entrepreneurial opportunities in adding value using drones. Skyward has customers in 41 countries, and we see Fortune 500 companies hiring drone pilots to do cell phone tower inspections, facilities management, roof inspections, inventory management in warehouses and large industrial yards. We see certified pilots getting picked up to do media shots of all kinds — drones are being used in more and more production houses. And that’s just the beginning.

There’s a lot of work to be had on this new frontier of aviation, and pioneering aviators are getting their UAS certifications.

What’s next for Skyward? Are there any projects in the works?

For Skyward, it’s still the early days. We were recently acquired by Verizon, and we’ve been really working our new integration with them. We’re really fortunate to be on the forward edge of this technology. Even though we’re part of this large organization, we’re going to continue to focus on what’s important to Skyward—helping mobile enterprises manage their drone operations for a safer, more productive, and compliant business.

I think that there’s a great renaissance in aviation happening here today. Whether you see drones as cell phones taking flight, or you see aviation becoming digital, robotic, and programmatic, there is a confluence of technologies here that I am thrilled to be a part of.

It’s really an honor and a privilege to get to lead that effort, both as an aviator and as a technologist.

This article was originally published by Avionics sister publication Rotor & Wing International. It has been edited. 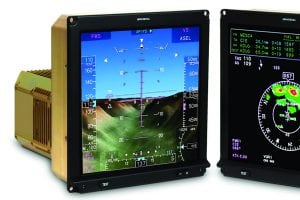