General Atomics Aeronautical Systems is bringing its Predator B unmanned aircraft system (UAS), known as the MQ-9 Reaper to the U.S. Air Force, to the civilian market as the MQ-9B SkyGuardian. Needing a ground control station to go with it, General Atomics has signed up for Pro Line fusion, Rockwell Collins said at the Paris Air Show.

While originally intended for manned aviation cockpits, Rockwell Collins' Pro Line Fusion has already proven itself as a commercial UAS ground control station. The company completed a round of beyond-line-of-sight testing with the FAA and BNSF Railway, in what Rockwell Collins called the “first true beyond-line-of-sight commercial UAS flights in the continental U.S.”

“This is the same thing that you would find in a business jet. It has all the certification requirements for that controlled airspace access,” said Kevin McElroy, who works in drone business development for Rockwell Collins. Avionics spoke with him in early May. “So this is forward-looking to when that type of airspace gets opened up. There's actually a large UAS manufacturer, that is very forward-leaning, that has already purchased this. We're currently integrating it into their ground station for that airspace access proposition.”

“Our Pro Line Fusion avionics bring a proven, civil-certified pedigree from manned aviation to unmanned systems. The flexibility of the system enables its application for UAS,” said Dave Schreck, VP and general manager of airborne solutions for government systems at Rockwell Collins. “This program with [General Atomics] will help pave the way and set the standards for UAS platforms accessing controlled civil airspace.”

According to Rockwell Collins, General Atomics says the Sky Guardian is the first drone of its kind that is designed to be compliant with international airworthiness standards. 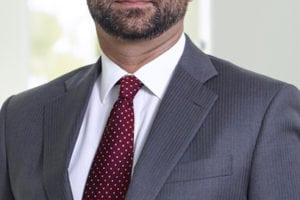