Founded in 2006, XOJET has a North American-based fleet of 300 Cessna Citation X and Bombardier Challenger 300 business jets. Over the last decade, XOJET has grown to become one of the private aviation industry’s most unique companies, with an on-demand operational style and an innovative digital platform. Coming off a year that saw the formation of several innovative partnerships, Avionics recently caught up with XOJET Chief Pilot Chris Crocker to discuss some of the communications, navigation and surveillance (CNS) technologies in use across its operations.

In 2016, the San Francisco-based business aviation operator invested in a multi-million dollar fleet upgrade program and became an official partner of Etihad Airways and JetSmarter, the Uber of private aviation. Crocker first began with XOJET as a captain in 2007, before becoming the company’s chief pilot in February 2015.

1. Avionics: Can you provide a general overview of the type of aircraft that you primarily fly as well as some of the newer avionics technology you’re using?

Crocker: XOJET currently operates both the Challenger 300 and the Citation X, all of which are equipped with onboard high-speed Wi-Fi. The Bombardier Challenger 300 has some of the most advanced avionics on the market with the Collins Pro Line 21 package. It boasts a large cabin, true coast-to-coast North American range, short airfield takeoff-and-landing advantages, exceptional performance (even under hot and high-altitude conditions) and a Mach 0.82 high-speed cruise. The Cessna Citation X employs the Honeywell Primus 2000 avionics package. With a top speed of Mach 0.92 (700 mph), the Citation X is one of the fastest commercial aircraft available on the market. Powered by massive Rolls-Royce engines originally designed for commercial airliners, the Citation X covers one mile every six seconds, shrinking a Los-Angeles-to-New-York flight to just four hours — an hour faster than conventional business jets.

2. Avionics: Pilot usage of tablets in the cockpit has grown rapidly since the introduction of Apple’s iPad in 2010, and the FAA recently determined it would permit depiction of an aircraft’s location on an EFB during all phases of flight. What type of EFB technology do XOJet pilots use?

Crocker: All XOJET pilots are issued Apple iPad Minis with retina displays. With our onboard Wi-Fi, the available applications and possibilities are seemingly endless.

3. Avionics: When flying in low-visibility conditions due to weather or other factors, are there any specific technologies that are particularly helpful in avoiding turbulence, as well as during the approach and landing phase of the flight?

Crocker: All XOJET pilots use iPad minis with the retina display for en route and approach charts, as well as a host of other applications that use our onboard high speed Wi-Fi to provide near real-time data on weather, including Nexrad radar and turbulence forecasting models. Apps such as MyRadar Pro are invaluable in that we can overlay our flight plan and select a slew of graphical weather information while en route — something unheard of until just five years ago.

4. Avionics: The FAA recently released its 15-year Performance Based Navigation (PBN) strategy to increase the deployment of PBN procedures at commercial and general aviation airports throughout the U.S. National Airspace System. Do you use PBN procedures such as RNAV, RNP or LP, or LPV? What types of benefits do these procedures provide from a pilot perspective?

Crocker: Currently we conduct RNAV approaches consisting of LNAV and LNAV/VNAV approaches. The benefits are numerous. For example, we can now get into airports that, until recently, did not have any instrument approaches.

5. Are you using any vision-enhancing technologies, such as synthetic vision or enhanced vision systems? If not, do you see any potential benefits coming from this type of technology?

Crocker: While we don't currently use synthetic or enhanced vision systems, we absolutely see benefits to the increased situational awareness such systems provide. We hope to add this to our fleet at some point. 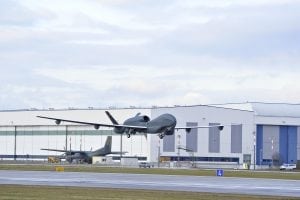