[Avionics Magazine 12-29-2016] Raytheon engineers are currently working on a research and development project that aims to provide commercial and military pilots with a cyber attack warning system within the next year. The aerospace and defense manufacturer says two products are in development: a software-only technology and a hardware-deployable module. The software will provide a quick and easy fix should the need arise, while the hardware is designed to give operators a hard-wired solution capable of protecting critical aircraft systems from cyber attacks. Photo: Raytheon.
The company released some details about the project and the products it will develop in a December 2016 blog post on its website.
“Think of it as the cyber equivalent of a missile warning system," said Mike Worden, a Raytheon engineering fellow. "When an enemy missile locks onto an aircraft, the pilot gets alerted so he or she can take evasive action, popping off flares and chaff to avoid getting shot down. With a cyber warning system, pilots will also be able to tell if anything on the aircraft has been hacked and performing actions that it shouldn’t."
According to Greg Ladd, also a Raytheon engineering fellow, the team is developing software that looks for anomalies on aircraft data buses, remote terminals and any device that could be connected to the buses such as annunciators, flaps, lights and landing gear.

Worden says airplane cyber attacks are more likely to occur with an attacker looking to simulate aircraft malfunctions so that a pilot loses trust in the functionality of their airplane. The Raytheon engineering fellow has assembled a team of cyber experts and engineers to develop the technology. 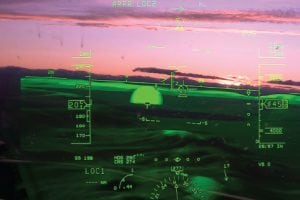