Photo: ICAO.
Overall, CORSIA will increasingly require international airspace users and others to measure, verify and report their Green House Gas (GHG) emissions to ICAO. Depending on the country they are based in, and how that country’s status fits into the agreement, home operators will begin to participate voluntarily in the carbon offsetting and reduction scheme for international aviation (CORSIA). ICAO has not yet clarified many of the technical and procedural details.
The agreement is structured into three primary phases. The first is a pilot phase that will run from 2021 to 2023, serving as a voluntary phase in which 65 states — including all of the European Union, China and the United States — have already agreed to participate. ICAO will then conduct a 2022 review on the implementation of the CORSIA to determine if there will need to be any adjustments before the initiative moves forward, according to the Air Traffic Action Group (ATAG). The first implementation phase will then run from 2024 to 2026, which will also be voluntary, and 2027 to 2035 will serve as the second phase, which has triennial technical adjustments to the distribution of obligations between individual airlines, moving from a collective approach to more of an individual approach, according to ATAG.
Frederik Dahlmann, assistant professor of global energy at the U.K.-based University of Warwick's Warwick Business School, says the main goal of CORSIA is to allow operators to offset unavoidable aircraft emission growth with reduction activities elsewhere.
"Broadly, carbon offsetting works by first measuring, verifying and reporting a company’s corporate carbon footprint and then by purchasing ‘carbon offset credits’ for any emissions the company cannot actively reduce by itself. These credits are financial instruments and come from investments in projects around the world in renewable energies such as wind and solar energy, but also in commercial and industrial projects which intentionally reduce their existing emissions. To offset its emissions, the company buys an equivalent volume of carbon offset credits to cover its own emissions," Dahlmann told Avionics Magazine.
Also key to CORSIA is that airspace users don't actually have to make the investment in projects that remove the equivalent volume of GHG emissions from the atmosphere or prevent the emissions from taking place. Rather, this agreement allows operators to buy carbon credits and outsource the process of reducing emissions to organizations whose sole purpose is to do so.
"The price of these carbon credits is likely to vary somewhat by region and type, but one would expect increasing convergence over time, particularly if one global market is established. Initially, however, carbon offsets will be accounted for as costs to the business which it can then decide whether to pass on to customers or to internalize," said Dahlmann.
Most major international aviation operators have already been preparing for the concept of CORSIA for quite a while. American Airlines, for example, in its annual report filed with the Securities and Exchange Commission (SEC) in February, specifically highlighted the potential financial impact of international emissions reduction regulations on its operations to shareholders. The annual report refers to previous efforts made by the European Union to establish the Emissions Trading Scheme (ETS) in 2008, under which each EU member state is required to extend the ETS to aviation operations. That directive would have required international operators flying in EU airspace to annually submit emission allowances in order to operate flight to and from airports in EU airspace. ETS was suspended however in its application to international operators in April 2013 and applied to intra-EU flights only.
"Beyond 2016, compliance with the ETS or similar emissions-related requirements could significantly increase our operating costs…Regulatory efforts, both internationally and in the U.S. at the federal and state levels, are still developing, and we cannot yet determine what the final regulatory programs or their impact will be in the U.S., the EU or in other areas in which we do business. However, such climate-change-related regulatory activity in the future may adversely affect our business and financial results by requiring us to reduce our emissions, purchase allowances or otherwise pay for our emissions. Such activity may also impact us indirectly by increasing our operating costs, including fuel costs," American Airlines said in its annual report.
Going forward CORSIA will require airlines such as American and others to consider the long-term GHG emissions trajectory envisioned by the new agreement, says Dahlmann.

"Equally important in the context of offsetting is that carbon credits are high quality. This means that the credits need to comply with a set of high standards in terms of being additional, real, and permanent, and avoid double counting, inconsistent timescale and leakage," said Dahlmann. "Some of these issues are outside the aviation companies’ control, but depending on how CORSIA is developed, they need to be mindful that potentially buying poor quality credits is likely to result in reputational backlash for the firm and industry." 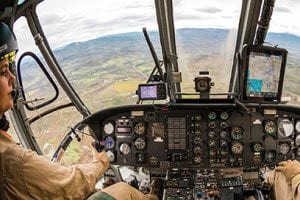 NextGen and Helicopters: Where are the Benefits?