[Avionics Magazine 09-06-2016] Four of the world's largest civil aviation authorities — Agencia Nacional de Aviacao Civil of Brazil (ANAC), European Aviation Safety Agency (EASA), Transport Canada Civil Aviation (TCCA), and the Federal Aviation Administration (FAA) — are moving to streamline the certification and regulatory processes among their agencies. Additionally, the EASA and FAA, each of which handle the bulk of the world's certification and validation projects for aircraft components and systems, have published a joint Validation Improvement Roadmap (VIR) to recognize each other’s certificates and approvals. The roadmap also aims to ensure a risk-based level of involvement rather than comprehensive, redundant review for approving new parts and technologies on airframes. Cockpit avionics on the King Air 350ER. Photo: Textron Aviation.
All four authorities, ANAC, EASA, FAA and TCCA, are part of the Certification Management Team (CMT), established through a charter signed by the four agencies in September 2015 to manage technical, policy, and bilateral agreement certification, manufacturing, export and continued airworthiness issues. All four authorities have bilateral airworthiness agreements independently, and are using the CMT to improve the acceptance of certificating authority approvals, meaning when a product gets certified in one country, such as by the FAA in the United States for example, it will not be subject to the same redundant engineering and certification tests in other CMT countries.
"Most of the aircraft produced in the world are either produced in the United States, Europe, Canada or Brazil. These aircraft are exported globally, those four authorities cooperate under this CMT team, that’s their form of cooperating and committing to how they improve their relationships and how they advance and promote more efficient ways of working together," Walter Desrosier, vice president of engineering and maintenance at the General Aviation Manufacturers Association (GAMA), told Avionics Magazine.
Last week, the FAA released the new CMT strategy framework, which states that CMT is looking to promote collaboration at "the lowest possible level." Also, the authorities have committed to implementing risk-based validation principles and taking immediate steps to eliminate technical involvement. Implementation of this strategy will "reduce certification authority resource expenditure, ensure a high degree of safety, and promote regulatory cooperation and harmonization between the CMT partners," the CMT framework states.
The new VIR established by the FAA and EASA individually, separate from the new CMT framework, is significant as well as it states a clear objective of reducing validation effort, time and costs to a level of 20 percent compared to the first Technical Implementation Procedures (TIP) agreement that occurred between the two agencies in 2011, by 2022. According to the timeline for milestones established in the VIR, by December 2016, the FAA and EASA want to refine their criteria for Level 1 major changes associated with aircraft components and systems.
Also by December 2016, the two authorities want to harmonize operational validation requirements establishing a process where an approval by one authority validates approval by another. EASA and the FAA also want to enhance the harmonization of technical standards and policies so that certification basis of the certifying authority is acceptable to the validating authority with no additional technical conditions. This roadmap will only apply to products originally being certified either in the U.S. and Europe, and destined for export to customers operating in these two airspace systems.
Desrosier said the greatest benefit resulting from this newly released VIR and CMT framework for avionics manufacturers is improving the time to market for new products and technologies.
"If you’re a U.S. manufacturer getting your approvals and certifications under FAA with an FAA product, this agreement is going to be driving EASA to start to accept all those products without another technical review, without having to do another redundant technical analysis,” said Desrosier.
The agreement can lead to a significant savings in efficiency both in time to market, for avionics manufacturers to get their products to customers in Europe for export, and also in cost. The amount of cost involved in running a certification validation program with EASA to validate a product, in the engineering resources applied to it, and the potential for design changes — these are all significant costs that, according to Desrosier, are all avoided by EASA and the FAA further accepting approvals that have already been done by the certifying authority.

That’s not only the certification and approval of the avionics box at the Technical Standard Order (TSO) level, the authorities are also discussing Supplemental Type Certificates (STCs). That would provide even more benefit as it gets to the ability for STCs to install avionics being more readily and easily accepted by EASA and FAA, according to Desrosier. 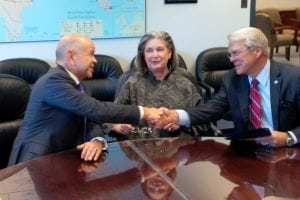