[Avionics Magazine 06-30-2016] Inmarsat has announced a major new win for its Swiftbroadband-Safety (SB-S) service. Airbus has selected SwiftBroadband-Safety as a cockpit communications technology for its A320 and A330 aircraft families. Airbus A320 cockpit. Photo: Airbus.
Swiftbroadband-Safety is Inmarsat's next generation Internet Protocol-based (IP) safety communications system developed specifically for aircraft cockpit data and voice communications. Under the agreement with Airbus, SB-S will bring a prioritized IP channel — a connection that provides additional availability for IP data throughput — to the A320 and A330 family cockpits. Some of the prioritized IP channel applications that will be enabled through SB-S will include Electronic Flight Bag (EFB) uploads and downloads, meteorological and environmental information, and real time downloads of aircraft performance data, such as engine data.
Inmarsat's SB-S service will be enabled on the A320 and A330 aircraft families by hardware supplied by Cobham, with its Aviator 200S and 700S series. The Aviator S is a Compact Satellite Data Unit (C-SDU) designed to allow secure cockpit data communication with aircraft domain segregation architecture developed to the ARINC 781 Attachment 8 standard. Its capabilities are a game changer for the commercial aviation industry because it effectively takes Aircraft Communications and Addressing Reporting System (ACARS) messages, encapsulates them into an IP message and then strips the message out on the ground before feeding it into the ACARS data network that SITA and Rockwell Collins Information Management Service (formerly ARINC) provide on a subscription basis for airlines.
The aviation industry has already been observing the operational use of SwiftBroadband Safety on Hawaiian Airlines' fleet of Boeing 767-300s, where the island carrier has been using SB-S for FANS 1/A communications, and eventually plans to use if for its EFBs. But this new agreement with Airbus is a major win for Inmarsat, because it will initially establish the Aviator S hardware and SB-S service as line fit options for A320 and A330 family aircraft beginning in 2018. Airbus has effectively provided a stamp of approval for the use of Internet Protocol to provide critical digital communications capabilities for airlines. Plans for a retrofit option have not been discussed, however considering L2 already achieved an STC to add the technology to Hawaiian's Boeing 767 fleet, an example for retrofitting aircraft with SB-S has already been established. With Airbus projecting 70 percent of a forecasted global market demand for 32,000 new aircraft deliveries between 2015 and 2034 to be single aisle aircraft types like the A320 and Boeing 737, this will be a major win for Inmarsat and Cobham going forward.
Mary McMillan, vice president of safety and operational services for Inmarsat, told Avionics Magazine that SB-S represents a modernization of the Classic Aero service that it has provided to airlines and business jet operators for more than 20 years. The Classic Aero network supports analog phone, fax and cockpit data communication previously on Inmarsat's I-3 constellation and now on the I-4 constellation.
"We have created the SwiftBroadBand Safety service channel so that we can provide the same services that we have performed for the last 25 years using Classic Aero, which are primarily run off of our I-3 satellites, our third generation satellites. In the meantime we’re establishing the new SwiftbroadBand Safety digital platform using these new terminals that are specifically designed for cockpit aviation, so they will enable all of the current services, but also create additional ones. So you're basically future proofing yourself for the additional services that are in development as a result of introducing a digital broadband channel to the cockpit," said McMillan.
Furthermore, she compares the impact SwiftBroadband will have on cockpit communications to the impact that the iPhone has had on the mobile phone industry.

“The way I like to describe it is Classic Aero resembles your sturdy rotary dial telephone, and enables telephone calls and transmission of data, but now we’re replacing that with an iPhone. We’re replacing it with a small compact very powerful platform that not only is going to carry the traffic that it carried before and be able to deliver it to the places that it needs to go, but also there’s a whole world of capability that it will also enable. That’s the big change,” said McMillan. 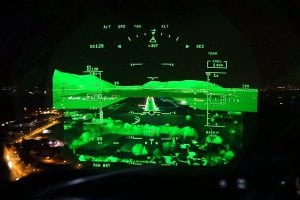