[Avionics Today 06-13-2016] Improving cybersecurity for air traffic control and aircraft systems, funding air traffic modernization, and embracing bold new ideas are all points that commercial aviation needs, according to Michael Delaney, vice president and general manager for airplane development at Boeing. During his opening address at the American Institute of Aeronautics and Astronautics (AIAA) Aviation 2016 conference on June 13, Delaney answered some of the toughest questions facing commercial aviation today. These topics included: a possible replacement for the 757; stable funding for air traffic modernization initiatives; and a look at whether or not supersonic commercial air travel will become a reality. Delaney expressed concern on the issue of cybersecurity several times, both in his opening speech and during a Q-and-A session with retired Boeing CEO Jim Albaugh.
"One of the things that I worry about the most are the cyber threats to the airplane and to the system. And I think one of the things that you see from some of the discussion from the media, is you have to worry about the direct attack and the indirect attack through the back shops of the airlines and the aerospace systems. We have to ensure that the airplane, the design data, the maintenance data … the software on the airplane, is secure and can’t be tampered with. Or it has to get to the next level of artificial intelligence where it can defend itself against any threat," said Delaney.
Aircraft cybersecurity has been repeatedly analyzed and discussed by many of Boeing's avionics and cabin Wi-Fi suppliers as well as third party vendors over the past year. The investigations took off especially after the Government Accountability Office (GAO) published a report on cyber risks associated with the use of Internet Protocol (IP) on commercial aircraft. Delaney did not give any specific recommendations on how to address aviation technology cyber threats, but rather advocated for more investment in countermeasures to defend aircraft and Air Traffic Control (ATC) systems from threats.

Delaney also addressed Boeing's current research around fielding a replacement for the 757, which he says is not currently economically viable.
"We build and design airplanes to serve a market, we don’t build and design an airplane and then fit it into a market. The process we’re going through right now is to try to understand the space between a 737 or an A320 family, and a 767 or a 787," said Delaney. "There is a unique market space there for people who want to fly about 4,500 to 5,000 nautical miles, [carrying] 200 to 250 people and we think it’s a ‘grow the pie’ type of scenario from a perspective of what we call our commercial market outlook. We are excited about it but, again, it’s putting a new airplane into a space, which means we have to solve recurring and non recurring problems to really make it work."
Delaney's remarks are similar to comments made by Boeing Chief Financial Officer Greg Smith in February at the Cowen and Co. investors’ meeting, in which Smith called any attempt to configure an aircraft that would address the gap between Boeing's 737 MAX 9 and 787-8 "premature." A replacement for the 757— which is about 20 percent heavier than a 737 MAX 9, and is still flying today in reconfigured variants for air freight and VIP operations — could fill that gap. But, as Delaney noted, Boeing does not feel at this point there is enough market demand for it.

Delaney also looked to the issue of modernizing the U.S. Air Traffic Control (ATC) system, otherwise known as the FAA's NextGen project. Funding for NextGen and all FAA programs dries up July 15, and aviation advocacy groups have been putting pressure on lawmakers to avoid establishing another short-term fix that would fund the agency for another year. While not directly advocating to keep the FAA in its current structure or creating an independent ATC organization as a House Transportation and Infrastructure Committee bill would, Delaney compared the situation to when he was the chief engineer on the 737 program with a fear that Boeing would be technologically leapfrogged by China.
"What I see, is that there are a lot of groups — the general aviation guys, the commercial guys — and they are sometimes not all lined up. But, at the end of the day, we have to think about air transportation and moving people and goods … and what is good for our [Gross Domestic Product] GDP. It’s an investment that allows us to grow the pie and we have to figure out a way to do it. When I was chief engineer of the 737 I was really worried that China was going to leapfrog us because they weren’t going to trains and the railroad system; they were going to go right into airplanes to the west. They were much more interested in [Required Navigation Performance] RNP navigation and some of the things that we had developed but could not get deployed in the United States. At some point we might be dragged along by someone else if we’re not leading," said Delaney.

Finally, when asked about the future possibility of commercial supersonic air travel, Delaney said that the economics around the concept, rather than the technology or design itself, is the real issue.

“I do think that the most likely place for it to happen is somebody like Gulfstream that does it in a very high-end business jet. When you run through the economics it’s going to be hard to get to a place where it closes and people can afford the tickets. It’s an economics problem it’s not a physics problem,” said Delaney. 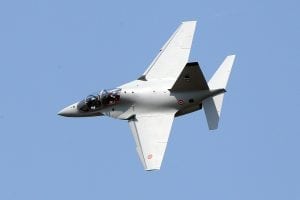