[Avionics Today 05-26-2016] The 2016 European Business Aviation Conference and Exhibition (EBACE) kicked off in Geneva, Switzerland earlier this week, highlighting the growing business aviation industry in Europe and worldwide. JetNet released its first quarter aviation market report earlier this month, which notes that business jet sales are up, showing a 6.8 increase in sales year-over-year, the largest increase in the report, which also looks at helicopters and commercial airliners.

Bombardier unveiled its own 10-year outlook for the private aviation market at EBACE, which forecasts a continuing uptick in the sector. The company predicts up to 8,300 new business jet deliveries representing approximately $250 billion in industry revenues from 2016 to 2025. The company also notes that significant growth is expected in the long term, with larger aircraft continuing to dominate the market. As growth eventually returns in emerging regions, Bombardier believes the business jet market will pick up as the popularity of private aviation continues to increase every year.

The expo came to a close Thursday, allowing a whirlwind of announcements, partnerships and new products to settle. But there’s no need to dig through the press releases and overlapping coverage, here Avionics Magazine has compiled the top avionics-related announcements from the event so you don’t have to!

On May 23 Dassault announced that its Combined Vision System (CVS), known as FalconEye is approaching certification on the Falcon 2000S and LXS twinjet aircraft. The CVS first Head-Up Display (HUD) system blends synthetic, database-driven terrain mapping and actual thermal and low-light camera images into a single view, providing increased situational awareness for flight crews in all conditions of operation, day and night.

FalconEye is due to be qualified on the Falcon 2000S and 2000LXS twin jets by mid-year and on the new Falcon 8X ultra-long range trijet in the third quarter. And Dassault says that nearly 80 percent of Falcon 8X customers have signed up for the system.

On the 8X, FalconEye will eventually be made available in both single and dual HUD configuration — another Dassault innovation that is ultimately expected to set a new industry standard. By providing the same information and views heads-up to both the flying and non-flying pilot, the Dual HUD system will improve crew coordination and will also facilitate pilot training. Falcon 8X Dual HUD approval is anticipated in late 2017.

Under the agreement, Honeywell will provide Haitec customers with a range of technologies, including IntuVue 3D Weather Radar and the SmartTraffic Traffic Collision Avoidance System (TCAS). These cockpit solutions are designed to decrease flight delays and maximize passenger comfort and safety by giving pilots better situational awareness of conditions around them. On the passenger side, Honeywell will also provide its Ovation Select Cabin Management System, which puts lighting, seat, temperature and galley controls at the fingertips of business jet travelers.

Just before the show, Garmin announced that the FAA has issued Type Inspection Authorization (TIA) for the G5000 integrated flight deck on the Beechjet 400A and Hawker 400XP aircraft. TIA initiates the formal FAA flight evaluation of the G5000 flight deck modernization program, indicating this program is in its final stages of certification.

“Achieving FAA Type Inspection Authorization is a tremendous milestone and a significant step toward certification for the G5000 in the Beechjet,” said Phil Straub, Garmin vice president managing director of aviation, in a statement. “This upgrade solves a broad range of global next generation airspace initiatives and provides owners and operators with a new, zero-time avionics suite.”

4. Rockwell Collins Makes its Mark in More than a Few Cockpits

The Dassault Falcon makes another appearance as Rockwell Collins announced (technically just before the show) that its Future Airspace Navigation System (FANS) 1/A solution for Dassault Falcon 50EX aircraft that have been upgraded with Pro Line 21 avionics is now certified as part of a Supplemental Type Certificate (STC) held by Dassault Falcon Jet. The upgrade gives Falcon 50Ex operators access to preferred wind-efficient transatlantic routes where FANS 1/A has been mandated within the North Atlantic Tracks System (NATS).

Rockwell Collins tagged on to two more announcements during the show. Beechcraft Corporation received type certifications from both the FAA and the European Aviation Safety Agency (EASA) for the new Pro Line Fusion-equipped Beechcraft King Air C90GTx turboprop. And the Cessna Citation Longitude, which is making strides toward its first flight this summer, will also feature Rockwell Collins flight controls.

While significant cockpit avionics news was aplenty during this year’s EBACE, announcements from Honeywell, ViaSat and Rockwell Collins, TrueNorth Avionics and others dominated the headlines. For more coverage, check out our article on the huge demand for connected technology at EBACE 2016.

This particular announcement from Jeppesen, which concerns how customers for Jeppesen’s avionics line can receive NavData plan extensions, gets a mention because the company put the word “avionics” in the title three times.

Three times. If that doesn’t make it relevant, I don’t know what does. 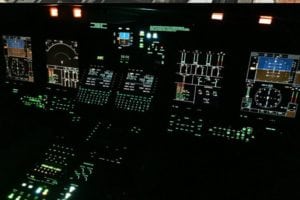