[Avionics Today 09-11-2015] A new report comparing the processes used to deliver air traffic services in the United States and four other countries shows that the proposed legislative plan to reform the Air Traffic Control (ATC) structure in the U.S. would have a major impact on the nation's ability to continue rolling out the technological initiatives of its ongoing NextGen air transportation system modernization plan. The report, completed by the Department of Transportation Office of Inspector General (DOT OIG), compared the FAA's Air Traffic Organization (ATO) to the Air Navigation Service Provider (ANSP) organizations in four countries that have separated their air traffic control functions from their safety oversight and regulatory functions: Canada, France, Germany, and the United Kingdom. The William J. Hughes Technical Center in Atlantic City, N.J. is responsible for leading the research efforts around modernizing the U.S. air transportation system. Photo: DOT.
DOT OIG's researchers completed the analysis of the U.S. against the four other countries as lawmakers prepare to decide on how to move forward with the FAA reauthorization bill. The current FAA reauthorization, enacted in 2012, will expire Sept. 30.
A major finding of the new report is that the size and complexity of the U.S. airspace, and its extensive aviation research and development activities, are unmatched by countries with separation between their civil aviation authority's safety and regulatory responsibilities and their ANSPs' air traffic management functions. Airspace under U.S. control is more than 2.5 times the size of the airspace in the U.K., the largest of the four ANSPs examined by DOT OIG. Also, the U.S. has more General Aviation (GA) aircraft flying in its airspace than all four of those countries combined, with 209,034 GA aircraft flying in U.S. airspace as compared to a combined 109,435 GA aircraft flying in Canada, Germany, France, and the U.K.
These findings point to a key impact that the legislation proposed by Bill Shuster, chairman of the committee on transportation and infrastructure, outlined in a speech surrounding his support of creating an independent ANSP in the U.S. The proposed corporation would be managed by a board of aviation system users, funded by user fees, and would prioritize the maintenance of the day-to-day functions of the ATC system, while prioritizing NextGen implementation, according to an outline of the bill released by Shuster.
DOT OIG's latest report finds that the ANSPs in the countries examined do not prioritize the type of modernization efforts that the FAA is currently rolling out with NextGen. Also, the timing of the proposal to create a new ANSP in the U.S. would occur when the FAA has been making significant progress with several important NextGen initiatives, most notably: the completion of the ground infrastructure for the Automatic Dependent Surveillance Broadcast Out (ADS-B Out) network in 2014; the switch to the En Route Automation Modernization (ERAM) system in May 2015; and the announcement in May that the Data Comm text-based ATC-cockpit communication system will be expanded to 50 airports throughout the U.S. by the end of 2016.
That would mean that after previous years of major program delays and negative DOT OIG and GAO reports, at a time when the FAA finally has the NextGen program on track, the congressional proposal to create a new ANSP would have the possibility of derailing that progress.
"The four foreign ANSPs we reviewed do not embark on large, comprehensive modernization efforts, such as NextGen transformational programs, or conduct extensive aviation research and development. Rather, they deploy new technologies incrementally and try to install technology that meets their operational needs," the report says. "For example, Nav Canada used a phased-in approach in developing and introducing a new system known as Controller/Pilot Data Link Communications (CPDLC). Also, in lieu of developing large and multi-year modernization systems and software, three of the four ANSPs modify commercial-off-the-shelf products to meet their operational needs. In addition, all four ANSPs form joint ventures and other partnerships with private companies."
Furthermore, the report highlighted risks associated with the transition period to a new ANSP organization. Researchers noted that officials in the countries examined had several issues to confront during the transition, including which functions to transfer to the new organization, the timing of the transition, and how the government would conduct safety and oversight work with the new organization.
Support and opposition for lawmakers’ proposal to create a new ANSP separate from the FAA’s safety and regulatory oversight functions has been split in recent months between two major segments of the aviation community, commercial and business aviation. During a May 2015 hearing before the Senate’s commerce committee regarding the proposed change to the FAA’s organizational structure, former Airlines for America (A4A) Chairman and former United Airlines CEO Jeff Smisek expressed support for the change, while National Business Aviation Association (NBAA) CEO Ed Bolen expressed strong opposition to the change.
In a memo to the OIG responding to the new report, FAA Director of the Office of Audit and Evaluation H. Clayton Foushee neither supported nor opposed the proposed change to FAA’s organizational structure, but rather outlined what would be required in order to do so.

“As part of the currently on-going FAA Reauthorization process, here has been much discussion of alternative models for the conduct of the FAA’s current mission by stakeholders and in Congress. Changes to the current organizational structure must ensure accountability of the NAS to the users and be mindful of the critical linkages between safety, NextGen implementation and operation, airport infrastructure, as well as other current FAA functions. Any alternative organizational model must also ensure budget stability,” said Foushee. 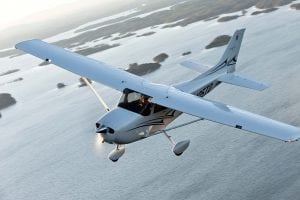