[Avionics Today 07-30-2015] Boeing and the U.S. Navy have presented the Royal Australian Air Force (RAAF) with the first EA-18G Growler, equipping the county with advanced Airborne Electronic Attack (AEA) capability. Australia is the first country other than the U.S. to obtain this aircraft.

“The Growlers will complement our existing and future air combat capability, and we will be much more lethal with this AEA protection,” said Air Marshal Geoff Brown, former chief of the RAAF. “In many respects, it’s the final piece of the jigsaw puzzle for the RAAF.”

A derivative of the F/A-18 Super Hornet, EA-18G provides tactical jamming and electronic protection. The Growlers enhance the RAAF’s current fleet, which includes 24 Super Hornets, and advance an initiative to transform the RAAF into an integrated, networked force able to deliver air power in all operating environments, called Plan Jericho.

The Growler will fly to Naval Air Station China Lake, Calif., for flight testing and then Naval Air Station Whidbey Island, Wash., where RAAF operators will continue training with U.S. Navy pilots to gain expertise in the highly technical electronic warfare mission. The RAAF is expected to take delivery of the aircraft in-country in 2017. 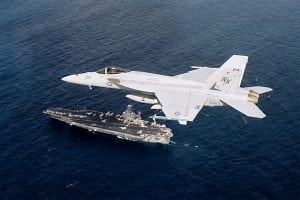