[Avionics Today 10-28-2014] The U.S. Department of Defense (DOD) and Lockheed Martin have reached an agreement in principle for the production of 43 F-35 Lightning II aircraft. Officials anticipate the Low-Rate Initial Production lot 8 (LRIP 8) contract to be finalized in the coming weeks.

The contract is for fiscal year 2014 with deliveries beginning in 2016. According to a statement released by Lockheed Martin, the average unit price for all three variants of the airframe is roughly 3.6 percent lower than the previous LRIP contract.

"Affordability is a key performance parameter in today's challenging acquisition environment," said Lockheed Martin F-35 Program General Manager Lorraine Martin. "Working together with our suppliers, we are making steady progress in reducing F-35 costs. While there will always be room for improvement, the results of the LRIP 8 negotiations and initiatives like the Blueprint for Affordability are indicative of our shared commitment to ensuring affordability." 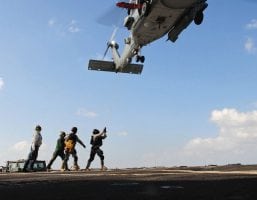