[Avionics Today 10-16-2014] Deployment of the Next Generation Air Transportation System (NextGen) has been the chief focus for the FAA in recent years. A new management structure was set in place a year ago with Michael Whitaker as deputy administrator for the FAA and Edward Bolton as the new associate administrator for the NextGen program. With this new structure, the agency turned to MITRE to take stock of the program’s progress with the hopes of getting it back on track.

Earlier this month, the Center for Advanced Aviation System Development at MITRE published a report detailing progress with the program and where the NextGen effort is headed. The non-profit organization also offers suggestions as to how to mitigate problems that may inhibit the program from advancing on schedule in terms of capabilities, infrastructure and technology. The report was set up against the FAA’s NextGen Mid-term Concept of Operations and the NextGen Implementation Plan put in place in 2009 and published in 2011. It also considered what programs could reasonably be put in place by 2020 — the deadline for the ADS-B Out equipage mandate.

“One thing we wanted to take into account is that the environment around the NextGen landscape has changed since they first documented their Midterm Concept of Operations between 2008 and 2009,” said Lillian Ryals, director, senior vice president and general manager of the Center for Advanced Aviation System Development at MITRE in an interview with Avionics Magazine. “The FAA has understood that there have been mixed viewpoints from industry and oversight organizations about how far NextGen had come along. Our intent was not to do an audit of the past but to help them assess based on where they are today, what are the things they need to focus on and what can be accomplished both from the FAA and from the stakeholder community — the industry and users of the airspace system.”

Ryals is adamant that, while it is the FAA’s job to facilitate programs and opportunities for conversation with the aviation community regarding NextGen implementation, the community has to participate and outline what it needs from the agency to achieve the goals of the program.

“This was not an assessment of FAA; this was an assessment of what it would take to achieve the capabilities and reap the benefits of the system that requires investment and agreement by the FAA and the broad aviation stakeholder community,” Ryals stated.

This is particularly true in the area of user adoption, which both the FAA and MITRE acknowledge as one of the program’s most critical issues. Ryals believes a myriad of gaps in the program, technology and communication are hindering operators and airlines from equipping their aircraft sufficiently, particularly for the ADS-B Out 2020 mandate. Monetary issues are by-and-large some of the hardest barriers that the industry is coming up against.

“It is significantly more costly to upgrade legacy aircraft avionics than it is to invest in forward fit for aircraft that are coming off the line,” Ryals said, acknowledging these monetary restraints. “It costs to change their procedures, train pilots, change airline operation centers and operation capabilities, exchange new information for FAA capabilities.”

By working more closely with the community to identify the business case and the advantages in equipping with NextGen avionics to take advantage of the benefits provided by the Air Traffic Management (ATM) infrastructure improvements from the program, the FAA may be able to make investment more attractive for operators.

“The stakeholders readily agree that each one of the users of the system has to develop their own business case to invest in new technologies, new capabilities and new services. And each airline in particular, or different class of user like general aviation or military, has a different business case based on the type of fleet they fly, where they fly and what really generates their return on investment,” Ryals said. “There are a lot of competing priorities and business interests.”

The FAA responded to this assessment in a press release last week, putting in place a call to action day-long summit later this month which aims to address legitimate concerns of the operators and manufacturers on the timing, availability, and ability to get the necessary avionics installed by the 2020 ADS-B Out equipage mandate. By better working alongside operators and laying out the consequences of non-equipage, the FAA hopes it can convince operators to get onboard with the program before they have to shut non-equipped aircraft out of airspace.

There are money issues on both ends, however. While MITRE’s assessment avoided addressing impending budget issues for NextGen, at the NextGen Institute’s Annual Public Meeting last month, Bolton noted that the agency was lacking nearly $2 billion in funds to complete the program.

But better relations aren’t a panacea for the program. A lack of technical maturity is also plaguing the plan.

“ADS-B Out certainly is technically mature. But the technical maturity can also be about the user’s understanding of exactly what benefits they’re going to get from adopting and equipping with the capability,” Ryals said.

The FAA has released a statement addressing most of the major points of the assessment, indicating that its plans are currently in line with 22 of MITRE’s recommendations. The larger theme seems to be, however, that the FAA is going to have to accept tradeoffs, choosing ways in which the agency can create a more sustainable and affordable national airspace structure without infinite funds. All parties acknowledge this is difficult in the realm of a shifting landscape.

“We can’t expect things to stay stagnant,” Ryals said. “The environment has changed over the last number of years and you always have to expect that something will change. To combat this the FAA and stakeholders have to increase their level of collaboration, how they collaborate and how they resolve issues.” 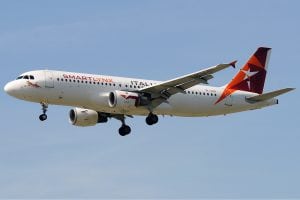 Latvian Airline Goes Paperless in the Cockpit with Jeppesen EFB