[Avionics Today 10-14-2014] The Barcelona Airport is ready for new satellite-based helicopter flight procedures, after a series of flight trials funded by the Single European Sky ATM Research Committee Joint Undertaking (SESAR JU) were recently completed. The new procedures, known as Simultaneous Non-Interfering (SNI) operations, will expand airspace capacity at the airport and allow helicopters to take passengers to and from the airport to city and business destinations, according to a SESAR JU statement.

The SNI trials are part of the Navigation SESAR Concepts Involving Operators (NASCIO), which is looking to demonstrate new navigation specifications in eight different scenarios using rotorcraft and fixed wing aircraft. SNI procedures use satellite guidance technology to manage helicopters flying low-level corridors, perpendicular to the direction of the duty runway down to a given point in space close to the airport followed by a final visual landing.

Among the avionics included to perform the flight trials were the TSO 145/146 Global Navigation Satellite System (GNSS) onboard receivers. There were a total of six approaches performed during the flight trials, using Airbus AS-355 helicopters, performing Area Navigation (RNAV 150) procedures.

“Satellite-based navigation is a key enabler for allowing SNI operations at airports. There is no other technology that can provide such great level of flexibility in the design of the trajectories,” Marc Torres, air navigation consultant for Pildo Labs told Avionics Magazine. “The flexibility that GNSS [Global Navigation Satellite System] offers in the design is vital for avoiding interference between helicopter and fixed-wing aircraft in the instrument part of flight.”

Post Air Traffic Controller (ATC) reports collected by Pildo following the flight trials showed the controllers did not believe the proposed procedures would interfere with fixed wing aircraft operations at the airport and that the workload was about the same as a normal operational day for the controllers.

“SNI concept of operations derivate from the “independent parallel approaches” mode of operation. ILS/MLS is required for such operations, and therefore vertically guided approaches are required also for the helicopter approach,” said Torres.

For now, the SNI procedures are only being developed within the framework of NASCIO for Barcelona. As air traffic at busy European airports continues to follow growth patterns projected by the International Air Transportation Association (IATA), SESAR JU could consider introducing the procedures at other airports throughout Europe. 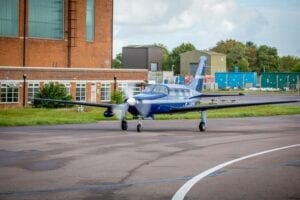