[Avionics Today 09-2425-2014] “The skies of 2025 are going to be radically different than today’s,” Marion Blakey, president and CEO of the Aerospace Industries Association (AIA) said in her opening remarks for a panel at the NextGen Institute’s annual public meeting last week. The “’Next’ NextGen — Investing for the Future” panel covered much of the emerging aviation technology trends that speakers Pete Bunce, president and CEO of General Aviation Manufacturers Association; Jaiwon Shin, associate administrator of Aeronautics Research Mission Directorate at NASA; Lillian Ryals, director, senior vice president and general manager of the Center for Advanced Aviation System Development at MITRE; and Nancy Graham, director of the Air Navigation Bureau at the ICAO, believed would take off in the next 10 years and how it would radically affect global air traffic.

The connected aircraft, System Wide Information Management (SWIM), among other topics were discussed, but the issue that hit the hardest was technology surrounding automation and what Blakey described as technologies “that seemed to be putting the pilot further and further away from the aircraft.”

At the forefront of the discussion was the ever-advancing human-machine interface. “As we continue to move more and more toward action implementation by automation, we reach a tipping point about how much the human can possibly understand what the automation is doing behind the scenes. And if there is a system failure, how can the human dive in and be the backup to failure mode. We’ve found that automation has to be the backup for the human and not the other way around,” Ryals said, noting that MITRE is researching future systems that ensure the human understands what the automation is and is not doing. Ryals believes this type of human-centric human-machine interface will prevent pilots from over-trusting or failing to understand the system.

While this approach might be attempting to step back from machines, large and small Unmanned Aircraft Systems (UAS) are doing just the opposite. And with program’s like Google X’s Project Wing, small, commercial UAS systems are naturally taking center stage. But with non-traditional aviation companies like Google and Amazon getting involved in the small UAS market, the issue of how to control and manage airspace at 500 feet and below is becoming imminently more complicated. While the systems may be tiny, this is no small task. But there’s no doubt that small UAS are coming, and Shin, who works with the robotics division at NASA, is working to figure out how to negotiate that airspace.

“What we have been trying to do in this area is very new to us,” Shin admitted, referencing NASA’s attempt put a new Air Traffic Control (ATC) system in place at 500 feet or below. “We have to work with many non-traditional aviation companies to figure out how to ensure safety and efficiency with Air Traffic Control at low altitudes for these small UAS systems, but we’re still learning.”

And with small UAS making an entrance into airspace, there will be plenty more air traffic to deal with. Which means not only a new ATC system but new infrastructure as well.

“The volume of traffic will potentially increase dramatically as we introduce UAS into the system and [the FAA] needs to have the facilities and equipment to be able to handle,” said Pete Bunce.

Because of this rise in small UAS air traffic, Bunce noted that while these systems won’t require pilots, they will potentially require ATCs to direct them through airspace.

Automation is taking over, but Shin warns against relying on it too heavily. “We need to reexamine our use of automation in aviation,” he said. “We need to make sure we don’t take aviation all the way to the limit with automation to the point where our system cannot handle it anymore.”

But there is an upside to this imminent total automation. The panel noted that, while systems are creeping toward true autonomy, there’s the potential that nationalized airspace will disappear and be replaced by a global system negotiated mostly by machines.

“It’s inevitable,” Graham said on the issue of an eventual globalized airspace as a result of this rapidly advancing automation. “It’s just a matter of time.” 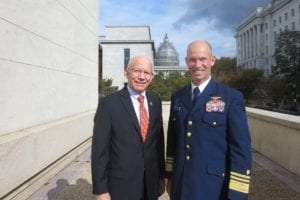