The growth of commercially developed technologies needed to boost throughput and lower costs on board civil and military aircraft is putting the squeeze on databus developers. Ethernet systems, for example, now deployed on many commercial aircraft, are not only supplying the data rates needed to run In-Flight Entertainment (IFE) systems but also adding complexity to platform architectures that continue to use legacy ARINC-429 or MIL-STD-1553 buses. To address this complexity, databus technology vendors are introducing an array of solutions that help manage the data flow between the new and legacy buses, while still addressing size, weight and power use.

“Within the defense and aerospace industry, we have experienced a significant shift over the last three decades,” says Bill Wargo, president of AIM-USA, a subsidiary of Freiburg, Germany-based AIM GmbH, which produces avionics test and simulation products. “During the 1980’s and 1990’s, avionics databus standards [such as MIL-STD-1553A/B, STANAG3910 and ARINC 429] and technologies were specifically defined and developed by and for the defense and aerospace industry.”

Now the industry is looking to “take advantage of commercially available technologies [that can be] … tailored to meet mission-specific needs for avionics applications,” he says. These include not only Avionics Full-Duplex Switched Ethernet (AFDX) or ARINC 664 Part 7 — deployed on virtually every new model aircraft — but also the ARINC 825 Controller Area Network (CAN) Bus standard systems and fiber channel-based ARINC 818 digital video. “In all three cases, the basic technology is commercially available, scalable, field proven and widely supported,” Wargo adds.

The industry’s goal is to do “more with less,” says Kurt Doppelbauer, director of aerospace sales at TTTech. “[Commercial] electronics are getting more and more powerful … and aerospace wants to benefit” from that trend, he asserts, noting as a key example multi-core processors that deliver more capability with a smaller size. And size is critical as SWaP-C (Size, Weight, Power and Cost) reduction continues to be the driving force in the industry, according to George Noh, director of sales and marketing at Holt Integrated Circuits, based in Mission Viejo, Calif. “Folded into the cost-reduction equation is the increased importance of reduced development times and certification costs.”

On a cautionary note, Doppelbauer says that a consequence of making powerful but smaller electronics is that the components become more prone to failure. This is especially noteworthy in view of “the more integrated yet distributed allocation of functions [on the platforms]. The fault tolerance requirements for the more connected system platform are increasing and have to foresee and handle such faults,” he says.

The older standards-based systems are by no means going away. ARINC 664 is out there and slowly making its way into new clean-sheet platforms, says Steve Holder, sales director of avionics at GE Intelligent Platforms, a subsidiary of GE. “The simple fact is 1553 and ARINC 429 still remain on top of the list,” he adds.

These older standards are flying on the majority of world fleet and are critical to key redesign programs, such as the Boeing 737 MAX and 777X, which will continue to use 777’s unique ARINC 629 bus standard.

Instead, legacy and new technology standards are coexisting on the same platforms in a variety of configurations with cost and safety often the driver of what is being deployed. For example, commercial aircraft have for several years been moving toward using deterministic Ethernet architectures, such as AFDX, for the main backbone bus, while continuing to rely on ARINC 429 and MIL-STD-1553 standards at the sensor or box level, says Noh. “Faster data bus architectures become quite cost-prohibitive for small box applications where the complexity is not needed.”

Airbus opted to use the military 1553 standard for some flight-critical functions on the A350 “even after spending millions of dollars developing AFDX,” Holder says, because, he was told, “for EMI [Electromagnetic Interference], you cannot beat 1553.’”

At the same time, “some AFDX is finding its way onto military aircraft,” such as the Airbus A400M and Embraer KC-390, but it has its limitations in the military context and “is very expensive,” says Harry Wild, vice president of sales of Rio Rancho, N.M.-based Alta Data Technologies. Instead, he says the military is opting more for User Datagram Protocol (UDP)-based Ethernet. “It is not so much replacing 1553, but in addition to the 1553 Bus.”

Along with Ethernet, “the use of Avionics CAN or ARINC 825 in non-flight-critical systems such as galleys and washrooms is increasing,” says Holt IC’s director of business development Anthony Murray, noting “there are well over 100 CAN busses on each of the Airbus A350 XWB and Boeing 787.”

Generally, ARINC 825 is being used “on avionics sub-systems, such as fuel systems and cockpit instrumentation,” says Wargo. “In all cases, these ‘new’ buses are not replacing the legacy buses, but are augmenting them; they are in essence subsystems that typically communicate with the main avionics buses and instruments.”

The protocol is being used in flight controls for business and regional-jets, including the Embraer Legacy 450 and Legacy 500 and Bombardier CSeries aircraft, and providing capabilities normally present only in larger aircraft, according to Jakovljevic. “In large systems, such as Boeing 787, power systems rely on TTP based platforms,” he notes, adding that “designing such systems with ARINC 429 and MIL-STD-1553 [would] not be feasible, taking into account requirements on system optimization, system capabilities and performance. [The standard] well with AFDX … they have different but complementary capabilities and both support virtual link concept.”

Technology developers are responding to the increasing diversity of technology standards on board aircraft with components designed to facilitate data integration and, of course, reduce SWaP. “Board manufacturers are starting to look at universal I/O bus cards capable of servicing numerous applications,” says Noh. “These cards, while inherently … more complex, ultimately reduce development time and certification costs across multiple platforms.”

Holt itself is developing smaller and more capable integrated circuits, such as its 3.3V HI-2130 is a BC/MT/RT MIL-STD-1553 terminal that integrates digital protocol, analog transceivers and passive transformers in a single 15mm x 15mm compact package.Data Device Corp. (DDC) “continues to offer smaller and more power efficient solutions,” says Sean Sleicher, marketing manager for data bus products with DDC, based in Bohemia, N.Y. “In the board and systems area, we struggle more with the mix of I/O than we do with density … [when] designing products with a high mix of requirements. Future products will be more configurable through the use of small form factor mezzanine cards, such as Mini-PCIe, allowing standard COTS products to offer the right I/O mix for the right applications with minimal customization.”

The company “will be announcing the smallest 1553 Remote Terminal component ever developed by the end of 2014, [and] … will [begin] introducing a new line of ARINC 429 line drivers and receivers components … [which] will be drop-in compatible with existing solutions.”

Also, Noh says many customers are coming to Holt with CAN ARINC 825 requirements that range across the airplane, including the cockpit. Holt developed and produced the first ARINC 825 compliant CAN controller with an integrated transceiver as well as Protocol Bridge ICs that allow communication between ARINC 429 and 825 buses.

Responding to customer demand for a reduction or even elimination of software certification costs in non-complex sensor systems, Holt has also introduced “autonomous devices [that require] … no MCU or software,” says Murray. These products – HI-8475 and HI8470 – are programmed entirely with hardware pins, eliminating the need for a microprocessor or software, he adds.

GE Intelligent Platforms leveraged its multiprotocol RAR15-XMC embeddable avionics module, which combines MIL-STD-1553A/B and ARINC 429 network protocols on a XMC mezzanine card, to win the contract for the redesigned mission computer that flies on the H-1 platform, Holder said. The customer now “uses one XMC for 1553 and Programmable ARINC 429 channels module … [for] what was a two- or three-PMC solution.” The company also introduced the 1553 and 429 versions last year and both have been big sellers.

Alta Data Technologies, which offers protocol translators including its mainline eNET-1553 and eNET-429 products designed to bridge the older standards and the Ethernet, tallied double digit growth in its 1553 products last year, “partially because we are green and growing and partially because we see a very high demand for our innovative 1553 products,” says Wild. It continues to refine its products: “The eNET-1553 started out as just a single, dual redundant 1553 interface … Now, [three years later], we have the eNet-MA4 which has two dual redundant 1553 channels and eight ARINC Channels, all in the same package size as our original eNet-1553,” he says.

“We [also] have seen a steady increase in sales of the Mini-PCIe product, which is the smallest standard I/O card socket form factor currently available,” says Wild. “Not only do we have customers embed them into rugged tablets for field support applications, but also into VPX systems for aircraft embedded applications.”

DDC “offers an Avionics Interface Unit (AIU) that enables seamless protocol conversion, allowing easy upgrades to Ethernet-based systems on existing 1553 and 429 data networks,” says Sleicher. “The AIU can also be used to remotely access 1553 and 429 connections efficiently via Ethernet. The on board processor and turnkey software provide programming flexibility and automatic bridging between protocols without burdening a separate host computer.” All of this technology innovation can tax the resources of the service providers, such as AIM, and customers. “For testing of protocol conversion and bus bridging applications, the testing tools need to be able to generate and analyze multiple protocols concurrently,” says Wargo. “Furthermore, accurate hardware synchronized time tagging is required as well as data correlation from different bus systems.”

More generally, test and simulation tools suppliers must continue to support legacy databuses “for the foreseeable future and address obsolescence issues,” while at the same time accounting for “the latest databus and network technology … and [providing] tools and equipment that meet the most ambitious requirements with respect to throughput, processing and storage capabilities,” said Wargo. AIM has taken care to design its offerings “around a common core with software compatibility of all products to support the same databus” to meet customer demands that test systems stay “platform independent” to avoid any fallout from sudden technology development changes.

As the technology developers continue to grapple changes brought by the Ethernet and the CAN bus, they are also eyeing efforts to deal with the use of iPads and other tablets as Class 2 electronic flight bags. “The principal challenge has been to segregate the avionics network from a traditionally non-secure consumer device,” such as the iPad, says Murray. To do this, “the industry has developed an ‘Aircraft Interface Device’ (AID), which acts as a firewall … [which] isolates the critical avionics network from devices not approved to control avionics equipment, while allowing data such as GPS map information from the avionics network to reach passenger devices such as phones, tablets and laptops or pilot electronic flight bags.” 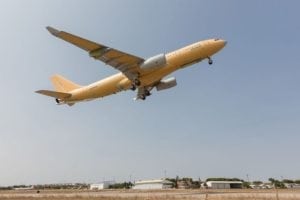 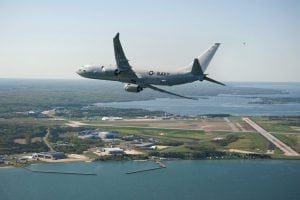