From catapult launch to wing-snagging recovery, the Boeing Insitu RQ-21A Small Tactical Unmanned Aircraft System (STUAS) will downlink imagery and data to U.S. Marine Corps ground forces and Navy ships. The Navy now plans to buy 36 RQ-21A systems, each system with five aircraft for continuous operations up to 15 hours a day or surge coverage around-the-clock. Individual aircraft provide up to 24 hours endurance and loiter at up to 15,000 ft depending on payload.

According to Insitu Senior Vice President Ryan Hartman, “It’s [built] around the fact that the Integrator is designed for unknown payloads and designed to be as flexible as possible in the integration of payloads.” The STUAS prime contractor in Bingen, Wash., already partners with the Navy on an RQ-21A Flight Plan to develop future STUAS capabilities. “There are a lot of payloads around now we have not started to integrate, but we will.”

The STUAS program office of the Naval Air Systems Command (NAVAIR) at Patuxent River, Md., declined to discuss the RQ-21A payloads or concept of operations. However, NAVAIR formally announced the STUAS Low Rate Initial Production decision in May and expects the RQ-21A to achieve Initial Operational Capability in the second quarter of fiscal 2014. Marine plans mix the 135-pound STUAS with the 375-pound, runway-recovered RQ-7B Tactical UAS in three active-duty Unmanned Air Vehicle squadrons (VMU) and one Reserve unit. Each active-duty VMU will get 81 additional Marines to operate nine RQ-21A systems in STUAS detachments on land or at sea.

Independent of the STUAS program, Insitu has demonstrated Synthetic Aperture Radar, dual electro-optical gimbals and other payloads on the Integrator platform. The company’s Sensors Directorate routinely assesses and integrates payloads from outside suppliers and develops its own technologies.

“Right now, they manage a portfolio of about 100 payloads, and we have about 60 partners that participate in our payload program,” observes Hartman. The RQ-21A configuration has payload bays to spare. “Right now, our focus is on providing more capacity, more performance. We’ll maintain the baseline vehicle with the Alticam in the nose and a family of payloads that fit in the payload bays.”

The U.S. Navy and Marines previously relied upon Insitu service contracts and field service representatives to provide Intelligence, Surveillance and Reconnaissance with the ScanEagle mini-UAS. (The Air Force bought a ScanEagle system in 2006 to deploy to Iraq.) The First Marine Expeditionary Force took ScanEagle ashore in Iraq in 2004. The UAS went to sea in 2005 and watched Somali pirates during the Maersk Alabama hostage rescue in 2009. With a heavy-fuel engine for safer shipboard operations, the ScanEagle demonstrated 28 hours endurance, but the 44-pound airplane could carry only an 8-pound payload. The bigger STUAS air vehicle uses an upgraded launch and recovery system and the same GCS to operate from expeditionary or urban sites or ship decks and provides new payload opportunities.

STUAS payload integration leverages both the bigger platform and its open architecture. “It starts with the air vehicle design itself,” explains Hartman. “ScanEagle is a flying wing with no empennage. When you add something up front, you have to add something in back to stay within CG [Center of Gravity].” The twin-boom Integrator hauls up to 25 pounds distributed in payload bays in the nose and center fuselage, and in and under each wing. Partman notes, “Flying wings and blended wing-bodies are very CG sensitive. By having an advanced tube-and-wing design, we nip that in the bud. Maintaining the configuration we have now, we can take advantage of a rapidly evolving payload market.”

Insitu engineers have a long working relationship with HoodTech Vision, in Hood River, Ore. STUAS electro-optical payloads consequently evolved from those on the ScanEagle and its SeaScan predecessor into the multi-sensor gimbals on the Integrator and RQ-21A. Hartman says, “The methodology was to figure out how to integrate a full-motion video sensor into an unmanned aircraft and design both the aircraft and the sensor to be highly integrated.” He claims comparable payloads 60 percent heavier cannot provide the same stabilization and tracking performance of the Integrator. “It’s not because other sensor providers can’t do it, but because of the high level of integration between the full-motion video sensor and Integrator.”

The Navy initiated the STUAS competition in 2007 and chose the Integrator derivative as winner in 2010. “The RQ-21A is really an evolution of the Integrator platform itself,” said Hartman. “We started with Integrator and modified it to meet the STUAS requirement. Nothing was really designed from scratch.” Like the commercial Integrator, the RQ-21A uses an Athena 111m flight control system from Rockwell Collins in Warrenton, Va. “The Athena is a great-performing autopilot, especially in the environments we’re operating in.”

The half-pound flight control system incorporates all the accelerometers, pressure transducers and other sensors needed to generate an attitude, navigation and air data solution, both to measure vehicle flight state and provide control outputs. Rockwell Collins UAS and Control Technologies Programs Manager Matt Hutchison explains, “We use MEMS [Micro-Electro-Mechanical Systems] sensors which have revolutionized the development of UAS avionics and are the basis of our Athena small-form-factor sensor suite products.” An onboard processor runs the algorithms that provide flight data and execute flight control functions. Multiple inputs/outputs integrate the autonomous control package with aircraft systems including the flight control surfaces.

The STUAS air vehicle also has a Rockwell Collins Real Time Kinematic corrected Selective Availability Anti-Spoofing Module (RTK SAASM) GPS receiver to enhance the position accuracy of the vehicle and its subsystems. The flight control system uses the GPS, for example, to position the returning air vehicle to catch the SkyHook retrieval system on a moving ship. According to Hutchison, “The UAS can now achieve centimeter-level relative navigation accuracy for autonomous capture, landing in a small footprint area, and other operations, while benefiting from the high-security features of the SAASM GPS receiver.”

The Navy received two Government-Owned, Contractor-Operated Integrator Early Operational Capability (EOC) systems in 2012 one for Marine training with VMU-3 at Twenty-Nine Palms, California and the other for NAVAIR testing, including shipboard launch and recovery aboard USS Mesa Verde in the Gulf of Mexico.

The Integrator air vehicle offers 350 W of payload power and uses an Ethernet bus to connect mixed payloads. Hartman notes, “We have an Open ICD [Interface Control Document] that defines the electrical, software and mechanical interfaces and some aerodynamic data if they bust the outer mold line.”

The flexible architecture also supports different degrees of integration. A payload fully integrated with the GCS, for example, gives the operator AVOS the Automated Visual Overlay System that depicts the vehicle acoustic footprint and sensor fields of view on one display. Hartman explains, “The operators know if they’re putting themselves or the air vehicle in position to be heard or seen and can maintain some covertness in the battlespace.” Alternatively, some UAS customers prefer a simpler, federated architecture. “The air vehicle is truly just a truck ferrying the payload into the battlespace,” says Hartman. “The operator never sees what’s happening with the payload.”

Production RQ-21As will have all the same electro-optical payload capability as the Integrator EOC systems. But according to Hartman, “What we’ve done for STUAS is evolve that with a slightly better EO camera and a better mid-wave IR with better resolution and better zoom, and focused really on the reliability and stability of the camera itself.” HoodTech Vision developed the Alticam 11EOIR2 gimbal on the RQ-21A with internal Research and Development funds. The Navy payload has four-axis stabilization built into the camera itself to improve tracking and enables the UAS operator to adjust apertures and frame rates.

The commercial Integrator demonstrated the ability to stretch voice and data links in 2009 with a communications relay package from Harris Corp., of Melbourne, Fla. The UHF/VHF relay accommodated a variety of frequencies and waveforms, including the Single-Channel Ground-Air Radio System (SINCGARS). The relay package in the RQ-21A wing bay adds the Automatic Identification System to interrogate ships for identity, position, and maneuvering data.

Integrator lineage also gave the RQ-21A a Bandit Digital data link from L-3 Communications West in Salt Lake City, Utah. “We have maintained the Bandit Data Link,” says Hartman. “We have been very pleased with the performance of Bandit and, most importantly, we’re excited about the growth of Bandit.” The payload link is compatible with Remote Operated Video Enhanced Receiver (ROVER) 4 and 5 terminals to show STUAS video directly to warfighters. It is also compatible with the Advanced Encryption Standard (AES) to improve security. Integrator has a line-of-sight communications range of more than 55 nm, with extended beyond-line-of-sight mission radius of up to 550 nm.

The STUAS command-and-control link from FreeWave Technologies in Boulder, Colo., is initially limited to line-of-sight communications out to 55 nm. Hartman says, “We have a beyond-line-of-sight capability on both ScanEagle and Integrator. What we’ve done is fly a SATCOM on both platforms, and we’re working on other Beyond-Line-Of-Sight capabilities.” He adds, “We’ve been looking at technologies to use the air vehicles themselves to go beyond line of sight... You’d basically be able to do an airborne-to-airborne communications relay.”

Like ScanEagle, the RQ-21A gives ground operators flight path control without direct flight control. Launch and recovery are automatic, and waypoints, orbits, and other mission specifics are entered before and during flight. The Small Tactical Ground Control Station UAS continues to use the ruggedized Common Open-mission Management Command and Control (ICOM2) with an intuitive drag-and-drop user interface. “ICOMC2 is designed to be common between both Scan Eagle and Integrator and useable on other platforms,” says Hartman. “It’s been one of those evolving capabilities as well. ” 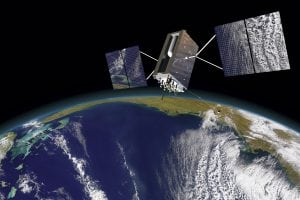