“Porter is one of the Q400 fleet leaders in obtaining the maximum capability from the Universal FMS from coupled VNAV utilization, along with working towards advanced and trajectory-based navigation procedures. We’re grateful for having been able to play a small part in their success as they moved into the LPV world,” said Norm Matheis, Universal Avionics’ regional sales manager for Canada.

Creating an approach to Runway 08 at the Billy Bishop Toronto City Airport was a unique application that showcases the capability of a WAAS/SBAS FMS-equipped Q400. The procedure designer (Air Navigation Data) created an LPV LOS procedure that was the first to be compliant with Transport Canada’s new criteria (TP308, Change 5.3). The 250 foot height above touchdown procedure minimums are significantly improved compared to existing ILS minima.

“Since the introduction of the RNAV/GNSS Runway 08 (LPV) approach at Toronto City Airport, Porter has benefitted from the lower minima and runway aligned final approach course offered by the LPV,” said Justin Tiplady, director of flight technical at Porter Airlines. “The approach further increases reliability, which helps overall customer service and operational efficiency. We have already benefited from this technology dozens of times in the last three months, so it is already paying off.” 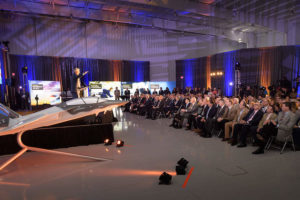