And while the overall economic outlook might be murky, there is some cause for optimism for the avionics community. Government mandates are driving demand for upgrades and new equipment. Additionally, a mature data link technology is helping to bring cloud computing to real-time flight operations. Two remote processing applications target safety and efficiency.

A wild card is the iPad, which airlines are increasingly adopting as a lower-cost Class 1 or 2 electronic flight bags (EFB) to store flight manuals and other data. But much more seems possible. One company has even developed a means of plugging iPads into the ARINC 429 data stream. Although FAA currently opposes the in-flight presentation of own-ship position on airline Class 1 and 2 EFBs, the agency has shown itself open to this for Class 2 EFBs in ground operations.

Here’s a look at some of the other technologies under consideration by U.S. airlines:

Although the most immediate focus of airspace mandates is Europe, automatic dependent surveillance-broadcast (ADS-B)-Out will be required in the United States, as well. Forward-fit and retrofit aircraft must be compliant there by 2020. The mandate allows air traffic control to monitor aircraft position and other parameters, eventually replacing radar as the primary method of surveillance. ADS-B-In, the logical successor to ADS-B-Out, will enable pilots to access traffic data, such as position, altitude, speed, heading and distance.

ADS-B-Out basically affects the transponder and the navigation system, Peterson explains. GPS, for example, has to meet certain levels of accuracy, availability and integrity. Rockwell Collins and Honeywell, among others, have products supporting the mandate.

JetBlue Airways, for one, said it looks forward to ADS-B implementation as an aid to operations in its crowded airspace. The airline is part of a FAA program to explore the benefits of ADS-B-Out. Phase 2 of that program, when it goes forward, would demonstrate the advantages of ADS-B-In.

An unusual emerging technology involves using aircraft as data collectors for runway condition calculations. The Aviation Safety Technologies (AST) software application promises to provide more objective and accurate information — and to deliver it more quickly — than is currently possible. Data from aircraft at the end of rollout — along with other inputs — is processed by a remote server and the results are posted to a Web portal in near real time.

“We add a small piece of software to the aircraft condition monitoring system that allows us to buffer up a little data report” which is sent to a carrier’s aircom server via ACARS data link, cellular or Wi-Fi, said Mike Dahl, senior managing director at Chicago-based AST. The report is then routed to AST via a virtual private network. “We use the flight data, along with environmental and tire/surface interface data, to compute the total available friction on the runway during that landing.”

Dahl says the computation takes about a second and is immediately posted to a company Internet site. He’s seeing a 55-60-second turnaround time from the end of rollout to report publication. “There are no other methods that provide friction data, except by the use of ground-based devices which require shutting down the runway. And the ground device readings don’t correlate to aircraft braking performance.” That said, the technology is still being fine-tuned and probably would be brought to the market in partnership with a larger company.

Alaska Airlines, a carrier known for its challenging operating environment, has a prototype agreement with AST to evaluate its technology product, said Linda Chism, fleet engineer, flight operations. Along with other airlines, Alaska automatically sends AST information to help calculate the available landing friction on a runway.

Alaska also is participating in a cooperative program with AST and the Anchorage and Juneau airports. This program, which runs until March 2013, will collect and compare aircraft measurements, facility measurements, meteorological conditions and pilots’ reports of braking action.

The primary benefit of a mature technology would be safety — knowing, particularly at high-volume airports, that you have very tight, science-based numbers, Chism says. “The safety benefit for an airline operation of having better intelligence on braking action could be priceless,” she adds. “When mature, this system would be useful to an airline’s dispatch operation for assessing the airport’s condition for future operations.”

For the next aircraft to land, the facility and air traffic control, the mature product will provide valuable near real-time information on the runway condition, Chism says.

Other crucial calculations can be executed promptly but remotely, saving pilots’ time and even enhancing revenue. JetBlue, for example, is moving aircraft performance calculations from pilot laptops to a remote server-based application provided by AeroData.

So just before pushback pilots will enter data, such as passenger, fuel and cargo weights, and submit it via an ACARS message. The system will calculate performance numbers and weight and balance, says Chuck Cook, the carrier’s manager of fleet programs and technology. The results of the calculations are returned via ACARS in about 30 seconds.

The system also will do automatic tail verification, he says, “to ensure the right aircraft has the right release and crew.” It even provides an excess capacity number right before pushback, enabling pilots to safely add a couple of standby passengers or more cargo on a flight.

The server-based system centralizes several operations center business processes. “We are streamlining many different workflows in the dispatch and load planning stages,” Cook says. “Additionally, we expect our pilots will spend one to two minutes less time during the very critical time window, waiting to push back from the gate.”

Cook said he expected to have the application up and running by early 2013.

Rockwell Collins, the first in the corporate market to offer synthetic vision on a head-up display, describes a “synthetic world” concept, involving greater situational awareness head-up and head-down. The company envisions not only the integration of synthetic and enhanced vision technologies but also the expansion of synthetic vision head-up and head-down to show traffic and weather, as well as terrain, obstacles and runways. Peterson sees technologies like synthetic and enhanced vision starting to arrive in airline cockpits in the next two years.

“The day that happens is the day the value proposition of the technology subsumes the cost,” he says. Two things will happen to make that possible, he says. First is the “Moore’s Law” effect, where the technology gets smaller, faster and cheaper as it progresses until it reaches the point where affordability favors adoption.

As the cost trends downward and as tangible and quantifiable benefits culled from experience in business aviation trend upward, the affordability and advantage of the technologies will spur adoption. Peterson sees airlines with challenging conditions, such as low visibility, mountainous terrain and high-cost-of-diversion airspace, as potential early adopters. Among the expected benefits of synthetic vision technology are lower approach minimums, more stabilized approaches, more consistent touchdown points and fewer diversions. Rockwell Collins, Honeywell and other avionics companies have invested heavily in augmented awareness technologies.

iPads in The Cockpit

Despite current regulatory constraints, the devices probably have legs. The big advantage is that they are so easily mobile, says Marcel Versteeg, managing director of Netherlands-based VZM Management Services. He envisions iPads not only as flight bags but as electronic tech logs, where the pilot can report maintenance issues and send the information to the ground.

JetBlue sees a bright future for the devices. It is planning to retire its current Class 1 EFBs — pilot laptops — and replace them, in part, with iPads. Although JetBlue is technology-agnostic, the iPad form factor, Internet connectivity, search and display capabilities are attractive, Cook says. JetBlue said it planned to launch a test group of some 50 iPads in late 2012 and, if all goes well, to deploy them early in 2013.

“I see the iPad as the pilot’s mobile flight kit that he takes with him in and out of the cockpit, that has his manuals, e-mails and information-changing notices an Internet resource to grab information.”

Other airlines are also announcing iPad EFB programs. In September, FAA approved American Airlines’ expansion of its iPad EFB program, making it the first commercial carrier to receive FAA approval to use the iPad in the cockpit during all phases of flight. American pilots will use the FAA-approved Jeppesen iPad application to replace the 35-pound standard bag from each AA plane, which will save the carrier an estimated $1.2 million of fuel annually. Additionally, in August, Mesa Air Group received FAA approval to begin a six-month validation process using iPads as Class I EFBs. Qantas Airways will be the launch customer for the Airbus iPad EFB “FlySmart with Airbus” application.

The next big business case could be cockpit digital charting, Cook says. The logistics support chain for paper charts can be very expensive and time-consuming. iPads could transform an up-to-two-week distribution cycle to “a simple button click” and a few minutes’ wait, he says.

JetBlue has an application from WSI that lets you update the weather before departure. The graphical display is much easier to interpret and tell where turbulence is than the textual description used in the carrier’s flight release system now.

Avionics & Systems Integration Group (ASIG) is in the forefront of the iPad push. It has developed the flyTab Class 2 implementation, including crashworthy mounts, power conditioning and a converter box that allows the iPad to display data from the 429 bus. The ability to hook into the wire eliminates the latency issue, says Luke Ribich, ASIG managing director. The company’s FlightTab application is able to show things like own-ship position on maps, moving maps, chart centering, time to/from destination or waypoint, route and traffic, he says.

The company is working on three supplemental type certificates (STCs) for applications involving a “quasi-governmental” operator in Canada and a Part 125 operator, Ribich says.

There are, however, limitations to iPad use even if the device is connected to the avionics system. Current regulations prevent tethered devices from displaying an aircraft’s own-ship position while airborne, ruling out display of systems such as traffic avoidance and radar.

Ribich acknowledges the regulatory hurdles facing in-flight, own-ship displays in commercial aviation. However, “based upon the FAA’s own NextGen roadmap and other public statements, we believe it is only a matter of time (less not more) until the FAA capitulates on this issue, provided the source of position data for things like taxiway incursion and other ships position[s] is predicated upon ships systems[and] sensors,” he adds.

ASIG envisions applications such as traffic overlays, weather overlays — based on radar information, not Internet connectivity — terrain awareness warning and cockpit/cabin security. The iPad could even replace displays for non-flight-critical functions, the company says. And, in the instance of instrument failure, an iPad would certainly be better than nothing. 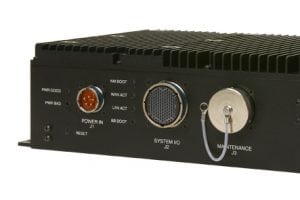