FAA moved closer to allowing unmanned aircraft systems (UAS), commonly and ominously called drones in mainstream media, into U.S. airspace. In March, the agency asked for public input on its selection process for six UAS test sites. The test sites will allow the agency to collate data to allow safe and efficient integration of the UASs into the National Airspace (NAS). These test sites are the first steps to integrate UASs into the NAS by 2015, as mandated under the recently passed FAA Reauthorization legislation.

As of now, civilian use of UASs is restricted and subject to a lengthy authorization process, much to the frustration of the industry. Unmanned systems have long proved their worth in the military sector, and the potential civilian uses for UASs abound, ranging from border and natural disaster surveillance, aerial photography, wildlife monitoring, agriculture applications, news coverage, mapping and more.

The integration of UAS into civilian airspace is a big issue, and one that has been of interest for a long time. However, this is a very, very small step.

This is a great first step to allow unmanned systems in the airspace. The integration of UAS into civilian airspace is a big issue, and one that has been of interest for a long time. However, this is a very, very small step; at this point, the agency is simply asking for public input on the selection the sites. Site selection will begin later. In addition, FAA said it is working toward publication of a proposed rule on small UAS this year, and it has convened an Aviation Rulemaking Committee to study a range of UAS integration issues. All of which means more committee meetings, more public comment periods, and more time.

“The FAA has a proven track record of safely introducing new technology and aircraft into the NAS, and I am confident we will successfully meet the challenges posed by UAS technology,” said FAA Acting Administrator Michael Huerta.

But in three years? At this point, we’re just asking to input on criteria for the sites. Based on the bureaucracy this process has yet to go through, it’ll be months before the sites are selected, to say nothing of the actual testing/data collection that will take place. “Unmanned aircraft will be the next big revolution in the aerospace industry, and the creation of these test sites will mark the beginning of what will one day be a common occurrence, manned and unmanned aircraft safely flying together in the same airspace,” said Michael Toscano, president and CEO of the Association of Unmanned Vehicle Systems International (AUVSI).

Call me cynical, but NextGen, FAA’s ambitious multibillion dollar airspace modernization initiative, hasn’t exactly rolled out as quickly and efficiently as everyone had hoped, so I don’t have a lot of confidence that this “revolution” will happen in the three years. Outside the institutional issues required for this data collection, there’s the technology and equipment. The airframes are ready, but the communications/data link channels? Pilot training? And what about the air traffic controllers? What does the communications look like with the pilot in the cockpit of a 737 and the pilot of a UAS? And this is all happening concurrently with NextGen, so how will the integration work relative to that?

Additionally, despite the best efforts of AUVSI and other industry groups, I think there is a brewing PR problem among the general population in the United States that envisions a sky darkened by “drones” surveilling our every move from our already-too-crowded skies. “Let’s make it clear that Americans are deeply concerned that drones not become a common feature of our skies until strong privacy protections are in place to ensure they do not become tools for routine aerial surveillance of American life,” the American Civil Liberties Union (ACLU) posted on its site in February following the FAA reauthorization’s passage. (For the record, I’ve never heard anyone in the aviation industry use the word “drone” and I think the “Big Brother” fears raised by ACLU and others are alarmist, at best, but it is another matter to be addressed in the integration process.)

It’s a very complicated issue and certainly UAS companies have already begun their work on civilian applications of UASs, so it seems the industry is ready. As always, I remain hopeful and optimistic that this can all happen in the time frame set forth. But, 2015 is coming up fast. 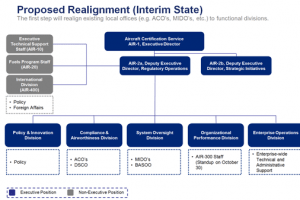