The test, using Airbus's dedicated A320 test aircraft flying from Toulouse, France, to Copenhagen and Stockholm, used Initial-4D (I-4D) trajectory management, which relies on an aircraft function to predict and transmit data to the ground in order to accurately fly a trajectory. It is described in three dimensions (lateral, longitudinal and vertical) and it includes one target time at a specific merging point (time as the fourth dimension), Airbus said.

Once proven and industrialized, it will allow aircraft to plan and fly an optimized and efficient profile without any need for the controllers to provide any vectoring instruction. This will bring better predictability of the traffic flows and facilitate Continuous Descent Operations into airports. The end result being a reduction in fuel burn and emissions, which is in line with FAA and Eurocontrol's NextGen and SESAR air traffic modernization programs, respectively.

More flight trials and simulations are planned in 2012 and 2013. The first I-4D operation is planned in Europe from 2018 onwards. 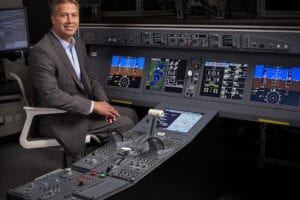