The four-year, $63.4 billion "FAA Air Transportation Modernization and Safety Improvement Act" passed the Senate on Monday by a 75-20 vote; the House passed the measure by a 248-169 vote on Friday. The bill now moves to President Obama's desk for signature. FAA has been operating under a series of nearly two dozen short-term funding reauthorizations since the last measure expired in 2007. Political wrangling over funding measures partially shutdown the agency last year.

“This bill is a huge win for America’s economy, for passenger safety, and for the aviation industry,” said Sen. Jay Rockefeller, chairman of the Senate Commerce, Science and Transportation committee. “From the start, our goal was preserving the safest, most efficient, and modern aviation system in the world. And we know a healthy and growing aviation industry is fundamentally important for the economic future of our country. I’m proud that Congress has passed comprehensive, bipartisan legislation that will support jobs and consumers.”

"This four-year reauthorization provides the FAA with the roadmap to implement a Next Generation Air Traffic System, so that we will be able to meet America's aviation needs of today and tomorrow," said Ed Bolen, president and CEO of the National Business Aviation Association (NBAA).

Among the provisions, the bill will

-- Mandate the development of precision navigation procedures at the nation’s largest 35 airports by 2015; 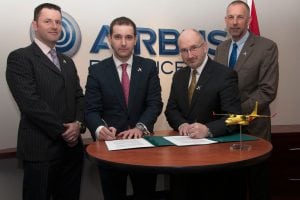