When JetBlue Airways and FAA announced their partnership to equip JetBlue A320s for ADS-B Out capability, subsidized by $4.2 million in federal dollars, the reporters in the peanut gallery wanted to know how FAA — or anybody — planned to outfit the rest of the United States fleet.

It’s a troubling question that overshadows all discussions of NextGen. By FAA’s own calculation, industry’s cost to equip for ADS-B Out will range from $2.5 billion to $6.2 billion, making the laudable program with JetBlue, a similar partnership with US Airways and other efforts seem like the proverbial drop-in-the-bucket. Estimates of the overall cost of NextGen to airlines and other airspace users range from $12 billion to $20 billion.

There are still other challenges of standardization, integration, harmonization and, ominously, allocation of spectrum for pieces like GPS and data communications. But for now, cost intrudes upon every waking thought of NextGen. And the prospect of a National Infrastructure Bank notwithstanding, substantial federal government support seems remote with the country $14 trillion in debt and Congress in a cost-cutting mood.

It’s a similar situation in Europe, where 18 “pioneer” airlines have proven ADS-B for air-traffic services, and the SESAR Joint Undertaking has embarked on 29 validation projects this year to further prime the pump. But inevitably cost clouds the vision of the Single European Sky.

There are still challenges of standardization, integration, harmonization and spectrum, but cost intrudes on every waking thought of NextGen

Since my last dispatch, I’ve heard the cost conundrum discussed on both sides of the Atlantic. Here’s some perspectives:

Sharing his thoughts at the FAA Forecast Conference in mid-February, Will Ris, senior vice president of government affairs for AMR Corp. and American Airlines, said, “I’ll tell you how we think we should get there. It’s not working so well, but I’ll give you the argument at any rate. We have an air-traffic control system today that is largely ground based. All we’re doing when we’re talking about NextGen is we’re taking a known technology — GPS technology — and moving part of the equipment in the air and part of the equipment will be on the ground.

“It is our view that that air-traffic control system should continue to be financed and supported by the federal government because that’s after all, where all the ticket taxes are going and that’s the format we’ve had for all these years,” Ris argued. “We’re just changing the location of some of the equipment. That is not a position that anybody is saluting because that would mean the federal government would be paying for equipage in the airplanes. But that would be what we think would be the right public policy.”

In a keynote speech at the conference, Alaska Airlines CEO William Ayer cited his company’s participation in the “Greener Skies Over Seattle” project to implement Required Navigation Performance (RNP) approaches to each runway end at Seattle-Tacoma International Airport. “The Greener Skies project represents a microcosm of the various elements that must be met in order to truly modernize the National Airspace System,” Ayer said. “We believe that what we’re doing in Seattle can serve as a template for advancing NextGen in other parts of the country. One of the keys to this is the FAA shifting to a ‘best equipped, best served’ standard, and we very much applaud that philosophical shift.

“But to be candid, there are many skeptics who aren’t sure the FAA can implement the major overhaul that NextGen represents,” he added. “So we’ve got a bit of a chicken-and-egg problem with the funding and the equipage side. We’re advocates for doing more of these demonstration projects, proving the benefits and making the case that a substantial long-term investment is going to be required.”

The cost to industry of NextGen and SESAR came up weeks later in a panel discussion at ATC Global in Amsterdam. “I’m not the customer; I’m just paying the enroute charges,” argued Capt. Michiel Van Dorst, executive vice president, Flight Operations, with KLM. “This is a burden which the airlines cannot take on by themselves, pre-financing.” But Van Dorst said a best equipped, best served approach is an incentive for airlines to equip, because “we are fighting for every 20 seconds (of) throughput time.”

An interesting reverse argument was offered by Steve Fulton, technical fellow with GE Aviation. “We’re grossly underestimating what the cost of the current system is in its underperformance,” said Fulton. 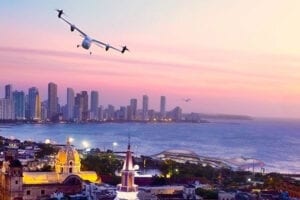 Future Conflicts May Require "Logistics At the Edge"