ITT Electronic Warfare Systems, Raytheon, Northrop Grumman and BAE Systems each received contracts of $42 million for the technology maturation phase of the program, due to be completed in April 2012. The four contractors and industry partners participated in technology maturation trade studies awarded by the Navy in January 2009.

ITT and Boeing have teamed for the NGJ program, as have BAE Systems and Cobham.

The NGJ is intended to counter advanced, integrated air defenses, communications systems, datalinks and non-traditional electronic threats, replacing the ALQ-99 Tactical Jamming System used on the EA-6B Prowler and E/A-18G Growler electronic warfare aircraft. With the EA-6B being retired, the NGJ will be incorporated on the Growler and is envisioned for the F-35 Joint Strike Fighter.

First fielded in the 1970s, the podded ALQ-99 jamming system has been upgraded over time but is considered inadequate to deal with newer, networked air defenses equipped with counter-countermeasures. Technology areas being explored for the NGJ include broadband active, electronically scanned arrays (AESA), digitized exciters, beamformers and high-power amplifiers.

“The bringing of a broadband, electronically steerable antenna set is really the tipping point within this picture,” Eduardo Palacio, ITT Electronic Systems vice president of programs, told Avionics Military. “It is that inclusion that allows this weapons system to do the many things it needs to do as envisioned today, and it also gives the government the capability to use this mission system for yet-to-be accessed or envisioned missions. It provides the agility not only in steering, but in beam shaping and the number of beams that makes this a truly capable system over many years to come. That is the critical aspect of the new architecture, and of course then you build a system around that.”

The program’s technology maturation phase will be followed by technology development, a competitive prototyping phase or fly-off involving just two contractors. After the prototype phase, the Navy will award a single vendor for engineering and manufacturing development and ultimately, low-rate initial production. 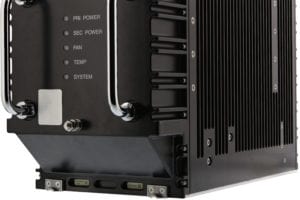