Depending on your background, you might be curious as to what wireless data transmission is and if you need that capability aboard your aircraft. Some people resist technology (late adopters) while others understand the benefits and pave the way, sometimes unknowingly creating the standard for an industry (early adopters).

I know the size of my fingers increase inversely with the time left remaining to stream the data. As my fingers grow, they somehow manage to strike other unintended keys, corrupting the data as it is entered. In fact, fingers can get even larger when people talk to you and ask questions while "loading the box." This can have the undesired consequences of taking us to places we didn’t want to go.

So managing data wirelessly not only saves paper and money, but also protects the integrity of the data you are trying to work with. It reduces the work load, allowing everyone to concentrate on the task at hand. It will allow multiple customers to receive their data simultaneously at different locations, and if necessary verify or make modifications quickly.

For example, a flight operated by your company is about to leave and another airline cancels their flight. Suddenly, several passengers arrive at the gate with baggage and live cargo ramp side. Would you be able to accommodate those passengers, including their checked bags, plus the live cargo? Would you have to incur a delay until the paperwork is sorted out? Even worse is accepting the passengers but leaving their checked bags behind and sending the live cargo to the wrong city.

Now, what if there was a way the ramp agent could send the information concerning the live cargo wirelessly to the load planner at the AOC, who can now modify the weight and balance, notify the inbound station and send a revised load planning document to the aircraft’s printer and updated performance data directly to the FMCs.

Most of us airline types are familiar with the Aircraft Communications Addressing and Reporting System (ACARS). Even the military has decided to use ACARS due do its low cost, reliability and functionality. ACARS typically uses VHF frequencies such as 129.125 in North America, providing about 1200 baud for AOC and Air Traffic Services (ATS) data communications. This includes Controller Pilot Data Link Communications (CPDLC), which tend to be used more with satcom, allowing pilots and air-traffic controllers to communicate directly with each other via data messages.

As we travel down the path of Global Air Traffic Management, aircraft and infrastructure will need to accommodate the increased volume of data and meet the necessary latency requirements associated with initiatives such as Eurocontrol’s Link 2000+ and other communications, navigation and surveillance (CNS) challenges.

Satcom is also available for both AOC and ATC data management, especially over water and in areas outside of VHF coverage. Inmarsat offers both voice and data coverage for AOC and ATS (FANS 1A) communications. Iridium offers voice and data coverage (including coverage at the polar regions) for AOC communications, and is participating as a stakeholder in FAA’s Performance-Based Aviation Rulemaking Committee Airspace Work Group (PARC AWG) for FANS 1A certification. For example, FedEx uses Iridium to support ACARS on its fleet of Boeing 757s when they are outside FedEx hubs.

With the advent of electronic flight bags (EFB), the necessity to move large data files between the aircraft and AOC quickly outgrew the capabilities of traditional communication mediums such as VHF, satcom or high-frequency data link (HFDL). Depending on the age and class of an EFB, supplying it with reliable and relevant data is challenging. Universal Serial Bus, or USBs, were the original conduit to update most EFBs. But a wireless solution is essential to the proliferation of "paperless cockpits" and the ever growing volume of data that became bottlenecked between the aircraft, AOC and its customers.

Operators who favor adopting 802.11 wireless technology can expect a significant increase in fuel savings and operational reliability, with a reduction in data corruption.

In a recent interview, Joe Slavinsky, FedEx Avionics Data Management and Communications Department manager and group engineer, explained how the cargo carrier has applied 802.11 as its medium for wireless data communications. A 10-year veteran of the Air Force who has worked the better part of a decade at FedEx, Slavinsky has witnessed the transition in many technologies.

FedEx has been using 802.11b in its hubs since 1997, using wireless technology to transfer data between the AOC and its fleet. The carrier uses 802.11 wireless data transmissions to support data movement involving MD11, MD10, B757 and A300/310 aircraft.

Slavinsky said FedEx relies on 802.11 for the transfer of Flight Operational Quality Assurance (FOQA) and Digital Flight Data Management Unit (DFDMU) data collected from the Aircraft Condition Monitoring System (ACMS) unit. FedEx is pleased with the technology due to its cost ($0 per kb), reliability, data security and its ability to handle congestion during peak saturation periods. The carrier is planning to transition to 802.11n with improved throughput for its future wireless data needs.

For operators who do not have the size or technical support staff to illuminate their hubs or outlying stations with 802.11, ARINC offers a turnkey solution known as "Gate Fusion." The company can provide reliable 802.11 coverage to a customer’s specification, when and where it is needed with "just-in-time deployment." Depending on the location, it can provide the service with as little as three to four months lead time, according to Bob Lentz, ARINC senior manager.

As more demand is placed on 802.11 wireless data communications, an operator might not receive the needed data, especially when several applications are competing for bandwidth in an unregulated environment. So ARINC not only supplies the 802.11 illumination, but services to ARINC 830 specification to better manage the volume, with data prioritization and data delivery service. This forward stored data will allow scheduled delivery, providing a more efficient and reliable mechanism of data transfer. Lentz said this approach ultimately costs less than when customers attempt 802.11 on their own.

The use of 802.11 works well for AOC data, and the system can support a gamut of other peripheral support equipment such as bar code scanners, quick access recorders, laptop computers, radio frequency identification tags, remote cameras and deicing systems. The technology also supports many passenger comforts and entertainment features, ranging from movie server updating to Voice Over Internet Protocol (VoIP) and Wi-Fi connectivity while on the ground. The next generation of aircraft, such as the Boeing 787 Dreamliner, will require 802.11 for IP access for normal operations.

In the meantime, there are many conflicting patent disputes that have effectively held the technology back from mainstream proliferation. Some airports will not permit tenant airlines to install 802.11 antennas on the airport property. As a result, many potential users and beneficiaries have been watching from the sidelines.

If you require wireless AOC data communications both in flight and on the ground and don’t have satcom, 802.11 or VHF coverage, you might want to consider HFDL. Today ARINC has 62 HFDL customers with 820 daily aircraft users. ARINC Principle Engineer (and pilot) John Patterson is quick to tell you, "HFDL is not dead!"

Unlike HF voice that requires 7-9 Khz to be discernable, HFDL can reliably operate in 2.4 Khz atmospheric conditions. For those who recall the Great Halloween Solar Storm of 2003, satellite voice communications were knocked out for the duration, but HFDL was still delivering. So HF has a whole new look when you investigate the benefits of HFDL communications.

Used primarily for AOC communications, this technology continues to participate in ATS (FANS 1A) trials for potential certification. HFDL is participating in a CPDLC evaluation in the Oakland Flight Information Region (FIR) and Automatic Dependent Surveillance-Contract (ADS-C) testing for 30/30 (30 nm lateral/30 nm longitudinal) separation. Some manufacturers are no longer prohibiting HFDL transmissions while on the ground. This provides the opportunity for a quick turn and transfer of AOC data such as flight plans and performance data.

According to Patterson, if you already have HF installed, you are almost there. The additional equipment necessary for data communications can be installed during a remain on overnight (RON) service check or heavy check with minimal training costs.

With 31 independent frequencies, there are no stuck data issues and plenty of polar coverage, with Boeing 777 traffic and others communicating daily from the North Pole. The Airbus A380 recently completed testing over Antarctica.

In September, ARINC said air-ground message volume on its global HFDL service exceeded 1 million messages in July and August. The system handles 35,000 messages per day, with a delivery success rate above 95 percent, according to ARINC. More than 1,200 aircraft, operated by 62 airlines, use ARINC’s HFDL service, the company said. "Only ARINC’s HFDL service can provide commercial aviation with seamless data communications coverage in virtually every corner of the globe," stated Mike Dufton, ARINC senior director of sales. "HFDL-equipped aircraft today are never out of touch."

An emerging technology to keep an eye on is 3G wireless used for AOC data transfer. Formally known as Third Generation International Mobile Telecommunications-2000, 3G can provide download speeds up to 14.4 Mbit/s, supporting voice and data simultaneously. Hardware is being developed to support a bank of 3G devices aimed at providing global high-speed IP access. This might be a "game changer" and should be monitored closely.

If you have a teenager, you are probably all too aware of the cost of ineffective wireless data management, better known as text messaging. Fortunately, wireless data managed effectively saves time, money and labor while increasing safety and passenger comfort.

With pending compliance issues such as Link 2000+ in the not-too-distant future, late adopters are advised to move from the sidelines and get involved now. Also consider that more than one airline has had to divert due to an inoperable or unavailable HF voice capability. When you consider costly diversions, unnecessary maintenance, flight delays and long range cruise at inefficient altitudes, a business case can be supported for wireless data communication.

Chris Baur, an airline and former military and government pilot with more than 11,000 flight hours, is president of Hughes Aerospace Corp., based in Houston. 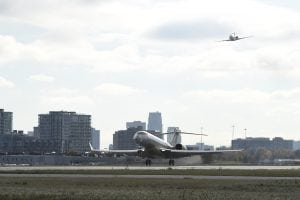