By taking advantage of commercial advances in glass and graphics generators, display manufacturers are able to design and manufacture lightweight, low-cost cockpit displays that also have the functionality and symbology necessary for flight governed by Required Navigation Performance (RNP) and Automatic Dependent Surveillance-Broadcast (ADS-B).

That’s certainly the case with one of the airline industry’s most extensive cockpit upgrade programs — GE Aviation’s contract to upgrade the flight decks of Southwest Airlines Boeing 737-300 and -700 aircraft (Avionics, February 2009, p. 10). What made the program attractive to Southwest was GE’s ability to leverage the cost savings and next-generation technologies being generated by commercial electronics.

New glass that has been developed for high-definition television and laptop computers is bringing other benefits to new displays, particularly readability/brightness and larger viewing angles.

The Southwest cockpit upgrade is the first application of GE Aviation’s 15.4-inch SDS-6000 large area, primary flight display. The airline and GE had been discussing the retrofit program for about five years, according to Carlisle.

"Southwest wanted simplicity," he said. "They wanted pilots to have similar symbology from the NGs to the Classics in order to reduce pilot training costs. When considering symbology on a next-generation platform we needed to find a simplistic way to display information that is intuitive to use."

Such at-a-glance symbology will become increasingly important as displays are called upon to deliver the capability of RNP and ADS-B.

"Some of these future mandates will drive the need for cockpit upgrades," said Carlisle. "ADS-B is the driving force; it is all about graphics processing and the ability to redraw and refresh the graphics to show all the traffic around you. Some aircraft will struggle in reaching that capability, so we’re looking at lots of different platform opportunities (for retrofit)."

For such future programs, GE Aviation will employ what Carlisle calls "model-based design techniques, where we can use graphical modeling tools to quickly develop formats and symbology for displays."

He explained: "Traditionally, we would develop hardware and software to reside on the display. A model-based design philosophy lets us quickly get to a design solution in as little as two months, versus 18 months the other way. Symbology changes can occur at the beginning of the development cycle rather than at the end."

As airline operators transition from the traditional 6-inch by 8-inch displays (two for the pilot; two for the co-pilot) to a single, larger display like those developed by GE Aviation for the 737 or the 15-inch displays designed for the Boeing 787 by Rockwell Collins, the need for redundancy becomes a key driver in design and development of such systems.

"With a 6 x 8 display, if one fails you have to operate the other in compact mode, which increases pilot workload," explained Carlisle. "So for our single display, we created a dual-channel system with two electronic and power channels, each of which can provide 100-percent functionality on the display. Having both channels hot is novel and unique in the marketplace, and the reason we think there is significant potential in the retrofit market across different platforms."

The Southwest contract is GE Aviation’s largest display development program. The company was in the first phase of symbology validation with Southwest and Boeing, which is serving as lead integrator of the flight deck upgrade. Prototype hardware is expected to be available late this year or early next year, with Boeing certification planned for late 2010. First installation is planned for 2011.

When all is said and done, 2009 might just be the year that touchscreen displays begin to make a real impact on flight decks. The affordability of COTS touch screens has brought the technology to the fore. Techniques for ruggedization, avionics-grade coatings and sunlight readability have made it available to aviation.

"Last year, touchscreens were something that we thought were interesting; now they’re moving into a number of products," said Rob McKillip, senior director of the Rockwell Collins Head Down Display Center.

The key to sunlight readability is optical bonding, said Vince Marzen, Rockwell Collins principal engineering manager. "Traditionally you have a glass-to-air interface, which has a certain index of refraction in which light gets reflected off the surface," he explained. "With optical bonding, we physically attach the touchscreen to the LCD with index matching adhesive, which minimizes the reflection."

Rockwell Collins is taking advantage of its expertise in that area to start a new product line — electronic flight bags (EFBs). Last September, the company announced an agreement with Airbus to provide side displays and docking stations for a new Class 2 EFB for the A320 family. The Rockwell Collins system includes two touchscreen, large-format displays integrated in both sides of the cockpit and two docking stations, each capable of hosting a laptop running EFB application software.

Touchscreens for the Rockwell Collins EFB products will be force activated. They will be different than the touch screens on an Apple iPhone, for example, in that functions can’t be activated by a slight touch or accidental brush.

"The challenge is making sure we have all the flight-relevant obstacles such as antennas," visible to pilots, said McKillip. "The databases available are good at terrain because mountains don’t move. But buildings can be built."

"It replaces the cues the pilot gets when looking out the window when he is on instruments — all the terrain, his angle approaching the runway," said Chad Cundiff, Honeywell vice president of crew interface products. "We went through a number of flight test programs to hone the symbology, and used the symbology developed for head-up displays and put it on the head-down display. We also tried to utilize the symbology to give the pilot a sense of altitude and speed, which they pick up naturally without having to scan for it."

Honeywell’s goal is to spread SVS technology to other aircraft types in the next year or two. Already, Dassault Aviation has chosen the company’s Integrated Primary Flight Display (IPFD), the foundation of the SV-PFD, for the next iteration of its EASy flight deck.

Synthetic vision capability was also part of a technology demonstration program that Honeywell conducted to combat brownout situations for helicopters landing in sandy, desert environments. Called "Sandblaster," the approach combines synthetic vision with enhanced visual sensors to provide pilots a more complete picture of the landing zone, and the towers, cars and other obstacles on the ground.

Like other manufacturers, Honeywell is adding its own aerospace expertise to COTS products to design displays that are lighter and more reliable, with enhanced functionality.

Said Cundiff: "The next generation will consist of smaller packages — the back end of the display — and larger display areas. Besides weight and size, you want to keep installation simple. You also want fewer displays and new types of interfaces such as voice recognition and touchscreens."

Cost efficiencies developed in the commercial electronics sector and transitioned to aerospace are expected to help some airlines make the business case for installing head-up displays in aircraft for which they may not have done so before. That’s what BAE Systems had in mind when it developed the Q-HUD for transport and business aircraft.

Rather than projecting an image onto the surface of the HUD, the patented technology manipulates light using holographic waveguides to generate the symbology within the glass. Such a configuration maximizes headroom, and reduces size, weight and cost.

One of the key performance features of the HUD is the size of the head-motion box, the area on the face of the glass where a pilot can move his head and still see the entirety of the image.

"With Q-HUD, because the image comes out parallel from the combiner, the pilot has more movement than with a projector-style HUD," said Paul Childs, BAE technology lead for the program.

The total viewing area of Q-HUD, Childs said, is 15 times greater than a conventional HUD. "The enabling technology is the waveguide technology," he explained. "When you inject the image into the side of the glass, the image propagates down the glass, hits the hologram and is released to the eye of the pilot."

Q-HUD was demonstrated for the first time in October at the National Business Aviation Association convention in Orlando. A second generation B-model is expected to be completed by this summer, according to Ric Morrow, BAE director of commercial avionics business development, followed by a flyable demonstrator next year.

The holographic technology for Q-HUD was developed originally by BAE as a monocular helmet-mounted display for Army helicopter pilots that is called "Q-Sight."

"One of the benefits of Q-Sight over a HUD in a rotary application is that you can develop a tracked version that gives you a low-cost helmet tracker so the pilot can cue a sensor or weapon system off axis," said John Nix, BAE vice president of business development for defense avionics. "We have the capability for a tracked Q-Sight already." 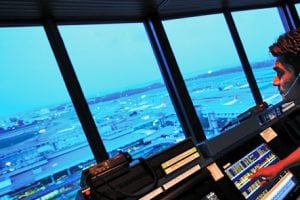