On both platforms, the Raytheon CSP will search wide areas of the battlefield, track multiple targets, and blend or fuse mid-wave infrared imagery with daylight and image-intensified television. The common sensor ball also incorporates a laser designator, laser spot tracker and eye-safe laser rangefinder to put weapons on target, and laser protection to counter battlefield threats.

Raytheon Space and Airborne Systems, El Segundo, Calif., expected to begin CSP deliveries in August or September for qualification testing in fiscal 2009. Operational testing on both the Sky Warrior UAS and Arapaho ARH is scheduled for fiscal 2011.

The CSP will enter service with the Sky Warrior First Unit Equipped that year. The same payload replaces the interim Target Acquisition Sensor Suite on the 39th production ARH-70A and enters service with the second Arapaho unit equipped in fiscal 2012. The Army plans to buy 172 CSPs for the MQ-1C and 512 payloads for the ARH-70A by 2019.

A common payload promises the Army operational, logistic and economic benefits, according to Lt. Col. Terrance Howard, product manager, Robotic and Unmanned Sensors, at the Communications and Electronics Command (CECOM), Fort Monmouth, N.J. It will give the networked UAS and ARH identical electro-optical performance to detect, identify and designate targets from survivable standoff ranges. Payloads for both aircraft will be maintained by the same Army and contractor personnel in a two-level (field and depot) maintenance scheme.

Identical payloads with the same parts should trim the training, maintenance and repair footprint of the combat aviation brigade. A life-cycle cost analysis in 2006 projected a $1.8 billion savings over 20 years using common UAS and ARH payloads rather than dedicated sensors.

A second-generation 3-to-5 micron Forward Looking Infrared (FLIR) sensor like that flying on the Predator UAV also has better range and resolution than the first-generation 8-to-12 micron FLIRs used on today’s OH-58D Kiowa Warrior armed scout helicopter. "It flies at a high altitude in various missions over deserts, over coastal environments," explained Paul Shofner, Raytheon CSP manager. "It’s a very capable detector for those environments. It’s able to see better through the atmosphere as far as humidity goes with a smaller aperture."

Raytheon makes its own mid-wave infrared (IR) detectors for the CSP and integrates the FLIR in a stabilized ball with lasers from Northrop Grumman and electro-optical (E/O) and image-intensified (I2) TV cameras from various manufacturers. The CSP can fuse IR and E/O automatically, selecting the best pixel output without operator intervention. Alternatively, operator commands can blend FLIR and TV to optimize a given scene.

The CSP awaited formal Army nomenclature, but its requirements were formulated by Training and Doctrine Command systems managers for UAVs, Reconnaissance and Attack and Aerial Common Sensor. With the same 6.5-inch aperture, the new 18-inch ball builds on the AN/AAS-52 Multi-Spectral Targeting System (MTS-A) proven on the Hellfire-armed Air Force MQ-1B Predator.

The CSP also inherits features of the bigger MTS-B on the Air Force MQ-9 Reaper and the interim AN/DAS-2 on the developmental Sky Warrior. "It is a building block on what we did for the -A and -B," said Shofner. "We made producibility and reliability improvements, added a laser spot tracker, electro-optical counter-countermeasures and internal bore sighting. It’s the first time we’ve made a system they can boresight in flight." Raytheon expects the weight of the first CSP to be just under the 155-pound Army requirement.

Significantly, the CSP automatically recognizes the type of aircraft on which it is installed, allowing maintainers to pull a payload from a Sky Warrior and mount it on an Arapaho without adjustment. Self-configuring software identifies, verifies and loads the command and control profile needed for the specific platform. CECOM believes the smart, flexible design should also minimize integration risk on two very different platforms.

With a wing one foot longer and payload bay 30 percent larger than found on the Air Force Predator, the Army Sky Warrior can carry the CSP and the Northrop Grumman STARLite synthetic aperture radar. MQ-1C prime contractor General Atomics Aeronautical Systems, of San Diego, is integrating the payloads into the UAS under a System Development and Demonstration (SDD) contract awarded in 2005.

"We have a hardware-in-the-loop-capability," said Don Cattell, director of Army programs with the General Atomics Aircraft Systems Group. "We do all of the electronic and software integration."

Payload integration starts before hardware is delivered, with an Interface Control Document from the payload supplier, an emulator for the software interface, and 3D computer aided design drawings.

The MQ-1C first flew at the end of March with the AN/DAS-2 interim payload. (Raytheon is completing 17 interim payloads.) The newer CSP drives hardware and software changes in the Sky Warrior. The different cable arrangement and electronic unit, for example, require payload tray modifications.

The Sky Warrior also has a separate payload computer independent of the flight computer. "That’s a big change from Predator," said Cattell. Separate payload and weapons computers simplify software changes. "You keep your critical flight software away from those basic changes," Cattell noted.

One of the four SDD Sky Warriors built so far will be committed to software development. "As you build capability, you need a higher-fidelity asset for simulation," said Cattell.

In addition to its new payload features, the Sky Warrior introduces other capabilities unavailable on Predator. The Army UAS will take off and land automatically and fly missions autonomously, programmed through the Army One System Ground Control Station in service with the RQ-7 Shadow and planned for the MQ-8 Fire Scout. Shadow prime contractor AAI Textron Systems, Hunt Valley, Md., is working with General Atomics to put automatic takeoff and landing into the One System.

L3 Communications is on the Sky Warrior team to provide the Tactical Common Data Link (TCDL) for line-of-sight communications. While the C-band link used by the Predator is saturated and capped at 6.3 Mbits/second, the Sky Warrior’s Ku-band link moves up to 273 Mbits/second. "You get a lot bigger pipe for data, and it’s encrypted," Cattell said. Over-the-horizon data likewise travels via TCDL satellite links.

The CSP in the Sky Warrior has dual redundant Mil-Std-1553 interfaces for control and navigation functions selecting sensors, fields of view and image fusion or blending. An Ethernet connection carries wide-area search video. In addition to the Honeywell Embedded GPS Inertial navigator and two lower-cost Rockwell Control Technologies/Athena inertial navigators on the Sky Warrior, the CSP contains its own inertial measurement unit to geolocate targets.

Lockheed Martin has already produced the AGM-114P Hellfire missile with a wider off-boresight engagement zone, greater range, 45-second reaction time and trajectories tailored to high-flying unmanned vehicles. The Army does not plan to qualify the CSP with the GBU-44/B Viper Strike laser-guided bomb dropped from the MQ-5 Hunter.

The Army wants 512 Bell ARH-70As to replace its worn and underpowered OH-58D Kiowa Warriors and now expects a First Unit Equipped in July 2011. The Arapaho abandons the Mast Mounted Sight of the Kiowa Warrior with its first-generation Common Module FLIR for a chin-mounted, multi-spectral payload.

The new ARH is also integrated around a Rockwell Collins Common Avionics Architecture System (CAAS) that gives the crew access to targeting imagery and weapons including Hellfire missiles, unguided rockets and potentially a laser-aimed.50 caliber Gatling gun. The Arapaho cockpit is also expected to receive imagery from UAS including the Sky Warrior and transmit initially still imagery and ultimately streaming video from its own sensors.

ARH-70 test helicopters and those of the first production lot will carry the FLIRSystems Britestar II electro-optical gimbal, but the CSP will equip Lot II aircraft and may be retrofitted to early production helicopters as early as 2012. Raytheon is working with Bell and General Atomics on a CSP Interface Control Document applicable to both the ARH-70A and MQ-1C.

CECOM notes that no new technology will be developed under the CSP program. The Army expects the modular payload to accommodate technology improvements as they mature independently or under other programs. 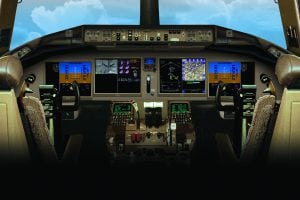