Of all the world’s major industries, there must be very few that have the same level of self-imposed standardization of equipment, operating practices and standards as that of aviation. Furthermore, under the guidance of the International Civil Aviation Organization (ICAO), which has no legal power to enforce its standards on nations or individual aircraft operators, the worldwide aviation industry has achieved a level of performance and safety that is probably unmatched in any other comparable endeavor.

Aviation’s constant drive for worldwide standardization has been the key here. And in this area, navigation and air-traffic control have been among the main beneficiaries, allowing aircraft to fly seamlessly from country to country, and continent to continent. Yet in landing guidance, probably the most demanding of all flight operations, standardization is now being reassessed, with the introduction of new technologies and with them, new capabilities.

Today, the international precision landing guidance aid is the Instrument Landing System (ILS). Developed in the 1940s, ILS has matured over the past 60 years to become the world standard, installed at thousands of airports large and small. As well, increasing numbers of ILS installations now support fully automatic "hands-off" autoland approaches to below 50 feet above the runway threshold in visibility, or Runway Visual Ranges (RVR) as low as 600 feet or less.

The differences in the guidance quality of landing systems are expressed as categories, or "CATs." Broadly, the CAT designation indicates to the pilot the combination of ceiling and RVR — commonly called "limits" — that a given system has been certified to support. On an instrument approach, pilots may not descend below the specified decision altitude/height (DA/H) or the reported RVR declared for the specific landing guidance system, unless the runway is clearly in sight. If the runway is not clearly visible at that point, they must execute a missed approach.

Operator-specific waivers, such as for a Head Up Display (HUD), or other considerations, can modify CAT values. As well, operations to CAT IIIa and IIIb limits may only be carried out by certified pilots flying aircraft with appropriately certified onboard systems.

There is not yet a CAT IIIc designation, denoting a true zero ceiling and visibility combination. While today’s autoland systems could perform CAT IIIc operations, there are currently no certified surface guidance systems that would then take the aircraft safely and accurately off the runway and guide it to the terminal.

With such remarkable performance, why should we need to replace ILS? The prime reason is that the ILS localizer beam, transmitted in the 112-118 MHz band, is vulnerable to reflections off terrain and manmade structures and, particularly, other aircraft.

The classic example of the latter problem occurred at London’s Gatwick airport many years ago — fortunately under clear skies — when the pilot of a DC-9 decided to practice an autoland approach as a preceding 737 was completing its landing roll. All went well until the 737 turned off the far end of the runway and placed its fin squarely in front of the ILS localizer antenna. This caused a major sideways deflection in the localizer beam, which the DC-9’s autoland system interpreted as the aircraft drifting off course, and responded with a hard bank to regain what appeared to be the ILS centerline. Only quick action by the crew at 600 feet above the ground prevented a tragedy.

Since that time, practice autolands require specific ATC permission, and significantly increased spacing is mandated between aircraft on ILS approaches in low-visibility conditions. As well, aircraft awaiting takeoff clearances are held well back from the ILS reflective areas around the active runways, by the use of "Hold CAT II" or "Hold CAT III" signs on the taxiways.

But these restrictions raise the second reason to eventually replace ILS. The increased bad-weather approach spacing, and the taxiing time spent by a departing aircraft to reach the runway from the "Hold" sign, reduce airport throughput and create delay, which is becoming less and less acceptable as traffic volume increases.

Currently, there are three alternatives to ILS. These are, first, variants of GPS; second, the Microwave Landing System (MLS) and third, the Transponder Landing System (TLS). Note that other than the military system mentioned, the GPS applications are equally achievable by Europe’s Galileo system, Russia’s GLONASS and other regional satellite navigation systems now being developed by China, India and Japan. 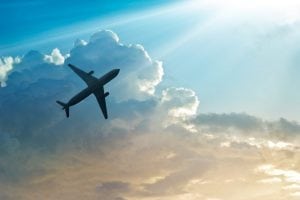 Qantas, GE Partner to Make the Most of Aviation Data Analytics