Pierre Magro was nominated head of the avionics product line within Airbus Customer Services in 2005. He is responsible for the production, quality and scheduling of all design, technical solutions and supply chain aspects related to upgrade service deliverables to customers. Magro holds an engineering degree from the Ecole Nationale d’Ingénieurs in Tarbes, France. He started his career at the Snecma military customer support directorate as an engine test facility maintenance manager. In 1991, he joined Airbus as an engine specialist within the customer services division and was seconded to the A330 General Electric and Rolls Royce flight test programs. He moved in 1996 to Airbus Transport International as product support manager and then design organization manager.

In a recent interview with Avionics Editor Bill Carey, Magro discussed the avionics upgrade market and some of the requirements airlines will face to operate in the future airspace system.

Q: Could you describe the Airbus avionics product line?

A: Our division is part of customer services, formerly called product support. It was created a few years ago. The purpose of it is to promote, propose optional upgrade services, by and large to cover all aircraft [areas], the cabin, the systems and the avionics. I’m in charge of the avionics product line, basically everything dealing with communications, navigation, data link and so on, from the earliest Airbus generation to the latest, the 380.

Q: How would you describe the upgrade market for Airbus in-service aircraft?

A: Basically, when we are talking about optional changes, we are talking about changes that are not related to in-service issues. For example, you want to install satellite communications on your aircraft; it would be an optional upgrade. When you are talking about data link, today there is no mandate. In Europe, Eurocontrol is working very hard to put in place a new way of communication between aircraft and controllers [the Link 2000+ program]. This project started a few years ago. By the time it becomes a mandate for aircraft in-service, it might be around 2014. It is in our basket as well. Required navigation performance — this function is becoming more and more important due to the traffic growth and [for] airlines to save money.... This kind of functionality is very important for operators. This, again, is a function we can offer. It is, as well, what I would call an optional upgrade. To get this upgrade, you have to install a number of systems that we would propose in the upgrade package.

Q: What is the universe of upgrades you see, in terms of the number of airframes?

A: Altogether, Airbus today has more than 4,500 aircraft in operation. We cannot afford to forget those aircraft. We have to maintain those aircraft and be next to our customers. I would say the earliest Airbus generation flying today — the 300/310 widebody family — is more than 600 aircraft. Again, it’s a lot. As you know, the production of this aircraft has been stopped, which makes the exercise even more difficult to support these aircraft. That’s a very true and potential business for us. [With the] 320 family, we’ve got more than 3,000 aircraft in service. It was certified in 1988. I would say around 1,000 aircraft have to be upgraded.... There is a need to fight obsolescence, to upgrade old generation aircraft — the (European Airline Electronic Engineering Committee) says so. They are saying that we want to carry on flying with those aircraft, but because of forthcoming airspace constraints, we will have to answer to precision navigation, we will have to go for CPDLC, so we need solutions [from the OEM]. They want us to propose packages to upgrade their fleets to a given level, which will open the door to new functionalities tomorrow.

Q: Is it difficult to forecast the resources you need for performance-based requirements?

A: You talk about Link 2000+; this project started with a pioneer phase. Tomorrow, there will be an architecture and a need for a given aircraft architecture. This is why companies like Airbus participate in working groups with airlines, with authorities, in order to know what the final product will be in order to design, hopefully as early as possible, the right definition.... Usually, the airlines want and prefer an original modification coming from the manufacturer, in this case Airbus, for many reasons. We have the aircraft configuration management and all the database, so we basically know the aircraft from the first day of delivery. We are able to know very precisely what has to be proposed to the customer, to build the package in order to get these required functions. For Link 2000+ and the CPDLC [Controller Pilot Data Link Communications] function, we can have an aircraft and we know... that this one would have to just update the software of the router, or another would need the installation of the router, the installation of the cockpit pilot interface and so on. We have a very strong position in front of the competition in terms of proposing upgrades on in-service aircraft because of our knowledge of the aircraft configuration and because we design those changes for production aircraft as well.

Q: Is there frustration in Europe regarding the definition of requirements for the future air navigation system?

A: I don’t know if we can call it frustration. It’s true, it’s not done just like that. We’ve been talking about CPDLC, about required navigation performance — those things are very long lasting projects. Altogether, at the time of the mandate, we are talking about 15 years, more or less. Of course, for the industry, it is very difficult to follow on the track of requirements coming from the authorities. This is why there are working groups. To say there is frustration — myself, working for Customer Services, I would say yes, in a way, because it is always too long, and very often we depend on the certification of the systems in order to propose and promote the systems to our customers.

Today, the avionic evolution is more discretionary than mandatory. The big difficulty that airlines as well as Airbus Customer Services have is to make the airlines understand that they have to get ready. But as you know, behind all those words there is money. As long as it is not compulsory, it is not always very easy to understand that you have to have these functions, or be ready to have these functions, on board. Each customer is a particular case. Some customers are very proactive, they always want the latest systems. Others will wait because they have a very large fleet and they don’t know what they’re going to do with a part of it — sell it or keep it — and so on.

A: Modification and function are very much linked. It’s difficult for me to talk about a given system, like, for instance, a GPS system, without talking about navigation performance. The challenge in the future is data link communication between pilots and air-traffic controllers. In terms of systems, this implies the installation of the right flight management system, to have on board the router — the Airbus system is called the ATSU (Air Traffic Services Unit). You have to have on board, I would call it the "mailbox," where you can actually write down your messages, receive your messages, on a screen. Talking about required navigation performance, you need in terms of systems, the very latest flight management system, you need GPS on board, you need a traffic collision avoidance system, terrain collision system, installed. You need to have specific devices on the navigation displays like lateral deviation at landing. Functions and systems are very much linked. Nowadays, with system integration, there are less and less standalone systems.

Q: You have said that Airbus has its own vision for integrated avionic systems. Can you describe that vision?

A: We’ve launched an independent survey of the market to see what’s going on, what do we have to do? I have to say that the conclusions are in line with what we thought, but at least it comes from outside. Basically, airlines... want to save costs for the operation and maintenance of the aircraft. Technically, they want very easy-to-use aircraft. I’m talking about flight management systems and all those very nice devices the pilots really like. Now the market is in favor of OEM solutions. [Customers] feel much better knowing that Airbus or Boeing will care about the continued airworthiness of a change, for behind money, operations and all the rest of it, there is the matter of safety as well. It’s very, very important. What the market wants as well is the best cooperation possible between suppliers, aircraft manufacturers and themselves, the customers. Last but not least, as there is no mandate today, the market wants to, not be convinced, but to understand everything that will enable their management to make the right decision in terms of what to do — to keep an aircraft, to sell it, to upgrade the aircraft because it’s a good horse and life extension has been promised by the manufacturer and it’s better to keep that aircraft than to buy another one, and so on.

Q: Does the scenario of supplier-furnished equipment make it difficult for some of the smaller avionics vendors to compete, to be a partner with Airbus if they haven’t been in the past? Is there the possibility of a less diverse supplier base?

A: I would say the tendency... is to go for partnership with strong and solid suppliers. That being said, I’m not talking about small equipment manufacturers making, for instance, a standalone standby system. Those suppliers might not work directly with Airbus, but to the point they would disappear, I don’t think so. 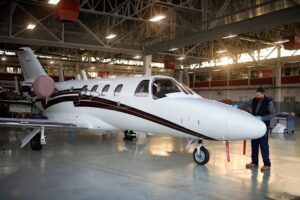