W. L. Gore & Associates won a contract to provide its Umbilical Assemblies for the A-10 Precision Engagement Kit by Lockheed Martin. This is the second contract awarded to Gore for the A-10 program.

The assemblies are flexible, offering optimized routing and have a proven flex-life in excess of 100,000 flexes. Gore Umbilical Assemblies are designed to withstand the harsh environment of a fighter aircraft, and successful pit drop testing has proven the cables to be fit for use. Visit www.gore.com.

AirCell, Louisville, Colo., released its Axxess two-channel Expansion Transceiver, which offers two additional channels of Iridium satellite service and the opportunity to double the number of simultaneous functions that passengers and flight crews can conduct.

AirCell Axxess provides automatic traffic management functions and can be included as part of an initial AirCell Axxess installation or added anytime thereafter. The system can be used for fax service and other narrowband data applications. Visit www.aircell.com.

Emteq, New Berlin, Wis., introduced its PFLX140-500 coaxial cable, which it says is the aviation industry’s lightest 50-ohm, single-conductor, double-shielded coax. The cable has a 0.140-inch diameter and weighs 1.28 pounds per 100 feet.

With an outer shield of aircraft grade polyethylene, the company says the cable offers more than 90 dB shielding effectiveness, produces low smoke and no halogen, and is resistant to Skydrol and other hydraulic fluids. The product meets FAA flammability testing requirements. Visit www.emteq.com.

Up to six audio control units can be operated together with one remote module. The system is NVIS compatible (Mil-Std Green B) and includes emergency and slaved mode operation, the company said.

Eurocopter has chosen the system as the standard intercom on the EC-145 multipurpose helicopter. Northrop Grumman selected it to be used for King Air B200 air ambulance installations. Visit www.beckerusa.com.

The ICS product functions include intercom calling, call transfer, conferencing and follow-on dialing. The products are compatible with most aircraft communication and data management units, connecting via the Arinc 429 databus. Visit www.intcomgrp.com.

Garmin said the GTX 328 is intended to serve VFR/Class 2 aircraft where there is adequate size and power consumption support for a GTX 328 unit.

The GTX 328 has a pilot interface, high-contrast LCD display and user-friendly keypad, featuring a dedicated VFR button. The GTX 328 retains many of the GTX 330 features such as displaying outside air temperature, altitude monitoring, count up and count down timers, density altitude functions and front-panel input for flight ID.

IPC 2.0 is designed for use in demanding signal processing applications such as radar, sonar and signal intelligence.

The system supports two communications models. Its messaging API provides the foundation for control and synchronization between processors with priority-based and flow-controlled messages.

The system also provides a global shared memory model that is used for the transfer of large datasets. Visit www.cwcembedded.com.

Pentek, Upper Saddle River, N.J., released its Model 7141-703 PMC/XMC module. It features two 14-bit, 125-MHz A/Ds and a Xilinx Virtex-II Pro field programmable gate array. The unit is configured as a ruggedized module, and is compatible with both cPCI and VME baseboards.

The module has an extended operating temperature range of minus 40 degrees C to 70 degrees C. Because of its high-speed capability and ruggedized construction, the 7141-703 is well suited for market sectors where there is a need for wideband software radio resources in harsh environments, including military and aerospace applications such as unmanned aerial vehicles. Visit www.pentek.com.

The dual DVI outputs are capable of independent resolutions of 1600 X 1200 pixels at 75 Hz and reach 2048 X 1536 pixels at 85 Hz. The card comes in three ruggedization levels: commercial, rugged and military. Visit www.rugged.com.

Cole Hersee Co., Boston, unveiled its Forward and Reverse Relay Module, which the company says is suited for applications where forward/reverse motor operation is necessary.

The module is able to reverse the motor’s direction automatically when the control circuit is energized with a pulse from a momentary switch. The module provides dynamic braking capability and is ignition protected. The company said the module carries a heavy load current; up to 70A at 12V DC (intermittent).

Instead of writing its own quality standard, DDC said it chose to build off the ISO 9001:2000 Quality Management System by adding sector specific requirements.

This requirement contains all the elements of ISO 9001:2000 with additional characteristics unique to the quality and reliability needs of the aerospace industry. Visit www.ddc-web.com.

The company said the FD900X3B is the only FAA PMA approved wireless audio transmitter for business aviation.

The two systems are part of the computer processing units intended for the next line of the company’s Flight Display Moving Map. Visit www.flightdisplay.com.

AgiLynx, Inc., Billerica, Mass., introduced its Lynx Series Protocol Converters which transfer data between Mil-Std-1553B and Arinc 429 data buses. The company said the data can be reformatted, rescaled and time-tagged during conversion.

The unit supports eight 429 inputs, four 429 outputs and two separate 1553 dual-redundant buses. Mil-Std-1553B addresses, 429 labels and transfer characteristics can be user loaded into non-volatile memory via laptop/desktop computer or programmed at the factory.

Designed for aviation applications, the unit is powered by aircraft 28VDC and is compliant with DO-160D and DO-178B standards. Visit www.agilynx.com.

Edmo, Spokane, Wash., is a distributor of aircraft electronics.

Arinc, of Annapolis, Md., said the eFlyBook viewer is smaller, lighter and less costly than laptop computers and tablet PCs typically used by pilots to store and read electronic documents.

The companies said the eFlyBook combines chart viewing software developed by MyAirplane.com, with a iLiad eReader, developed and manufactured by iRex Technologies of the Netherlands. Visit www.arinc.com.

PCB said the charge converters are ideal for use with charge output sensors engaged in structural testing requirements, aerospace component monitoring and environmental simulation, where installation space is restricted and mass loading is of concern.

The series, 422E9x, has been designed to address the need for lightweight charge converters, which consume a minimal amount of installation space. Models 422E91, 422E92 and 422E93 offer standard conversion sensitivities, respectively, of 0.1 mV/pC, 1.0 mV/pC, and 10 mV/pC, and frequencies from 1.5 Hz to 50 kHz. Units feature 0.25-inch diameter stainless steel housings, and are 1.6 inches in length.

An option on the converters permits channel identification, sensitivity interrogation and coordinate location information to be stored in an on-board memory circuit, recalled by simple command. Visit www.pcb.com. 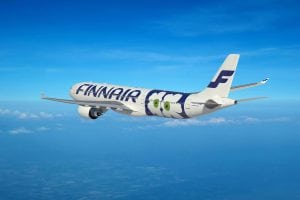 Finnair to Invest in Connected Aircraft