Corporate aviation, with its deep-pocketed customers and premium on flexibility, has always been a catalyst for innovation in avionics – from cockpit displays to in–flight entertainment to connectivity tools. Operators at the top end of the market want airplanes that can go anywhere, any time, and the customers have the wherewithal to pay for it. Today's technological and regulatory environment, however, is evolving and highly complex. The design of future airspaces and the avionics that will be required to operate in them under the most favorable circumstances are far from clear to industry at the present time. Nothing can be taken for granted by aviation stakeholders, particularly those in business and general aviation. Avionics Magazine recently visited with Steve Brown, senior vice president for operations with the National Business Aviation Association (NBAA), to discuss the corporate aviation community's avionics issues and concerns.

Avionics: What are the top avionics issues facing business aviation?

Brown: If we take avionics as a whole, one of the leading issues we have is that, as we work with planners and regulators, movement toward new avionics is benefit–driven rather than just pure mandates.

Avionics: Could you elaborate?

Brown: What we mean when we talk about a benefit–driven transition to new avionics is to make sure that those who invested early–the early adopters that you would have with any electronic capability–initially have some applications and benefits available to them and feel like they’re getting a return on their investment. It’s not a whole lot different from the computer arena. You want to make sure that, within the infrastructure, there’s real benefit to be gained in day–to–day operations. You need a little bit of immediate gratification, so you can understand why you are flying those [avionics].

Avionics: Can you give an example?

Brown: GPS came along and we had WAAS [Wide Area Augmentation System] approaches. We worked with FAA to try to expand the number of approaches into the largest number of airports as rapidly as we could. Because if people who had approach capability, with their satellite navigation receivers, flew around for months at a time and never could make a GPS approach, they’d wonder why they had the capability. It’s a matter of planning and targeting the benefits so that early adopters have real solid returns.

Avionics: Do you feel that happened in the case of WAAS?

Brown: There was good partnership between the federal government, state government and operators to identify what the primary locations should be–which cities, which airports.

Avionics: How many of your members are WAAS–equipped?

Brown: Probably a third, or so. That’s a gut kind of feel.

Avionics: Do you have concerns?

Brown: The areas where we’re urging the government to focus on more than they have in the past are really in mountainous areas, where it’s costly to have capabilities installed. Access is restricted by navigation technology and lack of radar coverage. If you can get better surveillance and navigation, you could increase the access to and capacity of the airports in mountainous areas. ADS–B [automatic dependent surveillance–broadcast] or multilateration for surveillance would help, and RNP [required navigation performance] procedures and the retention of some ILS capability would provide better navigation.

Avionics: What do you think of the coming mandate for "ADS–B–Out"?

Brown: ADS–B is another thing that’s coming along, and surveillance, obviously to phase out more expensive radar services. Ultimately, years from now, there will be communications innovations, as we go digital, vs. our current analog system. In all that, we want to make sure that the transition is benefits–driven rather than mandate–driven. The mandate should take place long after the early adopters are getting benefits and a large percentage of the population has already equipped.

Avionics: Is that how it’s working out?

Brown: Well, there’s a lot of controversy about that. Our position and our advocacy has been to make sure that mandates don’t come first, but rather that benefits come first and that mandates take care of the last few percent of people who haven’t yet equipped. The ADS–B program is in the very early [stages], so a lot of these decisions are being debated. There are people who have the opinion they’d like to go with a mandate first and early. Some of those are in government; some of those are in manufacturing. Early mandates make it easy for some people but hard for others. We haven’t picked a date ... because they haven’t even started installing the capability.

If you take transponders, for example. The mandate didn’t come until about 90 percent of the fleet was equipped. So it was not an early mandate. Typically, identifying a technology, experimenting with it, finding applications–all that sort of stuff–should be done in an R&D phase, not when you’re in deployment.

Avionics: Do you think "ADS–B–In" avionics will be important for bizav?

Brown: Our position is, we clearly need it both ways. Air traffic service providers get their benefit just from the surveillance capability, and having surveillance at lower cost than what radar systems provide. But there’s more benefit for the broader general aviation community in having traffic and weather displays, and potentially other applications in the cockpit in the future. Our point of view in working with the FAA program office and JPDO [Joint Planning and Development Office] is that we want to see both capabilities [ADS–B–Out and ADS–B–In] developed and supported by the service provider, which, in this case would be the FAA.

Avionics: Won’t the service provision be outsourced to a contractor?

Brown: A contractor will perform under a contract to FAA. FAA ultimately is the provider. It shouldn’t matter to the pilot in the cockpit. When they think of air traffic control and surveillance, they’re going to think of FAA, not the ABC Corporation. Our point of view is that FAA is the regulator and the service provider. Air traffic control is a natural monopoly, and it is best provided as a coupled service. It should remain within government. But certainly government can operate in a more business–like fashion, so they have more timely development of programs at lower cost. ... For example, utilize a contractor where you have a good performance, accountability–based system to evaluate their performance.

Avionics: What do you think of the ADS–B acquisition approach?

Brown: It’s a good approach to take. It would be nice if technology and its development were as predictable, as always hitting performance marks. FAA, as well as the Department of Defense and many federal agencies, has struggled with building and deploying technology on a given timetable. They get surprised a lot. It’s a good step to have a more business–like operation. But there’s only so much predictability you can have in R&D.

Avionics: ADS–B raises the question of a GPS backup. Do you have a favorite backup candidate?

Brown: No. [Enhanced] Loran is a possibility. Technically, it’s fine. The difficulty is for other transportation modes, [such as] rail, pipeline–it’s not as appealing as for us in aviation. As we deal with government, manufacturers and the larger transportation community, one of the things that’s talked about is which of the various options is most cost–effective. Ultimately, aviation doesn’t want to pay the freight. Like everybody else, we are looking at the various alternatives, based on the types of avionics that our members typically have installed or would install in the future.

Brown: If operators are going into an environment where they would have greater reliability of access if they had that technology available, they are certainly going to be motivated to spend the money and install the capability. We’ve seen people become very interested. I think [synthetic vision technology] will continue to expand at a pretty good rate. And, to expand to your next question, I think that all of those vision technologies will probably merge over time. So you’re going to have a common display, if you will, with fully integrated vision capabilities. And, as FAA extends more and more regulatory benefits to go with the equipment, the market will just naturally expand. But the number of locations where you really need that on a frequent basis is small.

Brown: For low–visibility operations, in particular. There are a number of offshore helicopter operators that are becoming more and more interested in synthetic. In places like the North Sea, for example.

Avionics: Is RNP important to operators of business aircraft?

Brown: Yes, if they are operating in places where they get a benefit. There are some applications in the Pacific Northwest that have been very beneficial. We have been working with FAA for implementation in oceanic airspace. The latest one we’re working on–for implementation probably in two years from now–would be in the Caribbean, likely RNP 10.

Avionics: Some corporate flight departments need to be able to fly to any airport, any time. Is there a case for them to equip with both WAAS and RNP avionics?

Brown: There will be a transition between today's ground–based navigation system and tomorrow’s space–based system. During that time, aircraft are going to have to have some of the older approach equipment on board like VORs and ILS, and people will be progressively equipping with RNP ... and WAAS.
The challenge for avionics manufacturers will be to design avionics that will permit that to occur. The challenge is to design a multifunctional navigation box which will have sensors in it that will drive different applications and presentations that would be selectable by the operator for the type of airport or navaid.
That transitional period is eight to 12 years away from now, so I think there’s adequate time for avionics manufacturers to meet these challenges. [The need] is driven by the fact that service providers in different parts of the world will be at different places in their modernization programs. 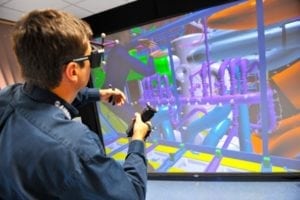