The Quint Networking Technology (QNT) program under the U.S. Defense Advanced Research Projects Agency (DARPA) plans to take network centric operations to the next level. Although the agency considers the effort to be "medium risk," it wants to enable direct digital communications among five nodes: aircraft, unmanned combat air vehicles (UCAVs), weapons, tactical unmanned air vehicles (UAVs) and dismounted ground forces-hence the name "Quint"-and to do so in a very small, robust, multiband, multifrequency software defined radio package. If successful, this demonstration program could empower dismounted ground forces as nodes in network centric operations, able to communicate digitally with the other nodes and able, for example, to take control of weapons after launch. Impacts would include improved collaborative targeting against time-critical and mobile elements, situational awareness, damage assessment and dynamic UCAV ground taxi. The program recently transitioned to Phase 2 under a team led by Rockwell Collins. Avionics Magazine talked about the promise and challenges of QNT with the program's manager, USAF Lt. Col. Steve Waller.

Avionics: What is the Quint Networking Technology (QNT) program? Can you summarize the many threads of this effort in a few sentences?
Waller: It is filling a forward gap between platforms that need to talk directly to each other-not through gateways. It is a mixture of hardware and software-a kind of simultaneous, multiband, multiwaveform radio device. That means it's capable of working with old aircraft as well as having advanced Internet or networking capability. The same hardware can migrate into better utilizing the spectrum in the future.

Avionics: Who will use it?
Waller: Quint is being built for weapons, dismounted air controllers and tactical UAVs [unmanned air vehicles]. I'm trying to make Quint compatible with hardware on aircraft or UCAVs [unmanned combat air vehicles, such as the now-cancelled Joint Unmanned Combat Air System, or J-UCAS]. Quint could network with them through MIDS/JTRS [the multifunctional information distribution system element of the emerging Joint Tactical Radio System program].

Avionics: What niche will Quint fill? How can it serve so many users?
Waller: For starters, a dismounted, ground guy doesn't have wideband IP [Internet protocol] network links today. This would be the first time that he would be IP-networked. UAVs have a tremendous problem with spectrum allocation. Quint would let the dismounted ground guy, on the fly, select, use, adjust and float in the frequency spectrum, and allow you to have a whole heck of a lot more UAVs in one small geographic area. ... We're also trying to provide small UAVs a replacement link that lets them talk directly to both weapons and bombers. Right now they just talk to their controller and that's it.

Avionics: Can you give me a scenario?
Waller: I've got a Special Ops guy on the ground with only a handheld radio-no Jeep or Humvee. There is an aircraft-an F-22 with a small diameter bomb-near him. He would like a networking radio-he's going to provide a positive ID of a target and collateral damage estimation. He wants to provide it digitally, without talking. He wants it to be easy to use, small, tough and not eat up batteries. The ground guy wants to know-without talking to the airplane-who's out there to help him. We want a way that the ground guy and the airplane can coordinate and attack. And if the weapon was being dropped by the F-22, the F-22 could positively hand off weapon control to the guy on the ground.

Avionics: Will it be a family of radios?
Waller: This is a demonstration program, so we're really making two radios. One is approximately 30 cubic inches and one is 20 cubic inches, going to 10 cubic inches.

Avionics: What's the program status?
Waller: We're building two sets of hardware. We have a working, small [software-based] Link 16 radio that is attached to a working, small-sized UHF radio. We also have TTNT [tactical targeting networking technology] radios which are larger in size. ... Essentially we will connect all three together for the first "breadboard" units. About January 2007 we should receive delivery of our first hardware build, which will be about one-fourth the size of a loaf of bread. These will run a subset of the waveforms-one UHF, Link 16 and TTNT (small form factor). I'm putting out "brassboards" in December 2007 that are about 30 and 20 cubic inches, on the way to 10 cubic inches-about the size of a box of checks. At the end of 2007 we'll do a flight test. Right now a radio that does TTNT and Link 16 is 1,000 cubic inches.

Avionics: What waveforms will it run?
Waller: It's going to run a couple of UHF waveforms, typically things like HaveQuick, UHF radio data modes, SADL [situational awareness data link] and EPLRS [enhanced position location and reporting system]. And in the L-Band, it will do Link 16, and in the upper L-Band, TTNT.

Avionics: Are these goals achievable, given the size and waveform development issues the JTRS program has had?
Waller: For starters, we selected a smaller subset of both frequencies and waveforms. We optimized the performance parameters, ranges and throughput we want. Our concept of employment is pretty tight. For DARPA it's in the medium-risk category. For anyone outside of DARPA, it would probably be high-risk.

Avionics: How can you produce enough power in a small package to achieve the desired ranges?
Waller: It's a challenge, you bet. We have some tricks up our sleeve to close the link with smaller amounts of power. A quarter of the full size is the power amplifier.

Avionics: What are the major challenges?
Waller: How are you going to do crypto key information assurance, for example. We're going to distribute crypto keys in a multiple independent level of security-type network. Size, weight, power and low cost are challenges.

Avionics: Is there a Quint waveform?
Waller: It will harness TTNT as the primary mesh network waveform. It is in the process of being certified and put in the JTRS library. TTNT is separate program at DARPA, which we built to do on-the-fly, ad hoc networking without preplanned bandwidth allocation. They basically can use up to 2 Mbits/s at any time they want, kind of like the Internet does for your computer. It's all shared, ad hoc and mobile. While planes are flying around at 500 miles per hour or faster, you can fly into and out of the net and get into the net within 5 seconds. MIDS JTRS is putting [TTNT] in as a single slot transceiver.

Avionics: Are there performance goals?
Waller: We want streaming video out to 40 miles, bomb damage assessment out to 150 miles. That's like a last, just-before-blowing-up picture from the nose of a weapon. We want 1,000 low data rate users and 100 high data rate users. That means that the advanced waveforms should support 1,000 weapons that are in the air at one time and at the same time support 100 video users.

Avionics: What data rates do you want, specifically? What will that buy you?
Waller: The low data rate is 10 to 20 Kbits/s. It would be sufficient for flight control and we can use it for voice over IP. The high data rate is somewhere around 1 Mbit/s. That will give you video.

Avionics: What are the technology assumptions of this program?
Waller: We need a global frequency plan, for example. If you don't have a frequency plan, you may not be able to train in peacetime. Or in Bosnia-[where] you're in close proximity to Italy-you may be colliding with Italian civil frequency bands.

Avionics: Is the frequency plan part of the Quint program?
Waller: Yes. When I started this program, I came up with seven trade study areas. One was frequency allocation. Each contractor had to identify where is there available frequency spectrum that we could-given that we build a piece of hardware that works-get approvals to operate at. We have a roadmap where we think we can drastically improve how the military uses frequency allocations. We have simulated [Quint] with 1,100 nodes, so there's enough bandwidth to get their communications needs met.

Avionics: Your literature mentions UCAV dynamic ground taxi. What's that and how does it fit in with Quint?
Waller: There needs to be a way an aircraft handler on [an aircraft] carrier deck, with a handheld device, could take control of a UCAV, or unmanned combat air vehicle, and move it around. In this example, the guy with the handheld starts the UCAV and moves it over to where it needs to be to launched. The handheld is the machine-to-machine link to the UCAV's flight control and engine computers. 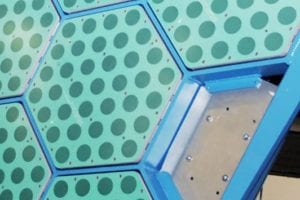