This is a tale of the best avionics in the world being used incorrectly and therefore ineffectively.

The story concerns weather radar and begins with the object lesson: All of the flight attendants wound up in the hospital as a result of the airplane's encounter with turbulence. The cockpit crew had requested a deviation from the normal flight path to take them around the storm, but they didn't detour far enough or soon enough.

The reason? The weather radar didn't show the convective weather ahead, most probably because it was not aimed down far enough to get a return from the rain. Therein lies the tale of a blank weather screen in the cockpit leading directly to broken bones and contusions back in the cabin. Details are contained in a Civil Aviation Department (Accident Investigation Division) of Hong Kong report released recently. The case involves a Dragon Airlines A330 flying from Kota Kinabalu, Malaysia, to Hong Kong on July 18, 2003.

At 41,000 feet over the Pacific Ocean, the flight crew requested and received permission to deviate right of track to avoid weather associated with tropical storm Koni, then about 170 nm southwest of Manila and moving west-northwest. The storm featured cumulonimbus clouds up to 45,000 feet, and moderate to severe turbulence was forecasted within 200 nm of the storm's center. The crew had flown the aircraft from Hong Kong to Kota Kinabalu earlier in the day, so they knew what they were getting into. With yellow and green returns on their radar, they initiated a 10-nm deviation. The fasten seatbelt sign was on, but the flight attendants were in the middle of a meal service when the aircraft encountered two pockets of severe turbulence. The aircraft was experiencing only light turbulence up to that moment, and insignificant weather was displayed on the weather radar. The flight crew's decision to illuminate the fasten seatbelt sign but to continue with the meal service was considered "not unreasonable under the circumstances."

The severe turbulence they encountered imparted both negative and positive Gs to the aircraft; the digital flight data recorder (DFDR) showed that the aircraft bounced between 40,800 feet and 41,600 feet.

Because the cabin staff was engaged in a meal service at the time, either in the aisles or in the galleys, some were thrown into the air, hitting their heads on the ceiling before falling back onto the cabin floor. All 12 were injured in varying degrees, from bruises to broken bones. The cabin staff, working in the rear of the airplane and the aft galley, suffered the greatest injury. Only three of the 236 passengers were injured because they were not belted in.

The cabin staff, all female, tried to secure themselves by holding onto fixtures in the cabin or galleys, but those who did not were hurled about. Ten flight attendants were slightly injured, eight of whom were subsequently released from the hospital on the same day. Two were discharged over the following two days, but the remaining two, who sustained serious injuries, were in the hospital for six to seven weeks.

Immediately after the turbulence encounter, the first officer was sent to assess the situation in the cabin, and the captain later did the same thing. The injured flight attendants received first aid from a doctor and nurses traveling as passengers.

The decision was made to continue on to Hong Kong, rather than divert to Manila (the weather was less favorable than at Hong Kong). At Hong Kong, five ambulances and three helicopters were positioned to evacuate persons to local hospitals. Since the turbulence encounter was at meal time, according to the investigation report, "a significant amount of debris, such as meal trays, food and beverage, crockery and broken glass, was scattered over the cabin floor."

"Cabin crew started to clean up the cabin while the aircraft was still in flight and covered the debris and broken glass with blankets to minimize the hazard to persons on board," the investigation reported.

There was minor damage to some interior fittings, but the airplane was sound, structurally, according to the post-incident special maintenance inspection of the structure.

Here is the telling part of the investigation report:

"The Mandatory Occurrence Report submitted by the PIC [pilot in command] stated that, during deviation around weather prior to the severe turbulence encounter, there were no weather returns on the weather radar display."

Recall that at some point the radar display was showing green and yellow returns. The aircraft was equipped with a Honeywell RDR-4B weather radar, a state-of-the-art instrument. However, like all radars, the strength of the return depends on the size, composition and amount of droplets. And water particles are almost five times more radar reflective than ice particles of the same size. According to the report,

"Above the icing level, ice crystals have minimal radar reflectivity. Although convective activities and turbulence exist at these levels, they do not show up readily on radar...As altitude changes or as the aircraft gets closer to the storm cell, the tilt angle [of the antenna] has to be changed so that the radar beam keeps scanning the most radar reflective area."

That area is forward and below the aircraft, where water is still in liquid form. For this particular scenario, the icing level was between 15,000 and 23,000 feet. Ideally, the radar beam would have been scanning below this level to pick up the more reflective water. The investigation concluded:

"It was therefore very likely that, with -1.75-degree tilt angle selected, the radar was `over-scanning,' i.e., the center of the beam was scanning above the most reflective part of the weather cells, hence no significant weather (red) returns were displayed on radar."

The question is why was the antenna not tilted down more? The investigation concluded that it was a training and awareness issue:

"Having reviewed the company procedures on the use of weather radar, the investigation team consider that, for the purpose of crew training, FCOM [flight crew operations manual] 3 is not sufficiently clear in its description of the recommended technique for operating the radar for weather avoidance. On the other hand, the Honeywell RDR-4B Forward Looking Windshear/Weather Avoidance Radar System User's Manual gives a clearer and more detailed description of the subject. However, both pilots stated that the Honeywell RDR-4B user's manual was not used during training and that they had not been given a copy of the manual."

The investigation recommended that the operator provide to flight crews "more details on the technique" that will give the best results when using the weather radar. Actually, all carriers ought to be enjoined to provide adequate instruction in the use of weather radar. Without such instruction, pilots may not be aware of the radar's capability or its limitations when the antenna is not tilted down sufficiently. It should be noted also that use of the weather radar was supposed to be briefed in line training, but it was not a practice item. However, practice under a supervisor's eye is what may be needed to make sure theory is translated into practical knowledge. The basic point is that the finest avionics in the world, such as this weather radar, are of little use without instruction in their use, as 12 injured flight attendants can attest. (For the full report, see www.cad.gov.hk/reports/main3.pdf)

David Evans can be contacted by e-mail @ devans@accessintel.com. 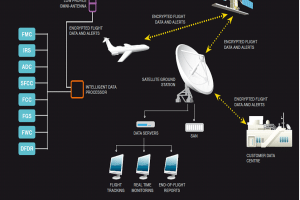