Has the U.S. aviation industry entered a "perfect storm"? That dire analogy is how one speaker at the recent Air Traffic Controllers Association (ATCA) conference described the current whirlwind of change taking place in the makeup and outlook of the U.S. aviation industry, in the U.S. economy, in FAA's transformation into a performance-based air traffic service provider within its Air Traffic Organization (ATO), and in the new budget realities the agency faces while making this transformation. If the analogy is accurate, the ATO is in the eye of the storm.

In the late October ATCA 2004 conference, speakers described the challenges commercial aviation and the ATO face. Though no doubt already aware of the challenges, conference attendees were provided, in a single event, perhaps the most comprehensive review of them. Keynote speaker, Secretary of Transportation Norman Minetta, reported that "by the end of this year, [air transport] traffic at the 15 major hubs in the U.S. will be back to pre-9/11 levels." He went on to predict that air traffic in the United States will "increase three-fold" in the next 25 years.

In addition to being more crowded, the national airspace system (NAS) is destined to become more complex. Patrick Graham, executive director of the Savannah-Hilton Head Airport in Georgia, told ATCA 2004 attendees that air carriers are "going more point-to-point," linking smaller cities to major hubs. Using his own airport as an example, he said, "Ten years ago, Savannah served just two cities; now we have 17 nonstop destinations to 14 major markets."

Graham also cited the growing popularity of low-cost carriers--now comprising "28 percent of U.S. air travel operations" -- and of regional airlines. "The number of RJs [regional jets] now is 500 [in the U.S.], but there are firm orders for 1,250 new aircraft, and with options, that number could well go up to 2,500 aircraft."

An ATCA 2004 panel on unmanned air vehicles (UAVs) discussed an urgent issue that only is beginning to be addressed. Incorporating UAVs into the NAS requires answers to some basic but critical questions, including: Can UAVs perform the same routine maneuvers (hold over fixes, stop and hold fast, be redirected by controllers, etc.) that manned aircraft perform? What type of training must a certified UAV operator have? Must he take the same flight physical as pilots? And, since UAVs can perform perhaps a wider array of missions in a greater variety of environments than manned aircraft, how can operational rulemaking be kept in check and not become unduly complex?

UAVs will exist in the NAS. Paul Olski, director of aviation joint planning and development in the Department of Homeland Security, said that the three Hermes 450 UAVs patrolling the Arizona-Mexico border were so successful that the agency plans to purchase "a number of Hunter UAVs." During a three-month test period, the Hermes, flying at about 15,000 feet at around 90 knots, spotted some 853,000 people crossing the border, according to Olski.

Air cargo carriers are looking at UAVs, too. Don Barber, senior vice president at Fed Ex, told ATCA attendees he believes that, though unmanned air freighters "may not be ubiquitous soon," UAV cargo transport "will be a demonstrated reality" in the near future. Currently some 20 percent of all air cargo is transported over national borders. But he anticipates that 80 percent of air cargo will be transported globally over the next 10 to 15 years, due largely to outsourcing in manufacturing.

So the ATO can count on funds to accommodate these and other dramatic changes in NAS use, right? Not exactly. Enter the new economic realities.

Revenues for the Aviation Trust Fund, which derives mainly from an airline ticket tax, have declined, as the average price of a ticket has fallen 31 percent over the last four years. Eighty-five percent of FAA's funding comes from the Trust Fund. The remainder comes from a general government fund, which will offer little relief because of the growing obligatory cost of homeland security, the war in Iraq and the staggering national debt.

Can ATO navigate safely through this fiscal storm? "We have to do more with less," said ATO chief, Russ Chew, at the conference. New technology can help. Integrated flight plan processing and a communications network, for example, would help consolidate FAA's air route traffic control centers. Other measures could be taken, too, but they will require tough decisions. We see the storm. Now the industry must work together to steer clear of it.

UAVs in Europe: When Will They File and Fly? 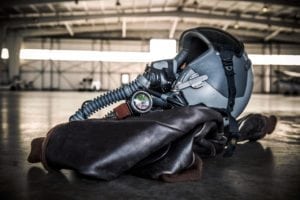