But basic technical challenges must be solved before the vision can unfold. Questions about the GIG's affordability, institutional feasibility and security abound. Protecting the thousands of systems plugged into the GIG--an area known as information assurance (IA)--is a bedrock issue, identified in a recent General Accounting Office (GAO) report.

Other challenges include "quality of service"--ensuring that the most important information gets through on time despite the network's constantly changing landscape, as nodes move out of alignment, are masked by terrain or go down. Information routing and network management in a dynamic environment are also issues, along with scalability and survivability.

"Our vision is to take the [Link 16] J-Series message and pass it not only via Link 16 but via an IP-based waveform referred to as WNW-Tacair, being pursued by the Joint Airborne Networking-Tactical Edge initiative," says Col. Rory Quesinberry, chief of the Air Force Airborne Integration Division. IP "brings global connectivity to the kill chain," he says. (WNW, the wideband networking waveform, is the centerpiece of JTRS.)

The National Security Agency is developing data protection technologies under a $4.8-billion Cryptography Transformation Initiative. It is part of a wide-ranging information assurance program expected to produce such items as IP encryptors, firewalls and intrusion detection systems.

High-assurance IP encryptors (HAIPEs), for example, will be embedded in JTRS radios. The software modules are designed to encrypt messages at the packet level--up to the message header--enabling "end-to-end encryption" from sender to the receiver. General Dynamics and Harris Corp. also are developing algorithms for two JTRS encryption chips.

It also may be necessary to "firewall" JTRS radio channels from each other if they are sending information at different classification levels. Multiple independent levels of security (MILS) or multilevel-secure (MLS) approaches may be required internally to separate classified from unclassified data.

JTRS is expected to use "double encryption," i.e., encryption of both the information and the transmission link. Some experts also are proposing the use of public key-based encryption to handle some of the network management information. Many organizations are working on the information assurance piece of JTRS and other portions of the GIG, but it will be a complex and evolving solution.

The wideband networking waveform, a dynamic, packet-switched technology envisioned as the JTRS backbone, eventually will replace the dozens of waveforms used today. WNW is widely regarded as being too slow to support ad hoc fighter aircraft targeting networks. Yet WNW nevertheless will be "orders of magnitude faster" than waveforms such as the U.S. Army's ground-based single-channel ground and airborne radio system (SINCGARS), says Ken Peterman, vice president of business development for Rockwell Collins' Government Systems Group. Collins and BAE Systems are the radio developers under the JTRS Cluster 1 procurement for Army helicopters and ground vehicles.

WNW, with four signals in space, is expected to support end-to-end throughput of 5 megabits/s. It will support military communications from 2 MHz to 2 GHz. Operators will manually "shift gears" between the signals, depending on the operating conditions in the tactical environment. The signals are understood to include:

The JTRS joint program office (JPO) has approved the delivery of the first WNW increment, which will be tested as part of the lead-up to the JTRS "early operational assessment," beginning in December.

In the foreseeable future, while legacy radios still abound, JTRS radios programmed with both legacy and WNW waveforms will act as hubs and routers, explains Col. Steven MacLaird, program director of the JTRS JPO. A JTRS radio, for example, is expected to be able to tie into current enhanced position location reporting system (EPLRS) and SINCGARS networks, aggregate EPLRS and SINCGARS data, and redirect the information through the higher-throughput WNW. The WNW can transfer information via Internet protocol packets back to other systems within the GIG. "It can talk to anybody with an IP address," MacLaird says.

But WNW has limits. It is designed to guarantee network connectivity between airborne platforms at speeds up to 900 knots, according to a 2001 functional description document. Integrating 150 nodes into a single network could take 15 minutes, and adding an incremental node could take almost a minute. Fighters forming a network to take out a pop-up target would need a different technology.

Among the candidates for this low-latency, anti-jam networking waveform are:

The Joint Airborne Networking-Tactical Edge program--still in the early stages--will decide which of these or other alternatives to pursue, says Quesinberry.

The TTNT program envisions rapid targeting. If an aircraft sees a Scud launcher emerge from a cave, for example, it needs to form a network with other "friendlies" in seconds, triangulate on the target, and hit the weapon before it fires. This calls for near-instantaneous network formation and data dissemination.

TTNT aims to form a network between aircraft about 100 nm apart--perhaps as much as 300 nm apart--pushing data at 10 Mbits/s. "You'll get a dial tone in less than 5 seconds," claims Air Force Maj. Stephen Waller, TTNT program director. The research agency hopes to achieve an end-to-end message time of 2 milliseconds for short data bursts and about 20 milliseconds for streaming video. The network is intended to support from 200 to 1,000 active users. It works in tandem with a targeting/geolocation algorithm known as AT3 (advanced tactical targeting technology).

Like the wideband networking waveform, TTNT is based on the Internet protocol. Position reports on the location of nodes--necessary for line of sight communications--arrive courtesy of an application embedded in the IP protocol. DARPA plans next summer to demonstrate a 15-node network--three to four ground systems and seven to eight airborne systems--exercising IP addressing, frequency bands and crypto technologies, among other things.

TTNT promises to network aircraft at combined speeds of greater than Mach 8. What happens to the data at such speeds? Waller claims the signal has been optimized "so it's less subjected to Doppler shift." (Doppler shift refers to changes in wavelength in the electromagnetic spectrum as the sources of emissions move closer or farther away.)

TTNT is a potential companion to WNW. "We would like to use the upper four layers of WNW in the IP stack and let TTNT do its best performance in the lower layers," Waller says, referring to the seven-layer data communications model. So TTNT could add a "fifth gear" to the WNW transmission system. DARPA is eyeing three JTRS niches: Cluster 1, the ground vehicle/rotorcraft buy; the airborne and maritime/fixed-site procurement; and the multifunction information distribution system (MIDS)/JTRS effort to make Link 16 JTRS-compatible.

The TTNT network also will be "self-throttling," Waller says. It "will self-adjust by knowing how much people are talking," managing throughput based on priority. Throughput will be further augmented by the ability to talk and listen on diverse frequencies.

Though designed for air-to-air networking, TTNT could play an air-to-ground role, as well. "We want to make sure that people on the ground can talk to the planes," Waller says.

Some observers say TTNT will succeed Link 16, today's networked tactical targeting waveform. A Link 16 network has to be set up days in advance, and must be synchronized--down to the millisecond level--because of bandwidth constraints. Its throughput, while respectable, is consumed by sending the same data over and over again to make sure it gets through in a high jamming environment. A TTNT network, on the other hand, is to be established in seconds. With TTNT, "there is no advance planning whatsoever except to have the same crypto variable," Peterman says. Adds Waller, Link 16 is more of a "push network," while TTNT is more of a push/pull network.

Nevertheless the older Link 16 waveform, now being fielded in MIDS boxes to F/A-18s and other aircraft, is breaking new ground. Super Hornet pilots in Iraq used the machine-to-machine link to cooperatively engage ground targets. The pilot of a forward area controller (FAC) F/A-18F, for example, equipped with an advanced targeting forward-looking infrared (ATFLIR) system and a joint helmet-mounted cueing system--"looks at the target, slews the ATFLIR, designates the target on the MIDS box and sends [the designation] to other strike aircraft" via Link 16, explains Capt. Donald Gaddis, F/A-18 program manager. When the receiving pilot accepts the designation, his helmet and ATFLIR slew to the same target, so there is no mistaking it.

"The beauty of it is that these airplanes can be 20 miles away from the target, ingressing toward the target, and--through the machine-to-machine interface--their sensors are already slewed to the target," Gaddis says.

He also wants to build synthetic aperture radar (SAR) maps using the Super Hornet's active electronically scanned array radar, currently in developmental flight test. And Gaddis wants to get the maps to the CAOC for use in precision targeting, with equipment like today's "RainDrop" precision targeting workstation. This, however, will require a wider-band waveform.

The F/A-18 program office also wants Super Hornets to be able to use SAR maps internally to produce target coordinates. "Right now, RainDrop-type capability is being done in the [combined air operations center], and that takes time," Gaddis says. In Iraq for example, armed aircraft sometimes "saw the target, but they couldn't drop because the [operations center] wasn't fast enough to get the target coordinates to drop on."

To add this ability, Super Hornets will need mass memory storage units, solid state recorders and imagery exploitation devices, items that are on the aircraft's technology roadmap. If the forward area controller aircraft has this equipment, it can send "mensurated," or mathematically measured, target coordinates over Link 16 to other Hornets that may not have the advanced radars or imagery exploitation devices, Gaddis says. There's even a Link 16 maintenance angle. The Navy recently demonstrated, in a laboratory simulation, that F/A-18 built-in test (BIT) data could be sent to a ground station over Link 16. The BIT data, downloaded into the aircraft's automatic maintenance environment (AME), caused AME to generate maintenance action forms. Gaddis hopes to field such a capability by 2008, assuming that ships are set up with appropriate Link 16 environments.

Information Superiority From Bottom Up

The Future Combat Systems (FCS) program, designing the U.S. Army's next generation of manned and unmanned vehicles, will rely on data links and networks to increase situational awareness on the battlefield. At the low end of the scale, platoons will use small, data-linked unmanned air vehicles (UAVs) to spot threats over the next hill and call down weapons on targets.

MAV carries an electro-optical or infrared sensor and can provide streaming video--with a 200-millisecond time lag--over an L band data link. The vehicle is designed to be fully autonomous, but operators can modify behavior at waypoints and reorient sensors while the vehicle is in flight.

The Army plans a two-phase demonstration program to explore MAV's military utility. Honeywell first will develop Phase 1, gasoline-powered vehicles, which will be tested by the 25th Infantry Division next year. Experience gained from the UAVs will be folded into the design of a Phase 2, diesel-powered vehicle to be delivered in 2006. Honeywell also has built a SMARTlab modeling and simulation facility to focus on net centric applications. A "virtual MAV" is already being "flown" there, using a real ground station, to help develop tactics and procedures, evaluate the user interface and gather feedback on system operation that can be folded back into the program.

The following are some of the major initiatives in the U.S military relating to the Global Information Grid (GIG): 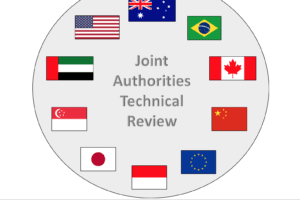 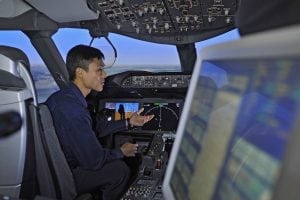